"IT'S ALL IN THE GENES" - Mink (North American)

Well the mink that appeared in the August 4, 2022 blog, "No Two Minks Are Alike", returned to the creek later in the week and this time, to fish. And my goodness, fish he did. He caught three fish in a little over an hour. All devoured in situ but under cover. I managed to capture the first success (Photo #5) and that's no small fish. That's another member of the invasive species, the Prussian Carp, removed from the eco-system.

Going from my previous experience and familiarity of the minks that have been fishing in this creek for the past five years, I suspect (and it is only a suspicion), this male mink is last year's offspring, the largest of the three. His mother was born just downstream and she had her own den close by last year, when she had the three kits. She had excellent fishing abilities and had no trouble providing for her brood, bringing all three to maturity.

Unfortunately, there has been no sign of Momma Mink this year. There didn't appear to be any evidence of her during the Winter either. Perhaps, she moved dens or maybe something more dire occurred. But this large male is now using his mother's old fishing grounds.

I have included as Photo #7, a photo of "Sparky" from last year (that's what I named him), just a few months old and on one of the kits' first fishing expeditions out. He was the only one that caught a fish in the creek that day & yes, it was another large Prussian Carp. As you can see from the photo, he was one extremely happy mink dashing off with his catch. I don't know if his mother made him share with his siblings. :)

Even at a young age, he was a large mink and the shape of his face & ears bear a striking resemblance to the most recent photos. Add into that equation, the location of his fishing grounds & his fishing prowess - well that's what led me to believe this is the same mink, now fully mature. Only a DNA test would tell definitively and of course, that's just not possible.

In the scheme of things, it doesn't matter who his mother was but whoever or wherever she is, she should be proud of her son. Hopefully, he will pass on those genes to future generations and keep up the tradition of eco-warrior going forward!

And yes, I named him "Sparky" the day last year he caught that fish. With the look on the kit's face that day jumping from boulder to boulder, fish in mouth, it was all about the "sparkle"!

PHOTO #1 - This is what happens when you play "peek-a-boo" with a mink. (And then he just quietly turned and walked off into the rocks.) 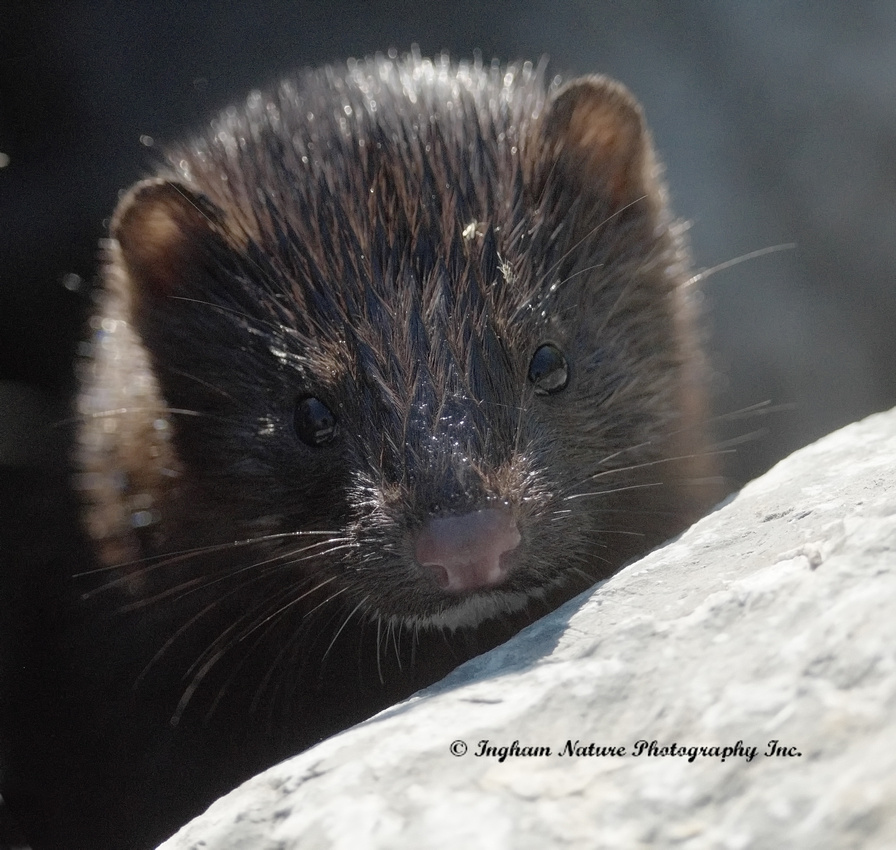 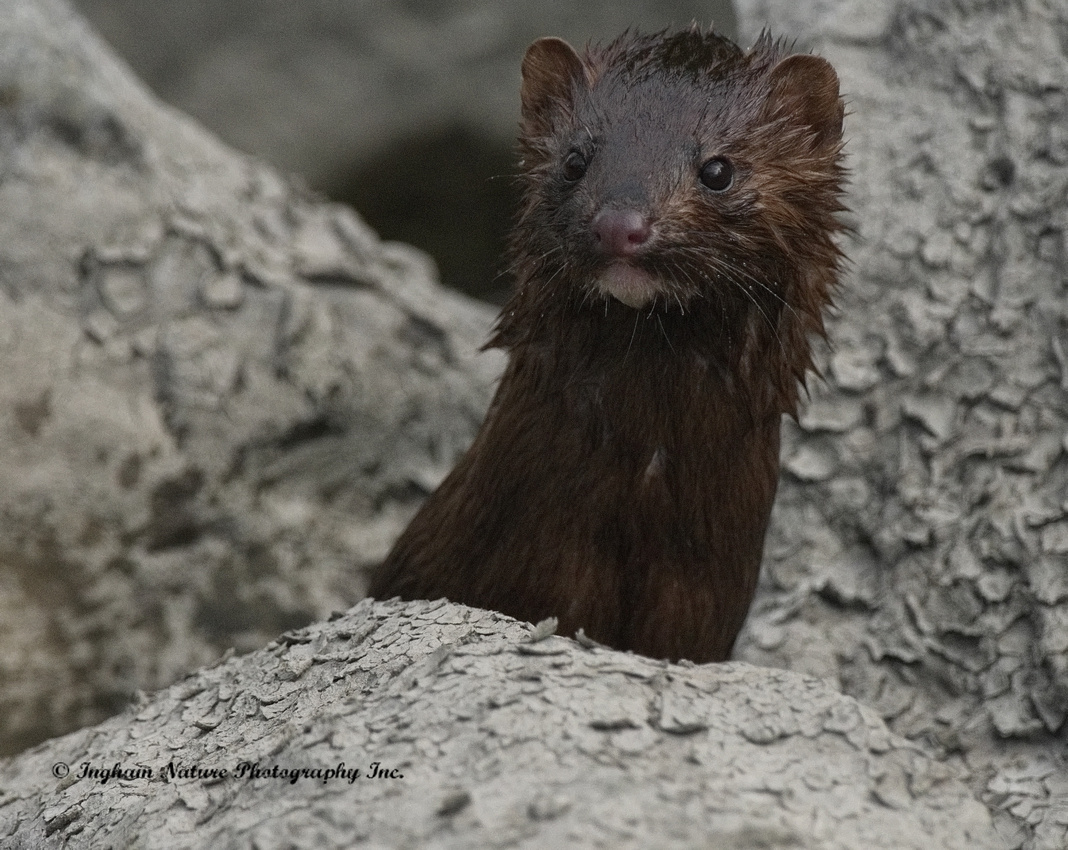 PHOTO #3 - Someone looks like they were partying, some leftover streamers?? (Perhaps a celebration of successful fishing!) 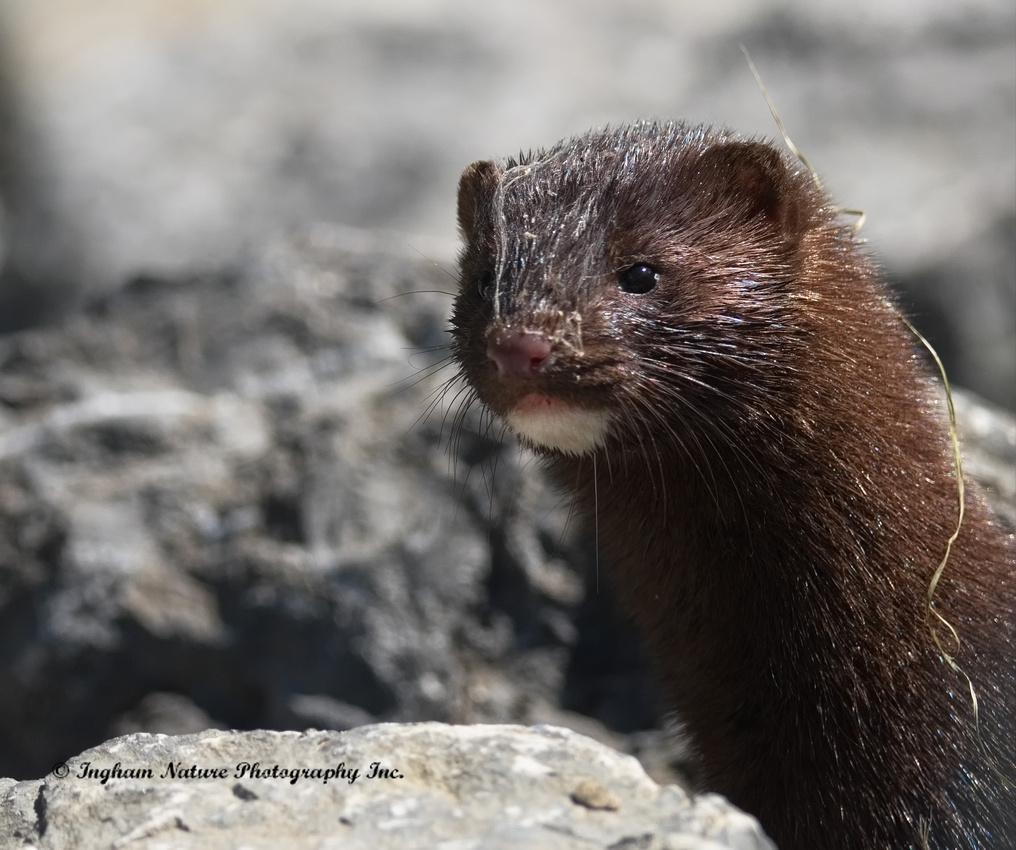 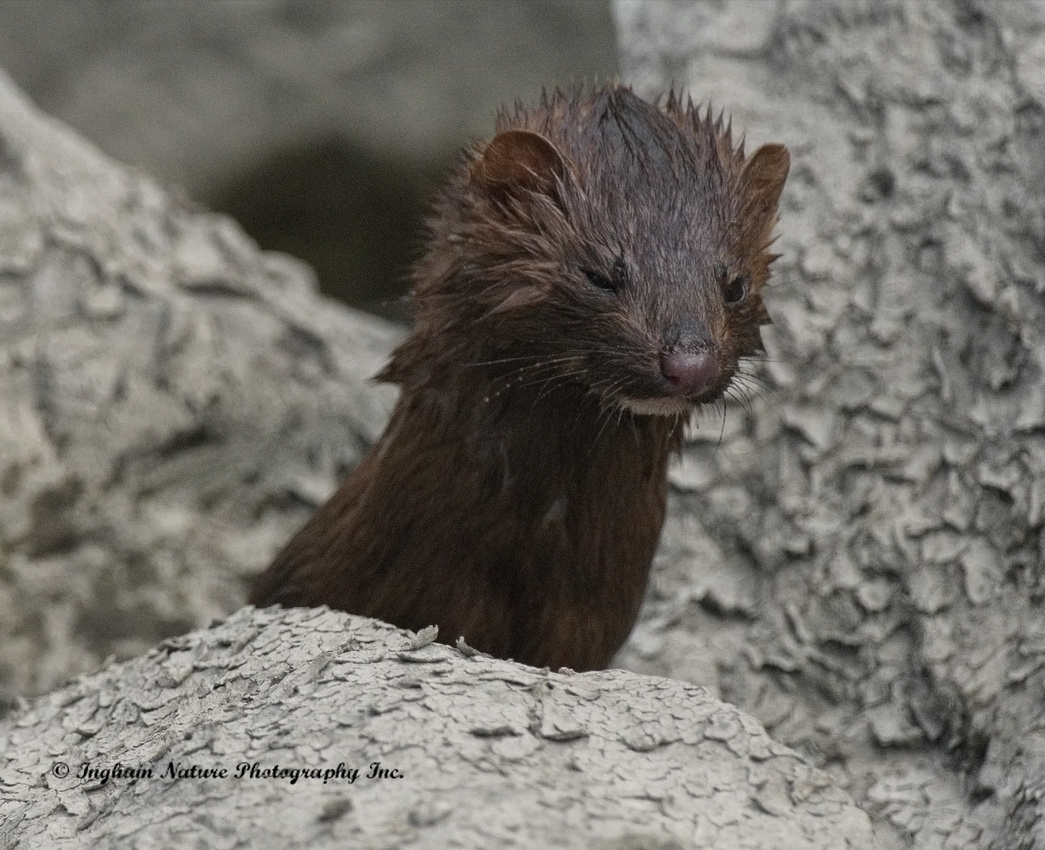 PHOTO #5 - Sparky's catch this year, August 2022. Yep, he caught a big one. That's another Prussian Carp down. 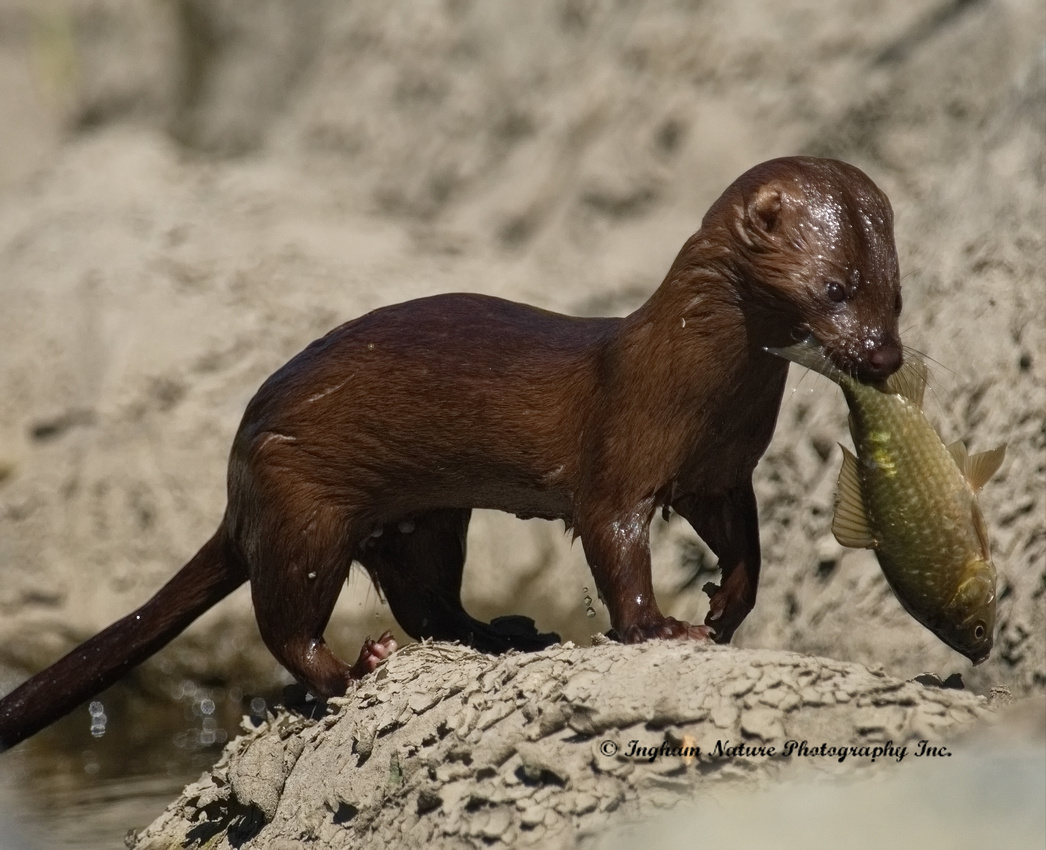 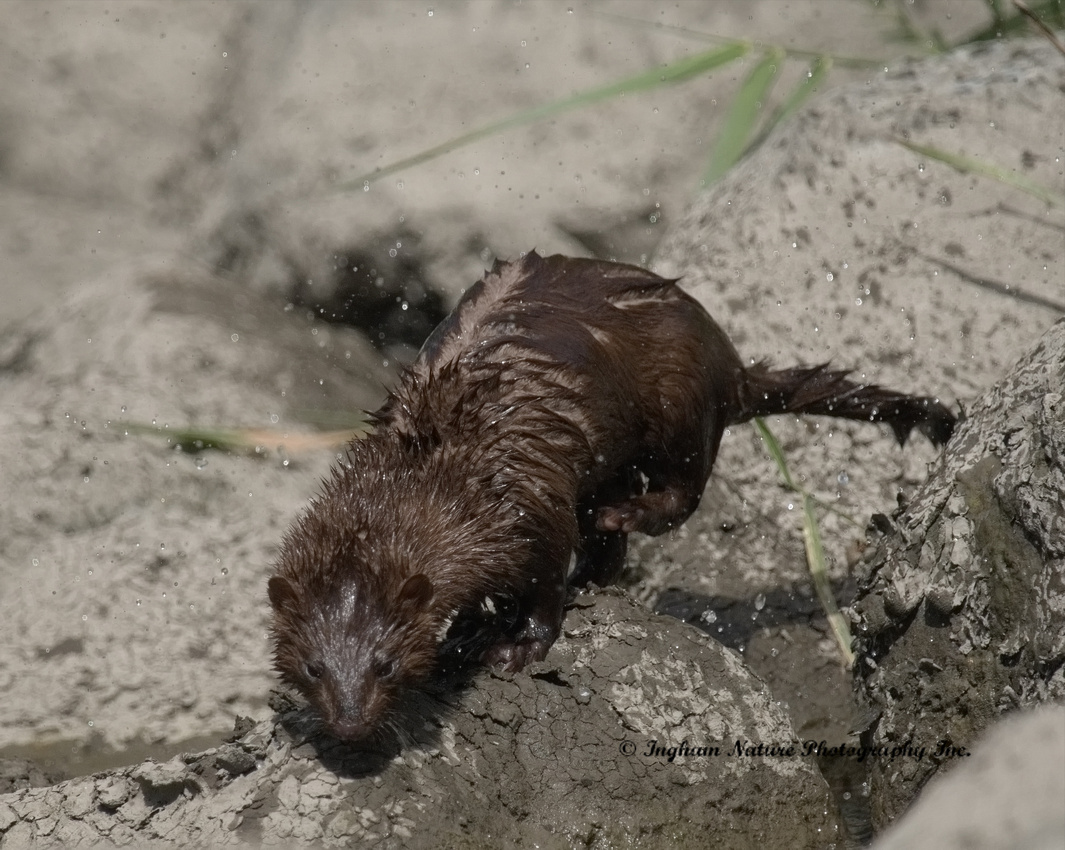 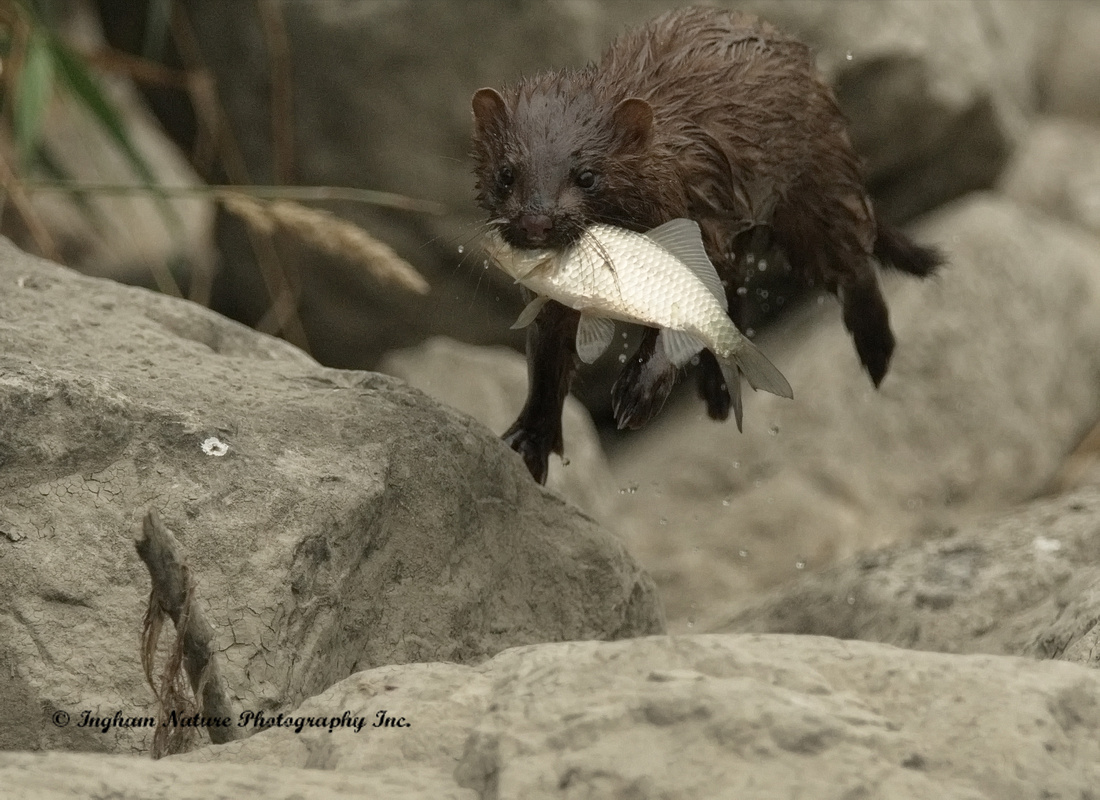