NOTE:  THE PHOTOS THAT FOLLOW WERE TAKEN FROM A SAFE DISTANCE & LOCATION

Using the line from that "Travel Alberta" advertisement, "Remember to Breathe" goes for both the photographer & the Grizzly Bear in this instance.

On a different day (you can tell from the sunshine) than the blog of July 23, 2022, this young bear was seen as it crossed over into a meadow looking for greens. I am going to designate the bear as a "he" as he seems to have those facial and body size look of a male but you never want to get that close to a bear to definitively designate its gender. :)

However, I have nicknamed him "Fluffy", firstly because of his very fluffy & thick coat (probably still shedding) and secondly as an homage to Hagrid's three headed dog, from Harry Potter & The Sorcerer's Stone.

And he definitely was on a feeding mission. Sometimes not even taking the time to pause and chew but ripping the dandelions & grass from their roots and munching as he walked along (Photo #4). He did, however, take time out to rub against a tree, leaving his scent (Photo #6)  and then sitting down to have a good old scratch (Photos #7 & #8).

Spring came late this year to the mountains in Alberta, with lots of snow pack, snow into late Spring and a slow melt. Great news for potential flooding downstream but it meant that the bears who generally have moved up into the higher meadows by now are still down at the lower levels because of the late arrival of flora, such as their favourite dandelions. Like the bears, all the dandelions by July usually have gone but because of the late Spring arrival, the meadows are still quite full of the yellow flowers and their succulent green stalks.

Wishing this young bear great success and health as he makes his way up the mountains to Summer pastures. 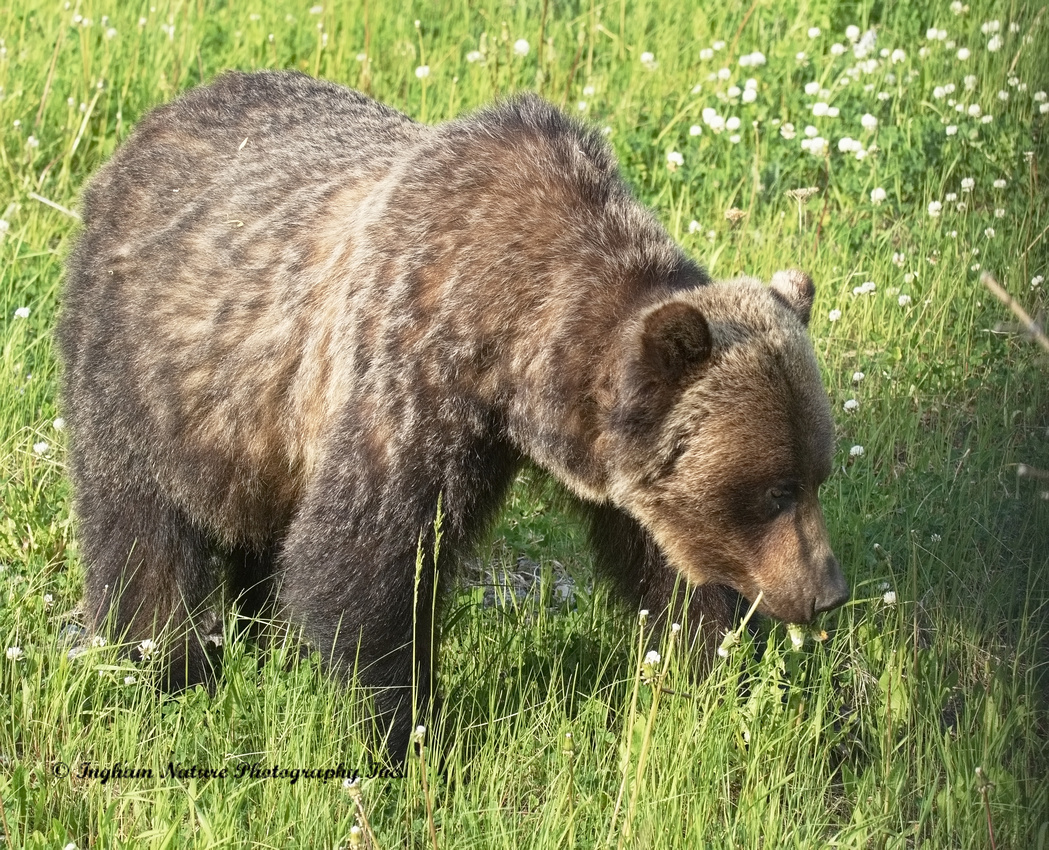 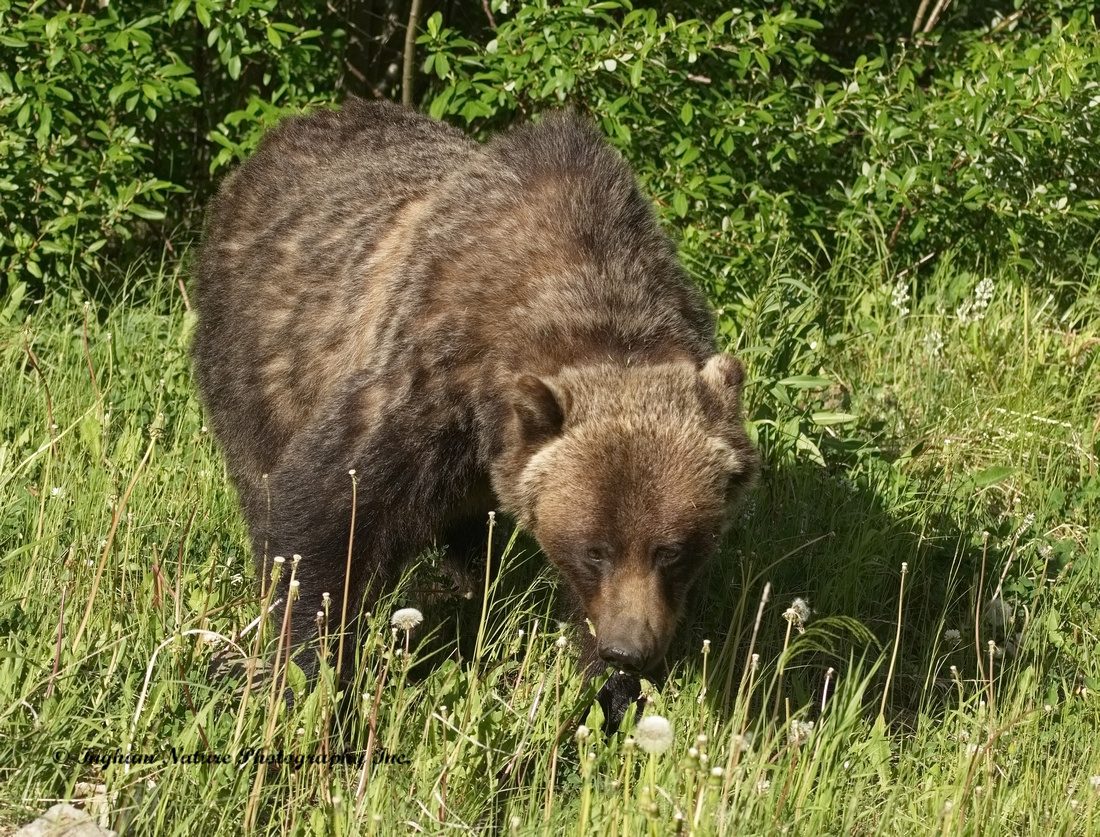 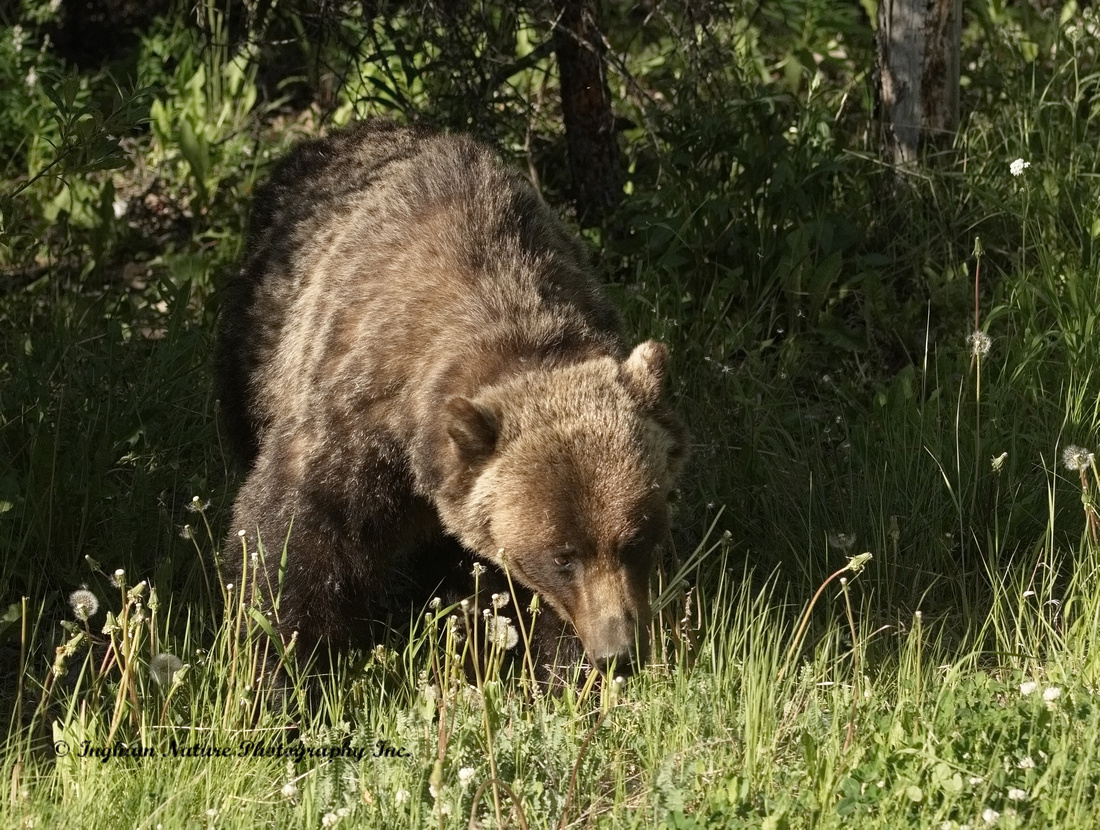 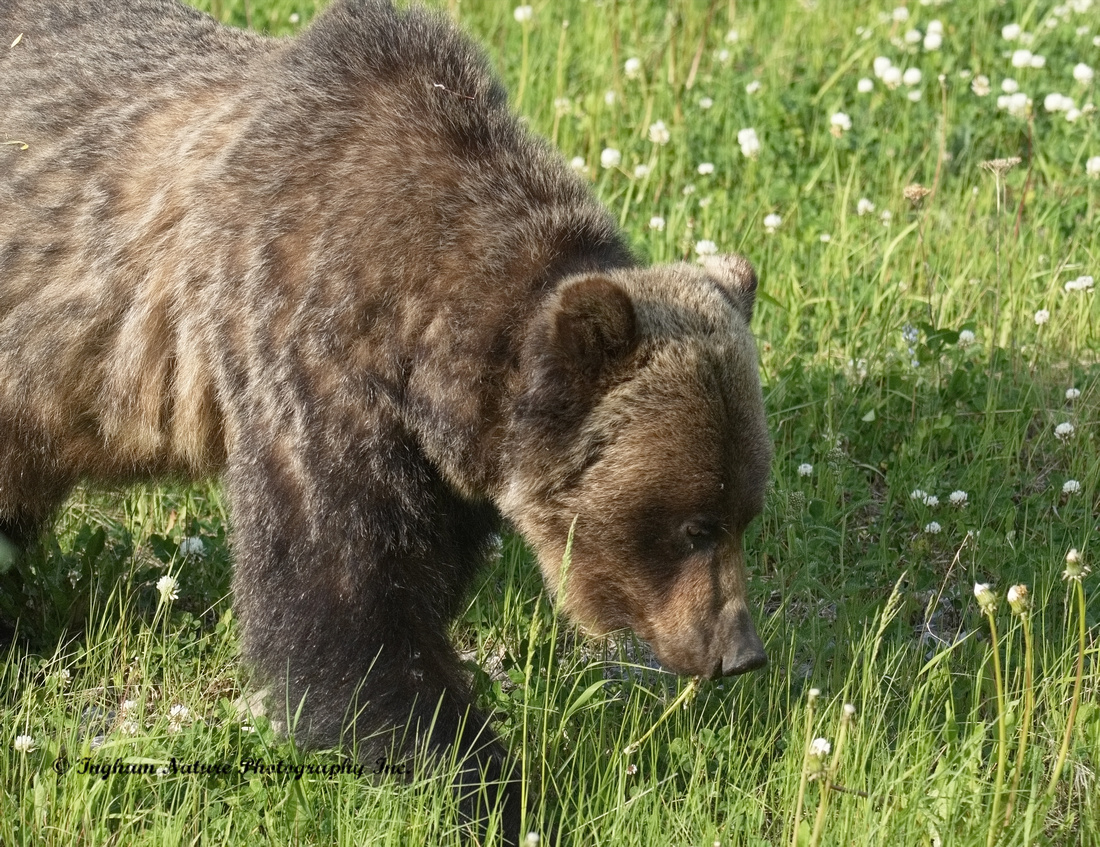 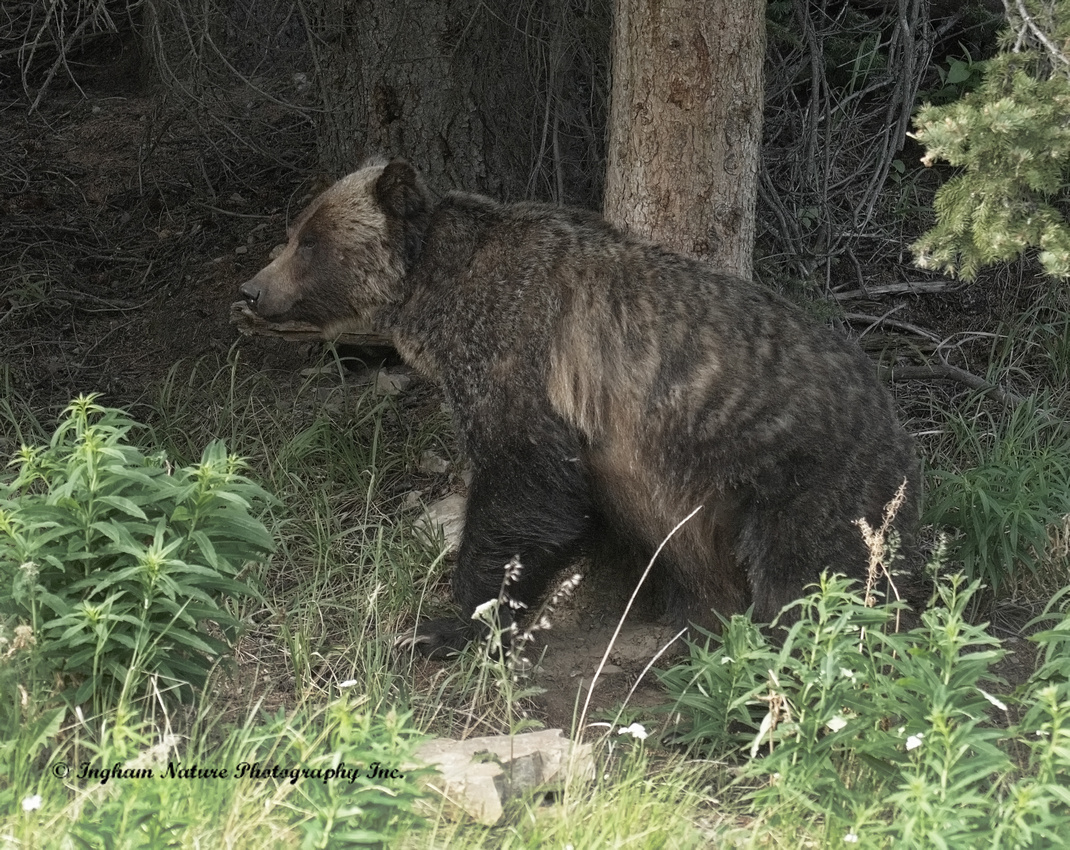 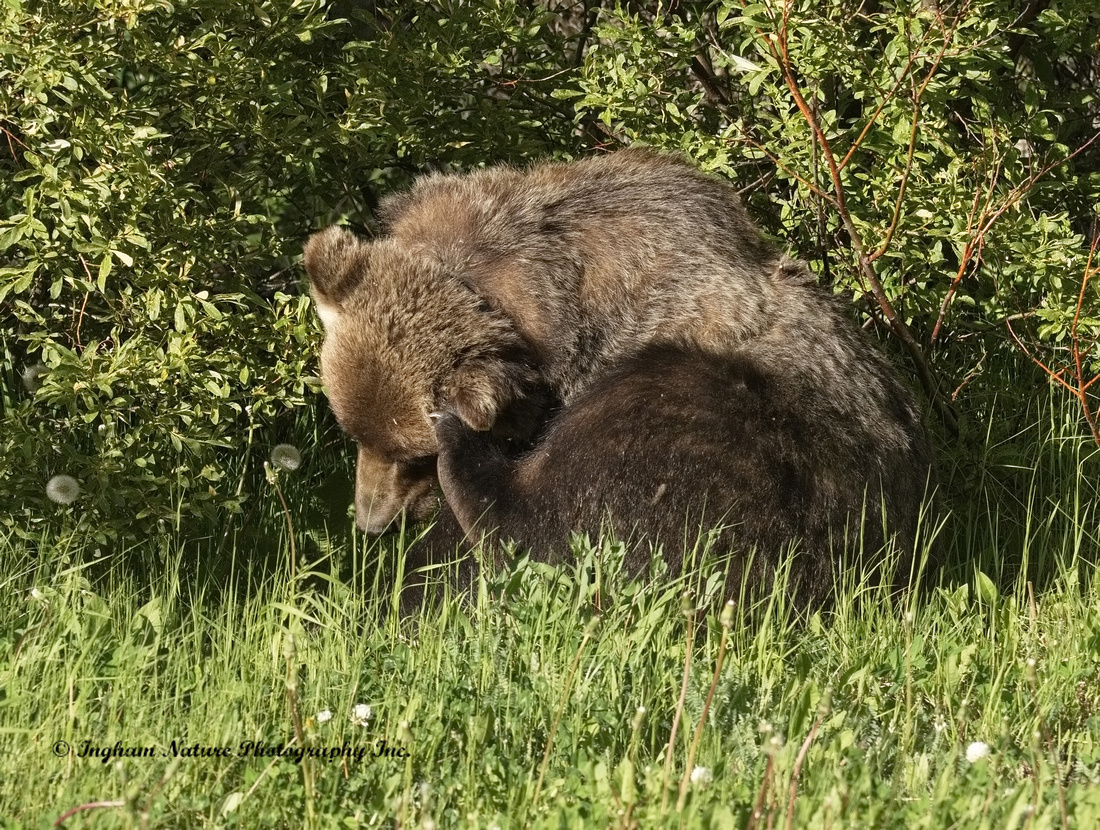 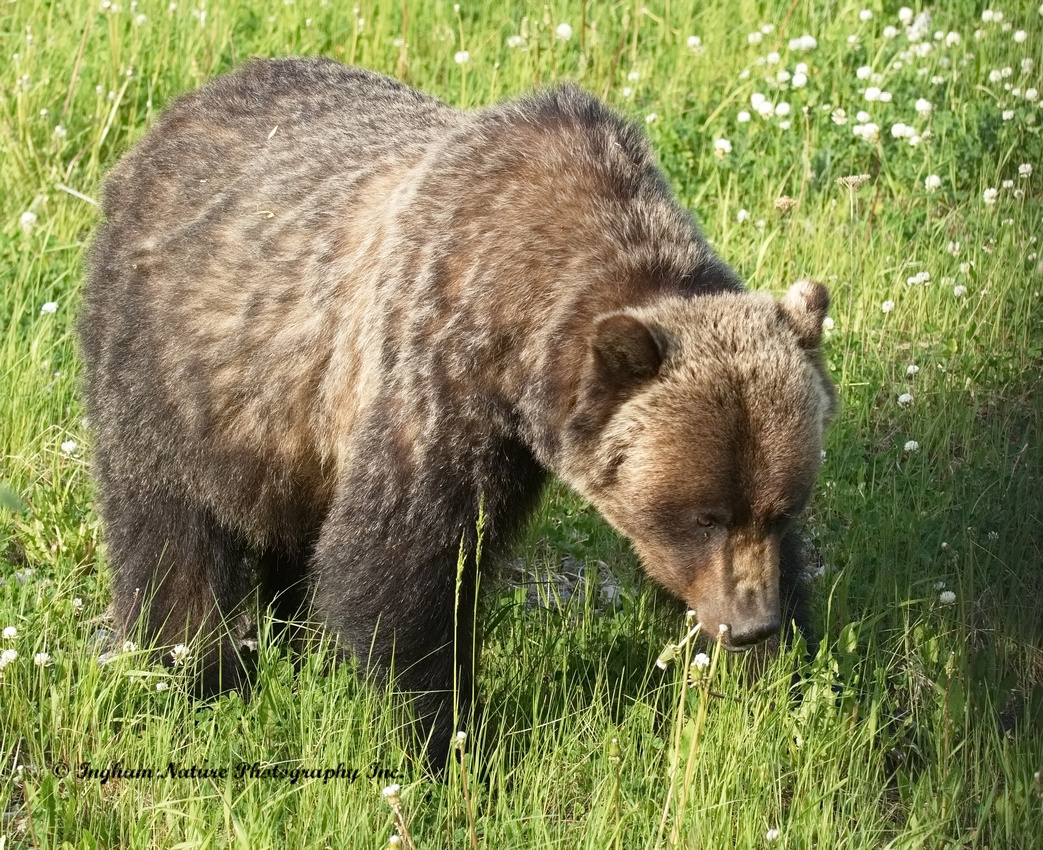