"A TALE OF TWO CULVERTS"

This is a tale of two culverts (not two cities). Photos were taken just before & after sunset.

The beaver family that dwell in a series of storm water ponds, who number at last count at six, also use a small isolated pond close to a river. There is a drainage system with a culvert at each end which runs under the paved walking path and then runs out to an inlet, which then leads to the river. The culverts are covered by very heavy large metal gates approximately 3 1/2 feet in height and probably 4 feet wide. Now you are probably wondering why I am going into some detail.

Well, in order to maintain the water level in the small pond, the beavers do their usual beaver activity of covering the slats in the gates with logs, branches, mud and stones. There is, of course, some water that travels through the system that enters the river eventually.

Every so often, the park's maintenance crew removes the "debris" from the culverts and pushes it aside. Not a problem when the blockage is done from the outside. Walking along this path in early Spring I looked to the west side and yep, there was the debris neatly piled up above the gate. Not a problem for the beavers, they would be back on nightshift and replace it.

Then I looked at the east side and what I saw made me smile. The beavers had done the same work on that culvert but had done it from the inside. In fact, there was a huge log sticking out from behind the gate through one of the slats. "I don't know how you's done it, but I know you's done it, beavers!"

In order to remove that debris, it was going to take some rather large equipment to lift the gate and remove it, to get to the log/mud pile behind it. Needless to say that months later, the beavers' work remains intact. So I guess if one was keeping score, that would be Team Beaver 1, Team Human 0.

Because of the beavers' engineering of the series of ponds to the west & north of this one, it has created a huge network of waterways and channels for birds, ducks, mammals such as the muskrat (and the occasional mink has also been seen). Even when there is little rain, there is now ample water in these ponds for wildlife.

The first set of photos are of one of the adult beavers doing some work on the west side culvert. He/she then went off to enjoy some relaxation on the grassy bank. It was soon joined by a smaller beaver (who I assume is last year's offspring). There was some communication between the two and there is something a little heartwarming, if not heart wrenching, when you hear the soft mews of beaver talk. 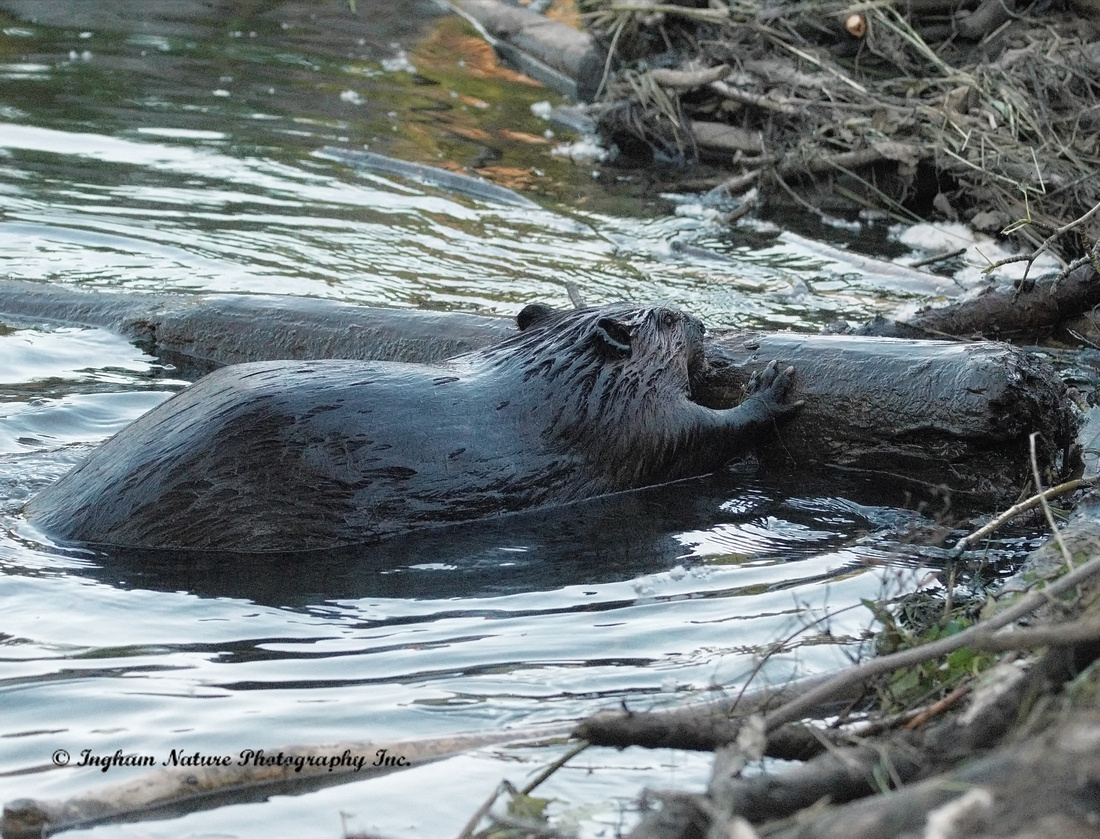 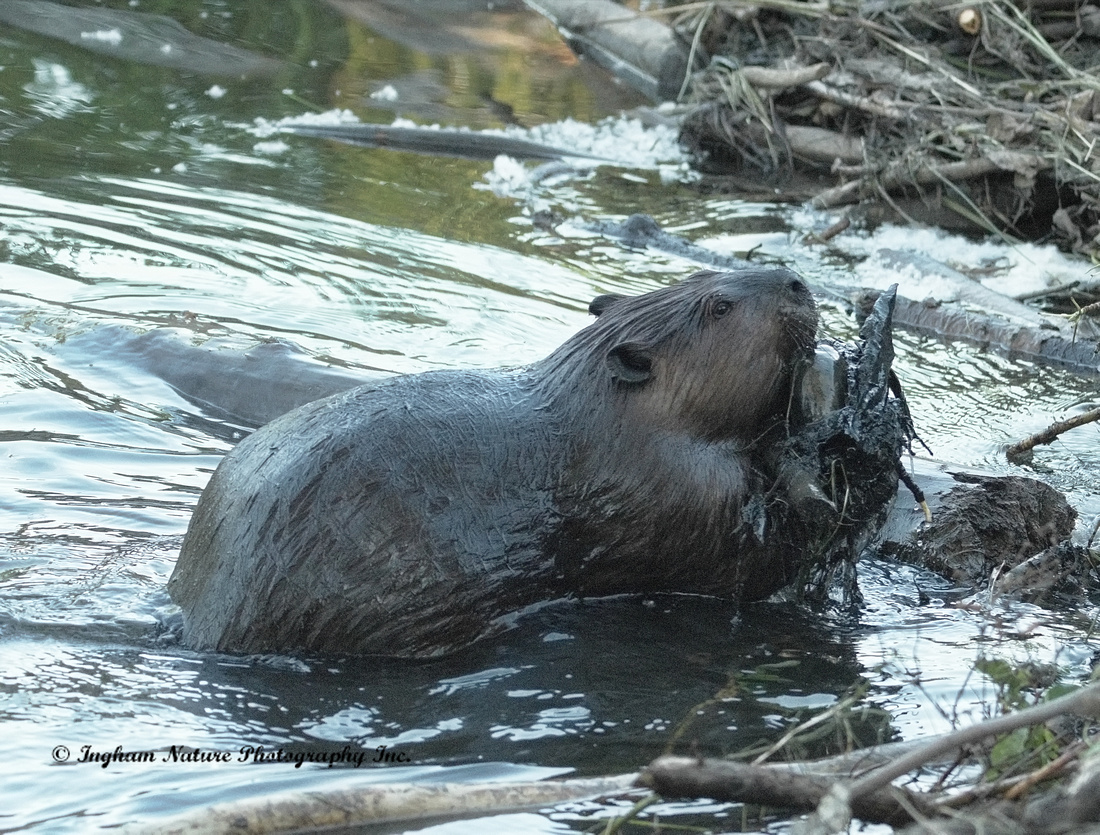 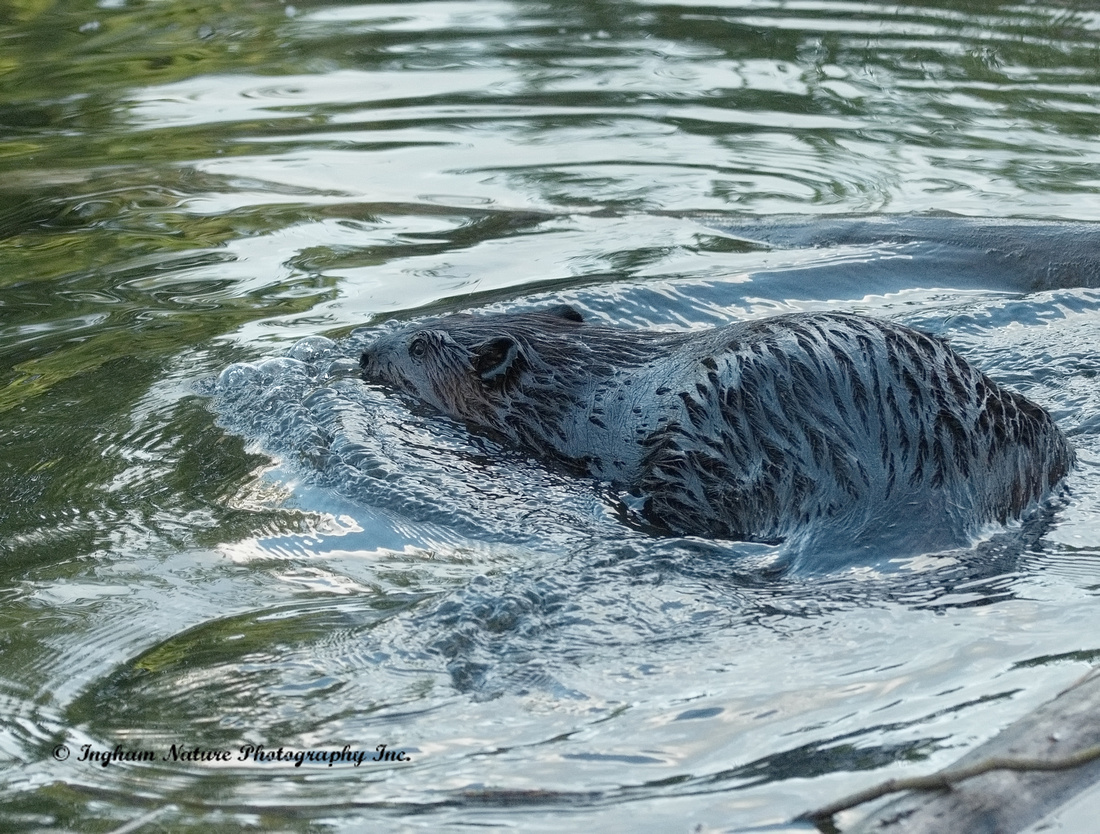 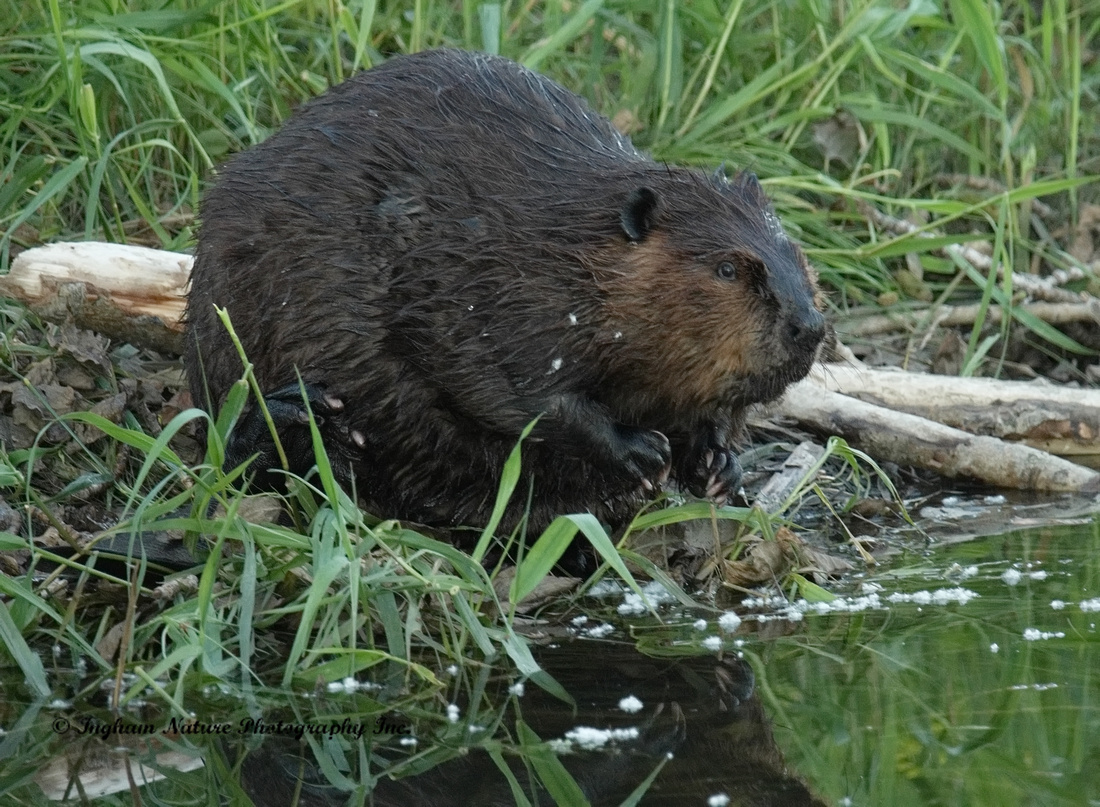 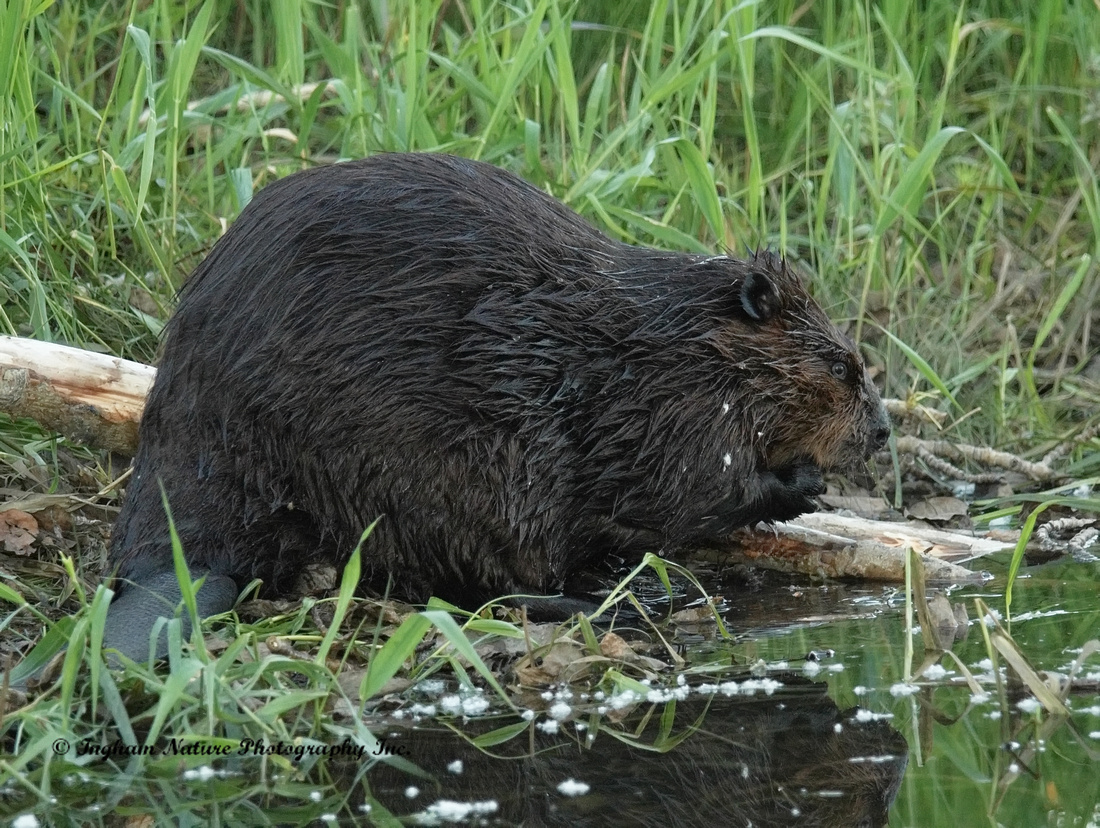 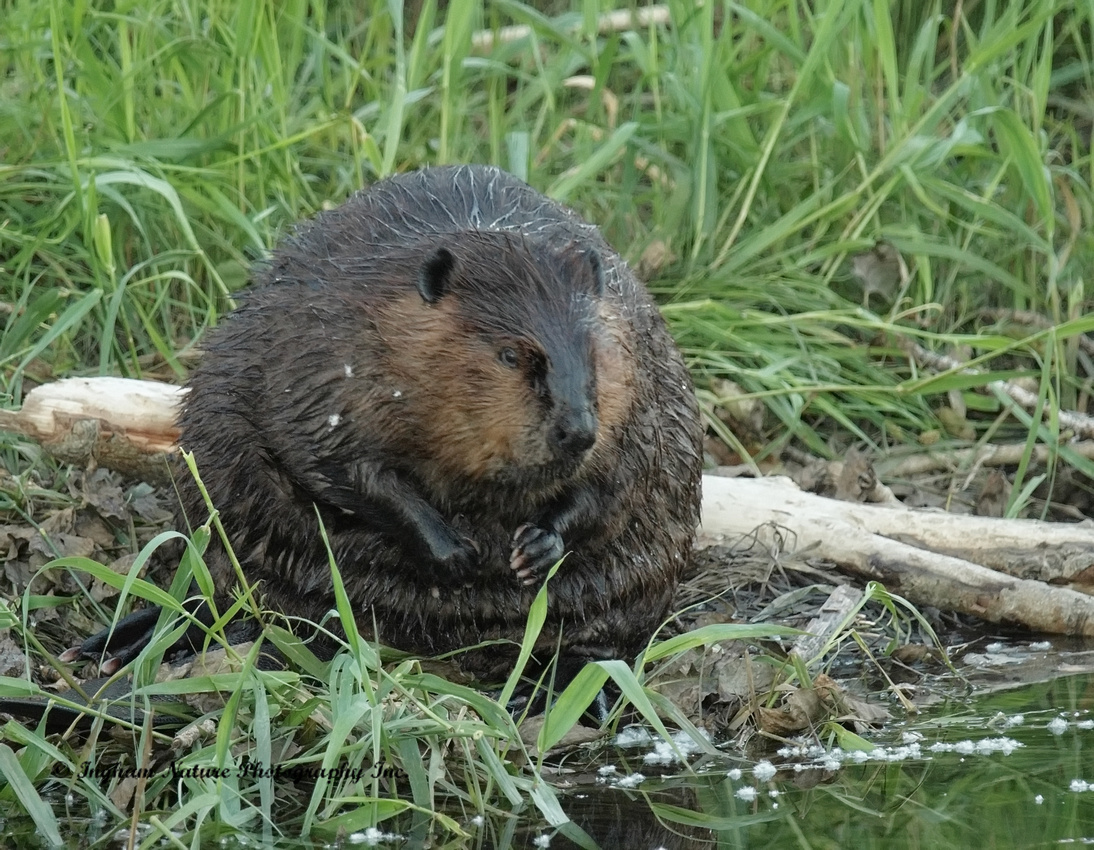 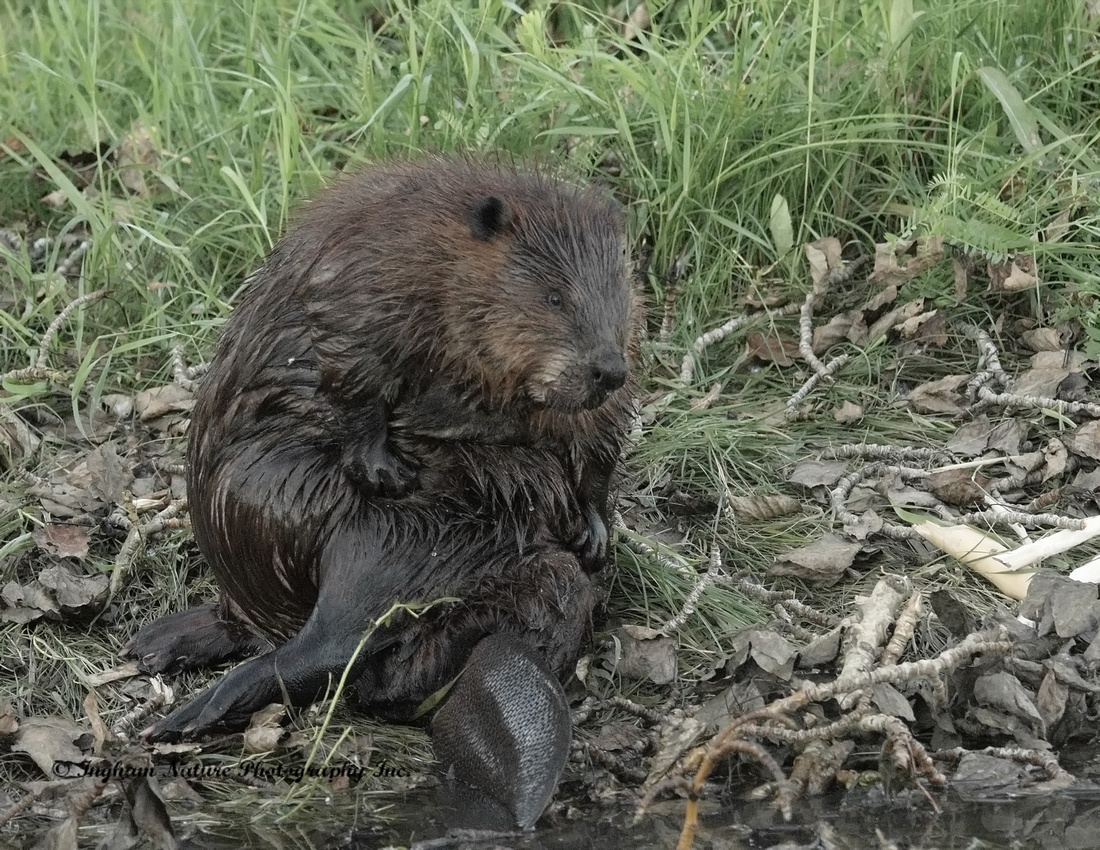 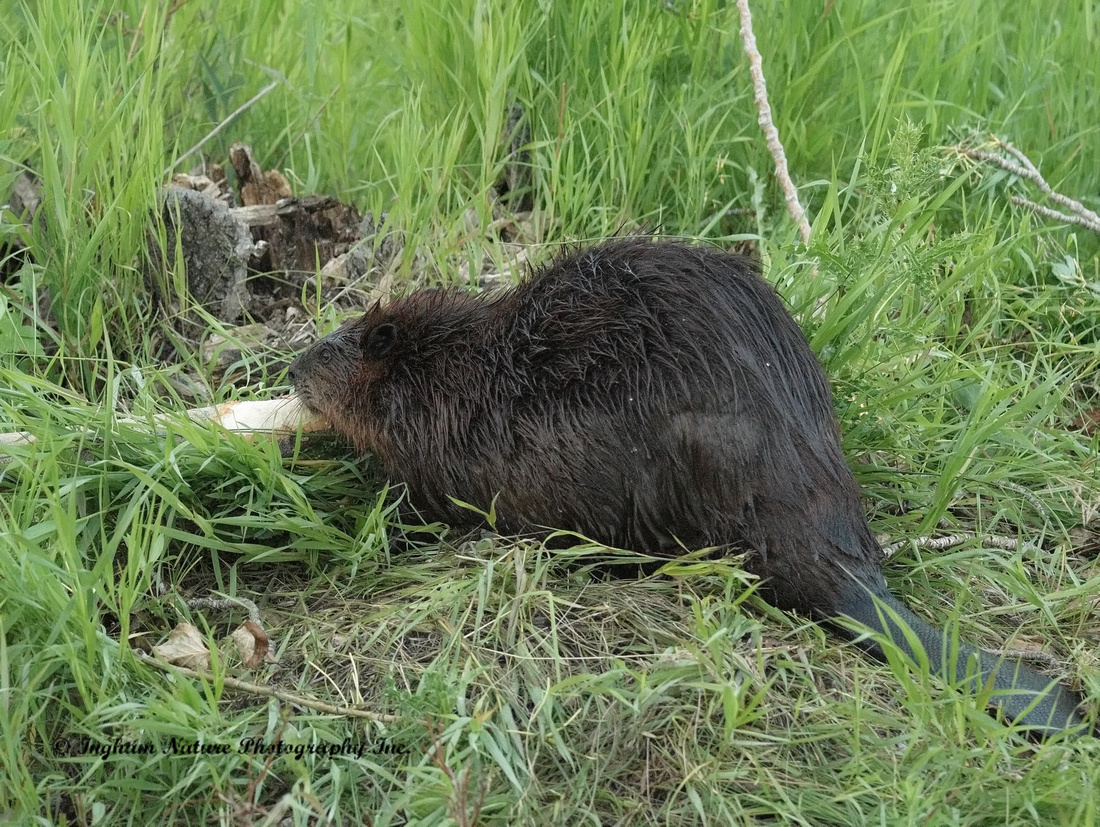 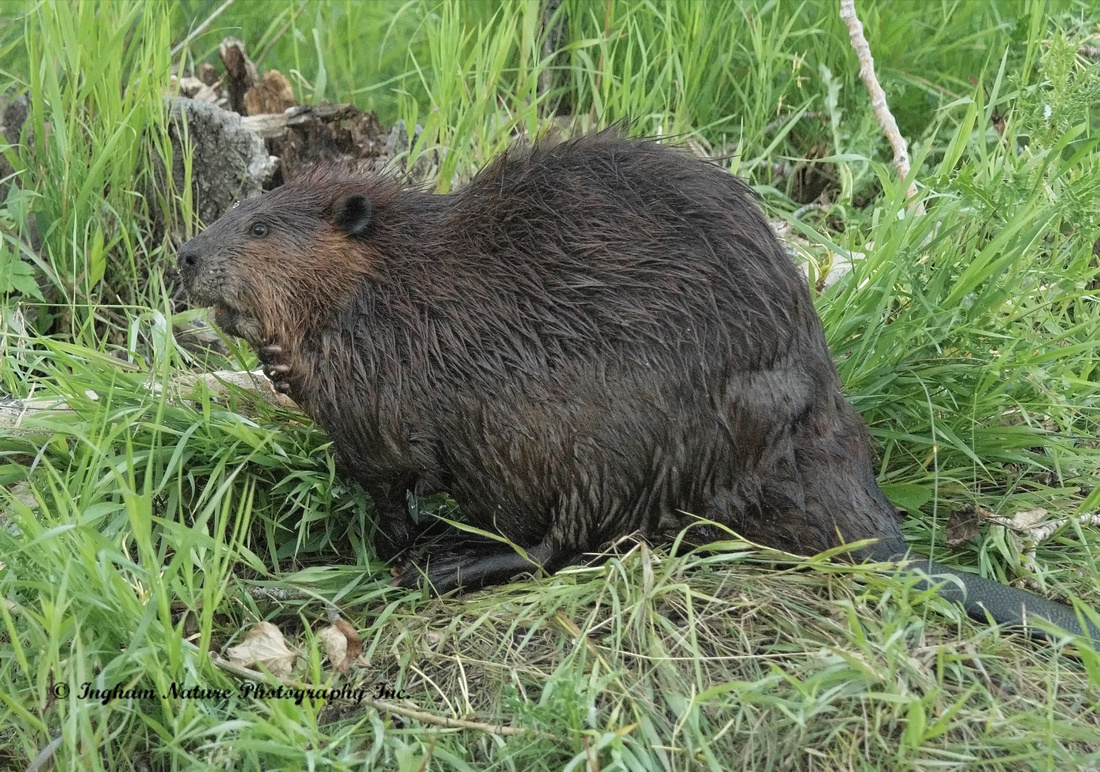