"NOT JUST ANY WALK IN THE PARK" - Porcupine (North American)

"NOT JUST ANY WALK IN THE PARK"

This porcupine session began at 10:30 a.m. in the morning & I left for the day at approximately 4:30 p.m. I did take two brief walking tours around the area in the morning and the afternoon, leaving this fellow asleep (hopefully) in the sunshine and returned to my rather comfortable partially open fallen tree trunk each time. You just have to love Nature's furniture, luckily in this instance in a great viewing spot, with close proximity to the tree where the porcupine was lying.

As the afternoon wore on, the wind picked up with strong gusts and the clouds rolled in. It was at this point our quilled rodent decided to make his way down the tree. He had already partially climbed down previously, taking a position in the "V" of the tree to hang out and sample some of the new buds (another blog to come) & climbed back up, but this time it was the full descent.

I took a position to the north side of the tree and watched the porcupine, as it approached the first tree ledge. I had checked the area previously for any oncoming people traffic but as the weather had turned nasty, there was no one about. Now as he got closer to the bottom of the trunk, to the east I could see a young couple approaching with a Border Collie on a lead.

I stood away from the tree and made a hand signal to stop. Now this may be a surprise to some, but not everyone heeds a "stop sign". Some individuals who see an individual with a camera just carry on with an attitude. Fortunately, this time, the young couple who thought I was trying to photograph a bird, stopped some distance away. It shortly became evident to them there was a rather large porcupine trying to make his way down the tree. And it was a little tricky, because the wind gusts were not only blowing his quills around, but probably pushing on his body as well.

Then he made the final step onto terra firma and off he went, first parallel to me crossing the gravel trail and heading towards the tall grasses. I don't know whether he heard the clicking sound of the shutter or perhaps had got a sniff of me (but the wind was in the direction where it didn't carry my scent) but he suddenly turned and headed straight down the path towards the couple & their dog.

With some quick thinking, the young fellow scooped up the collie and the two stepped back off the trail. This time, our prickly friend must have caught their scent (most likely the dog's) did an immediate about face and headed back south into the tall grasses, where he, of course, disappeared and hopefully made it back safely to the grove of trees, with fallen logs, etc. to take refuge from the weather in its den.

So porcupines wherever you are, I am always willing to watch your back as you make that descent to the ground and act as, the British call them, your "lollypop lady", a woman who stands at crossings & holds up a stop sign to help, in this instance, porcupines cross the trails safely. 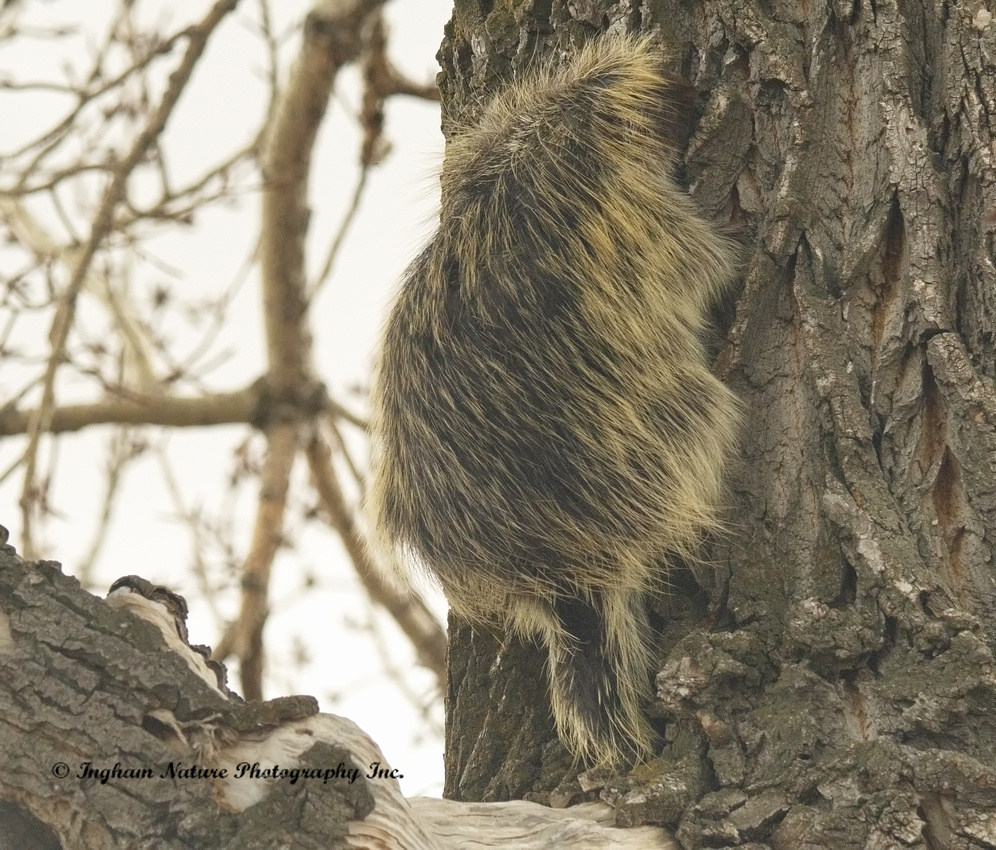 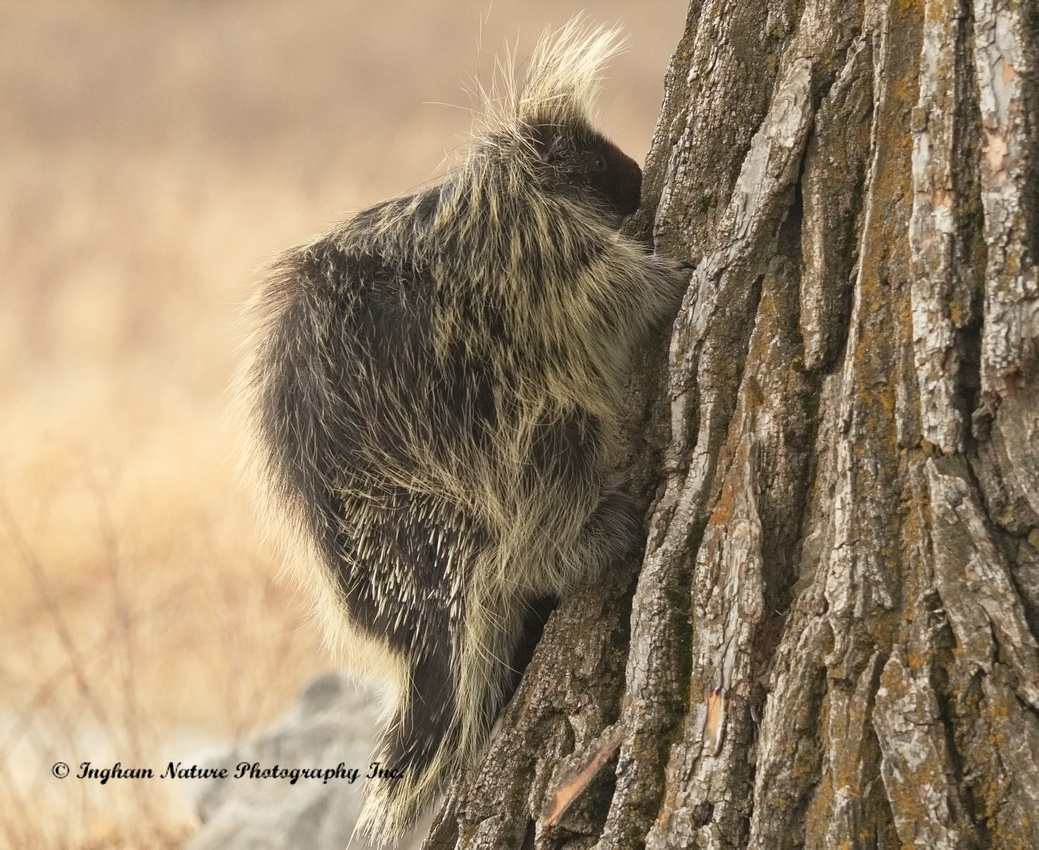 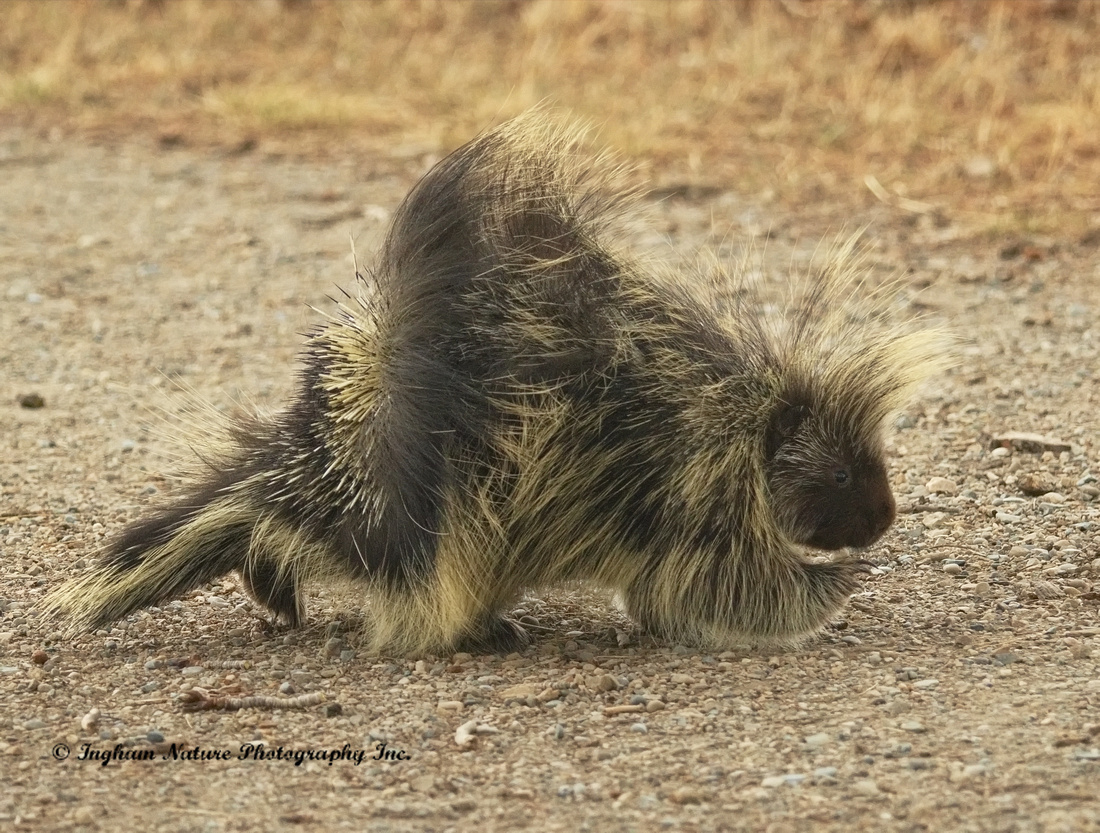 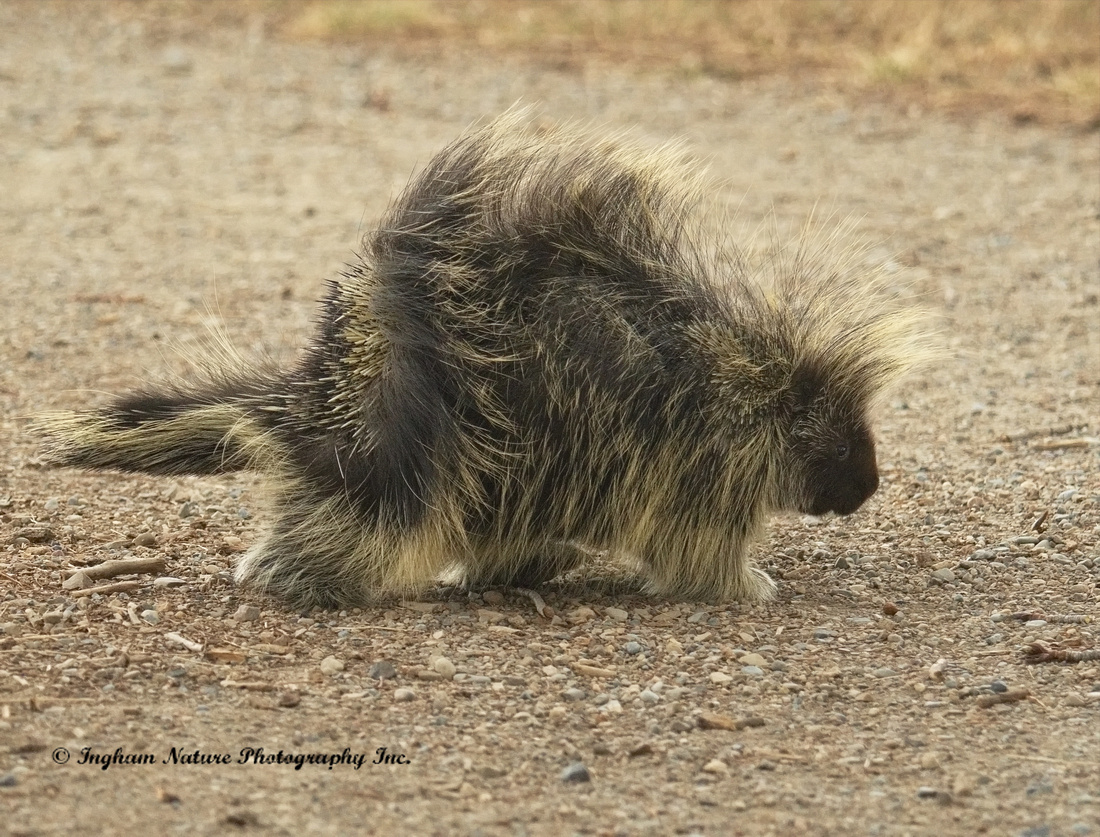 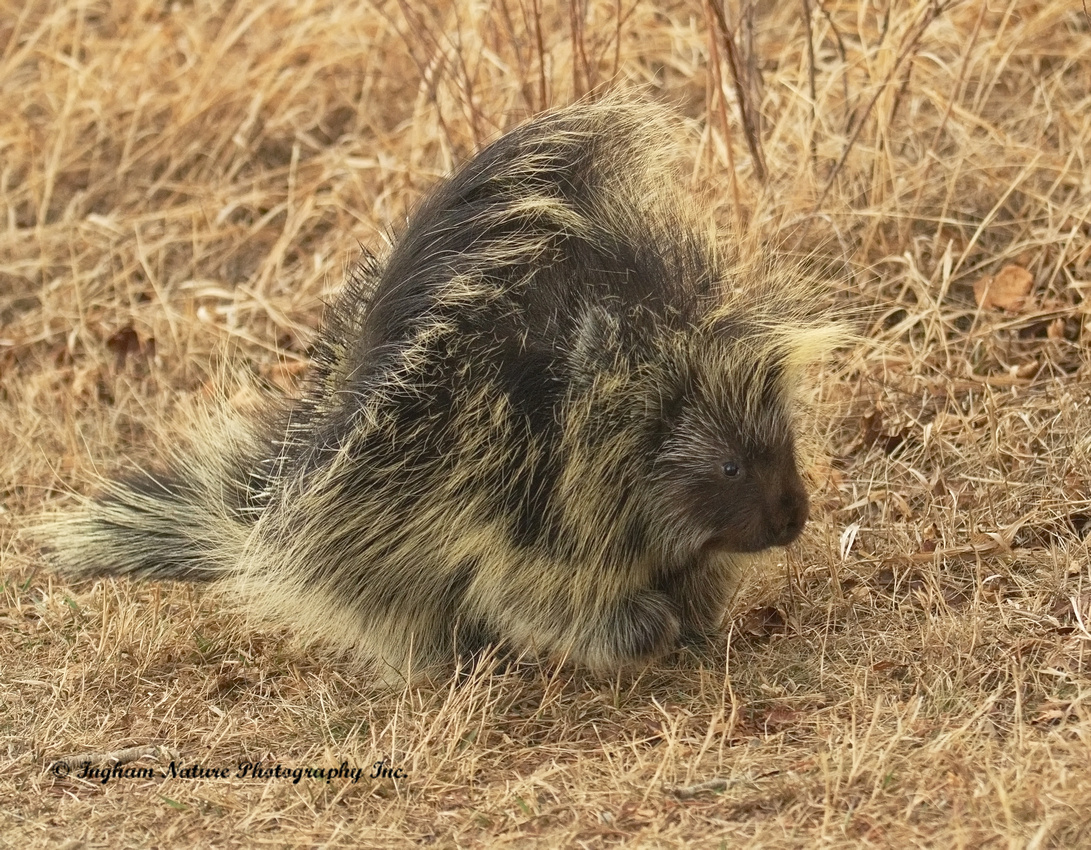 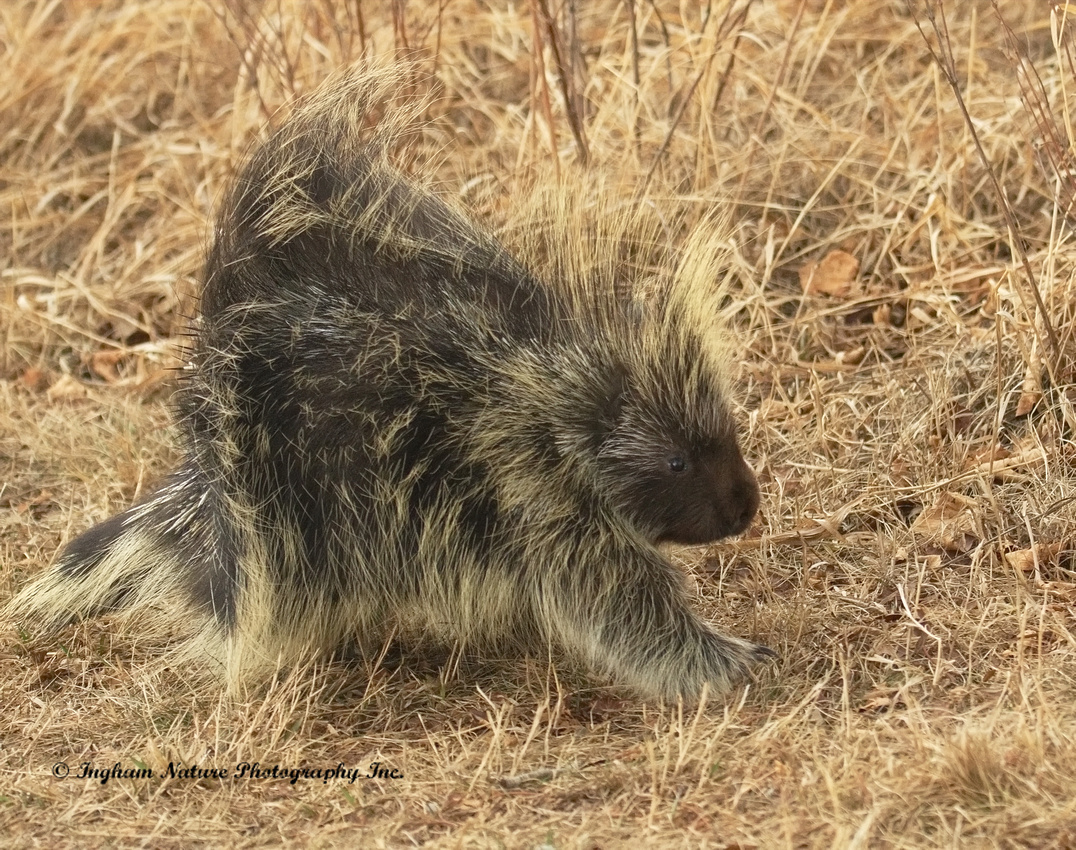 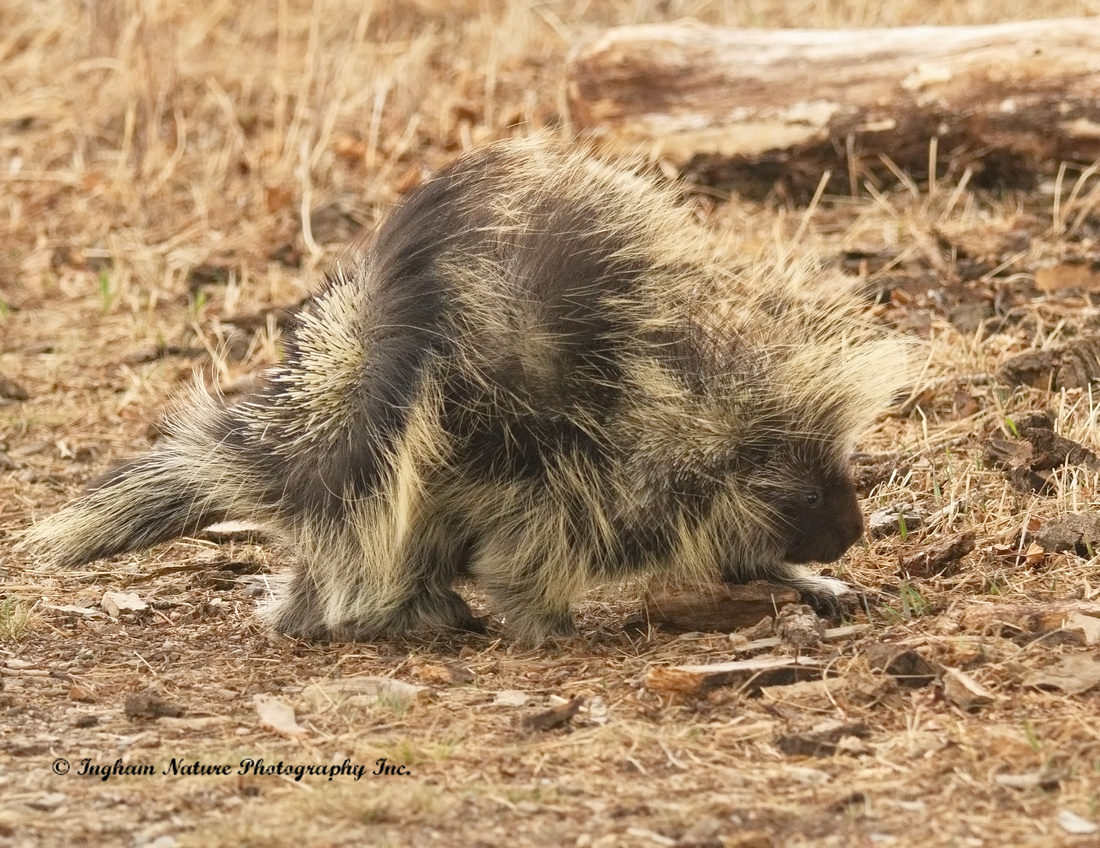 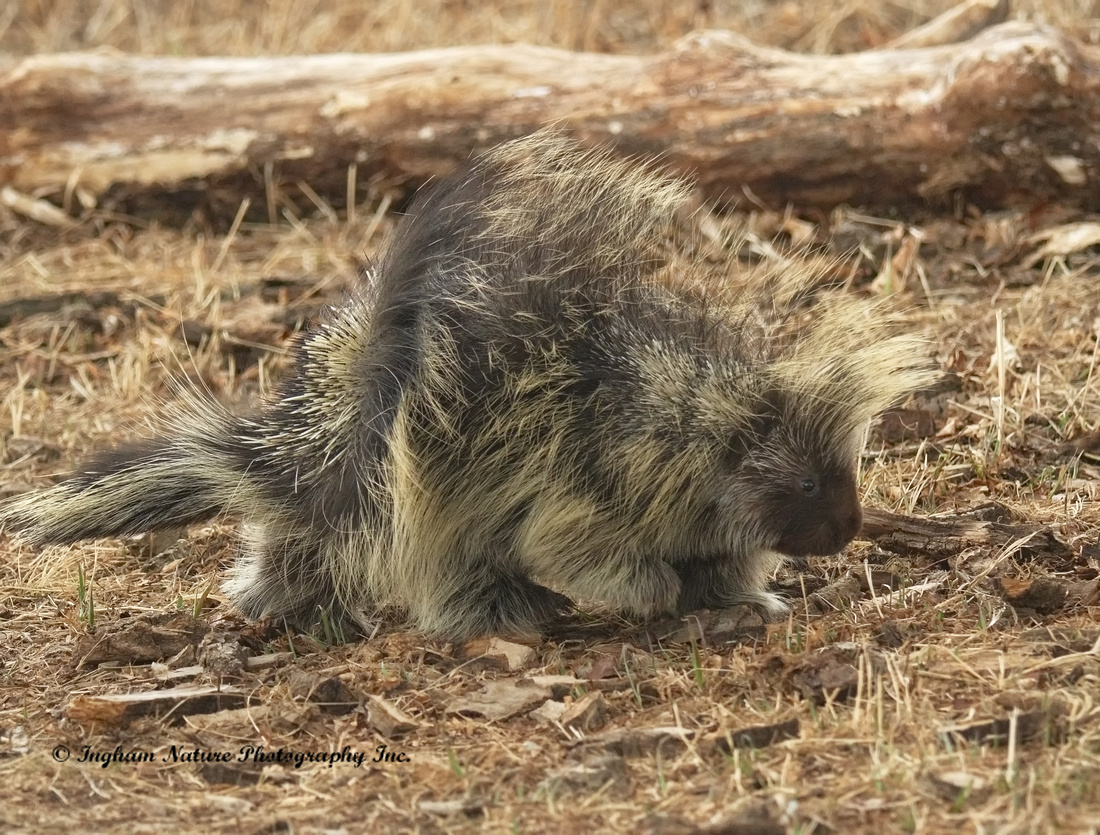 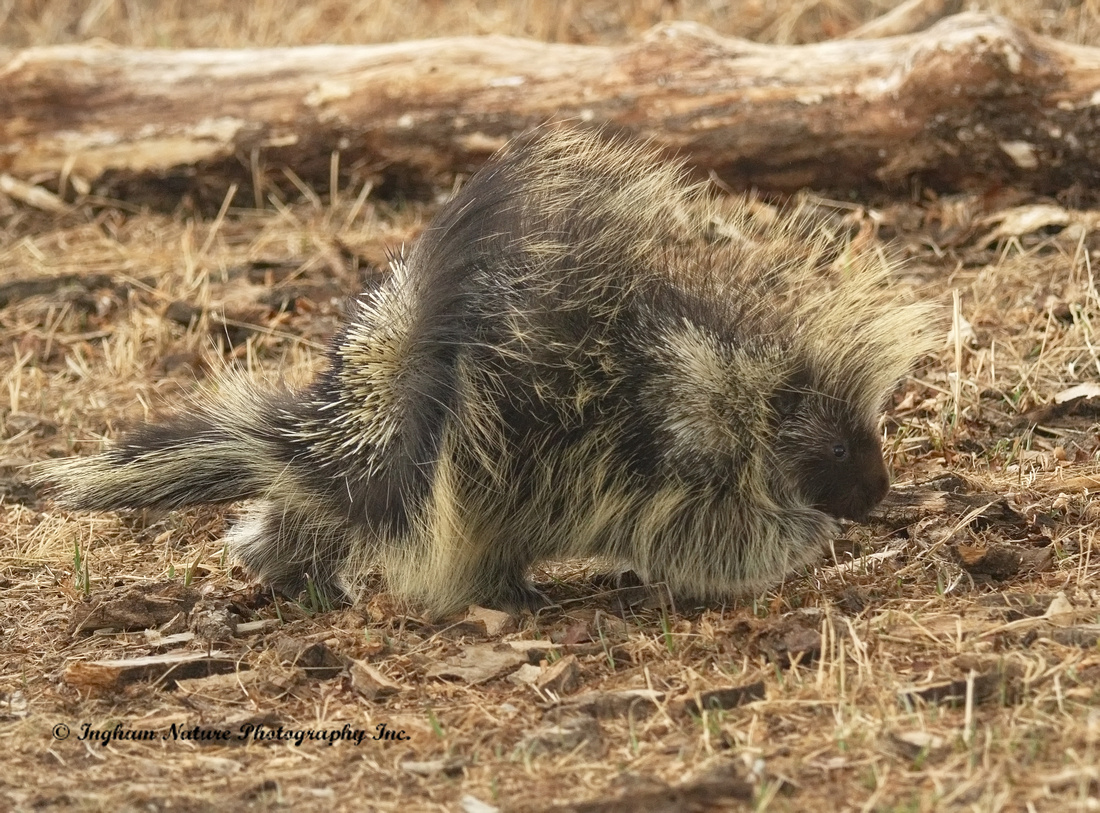 PHOTO #10 - And this is what a porcupine looks like before it completely disappears. The "pointy end" is always the business end! :) 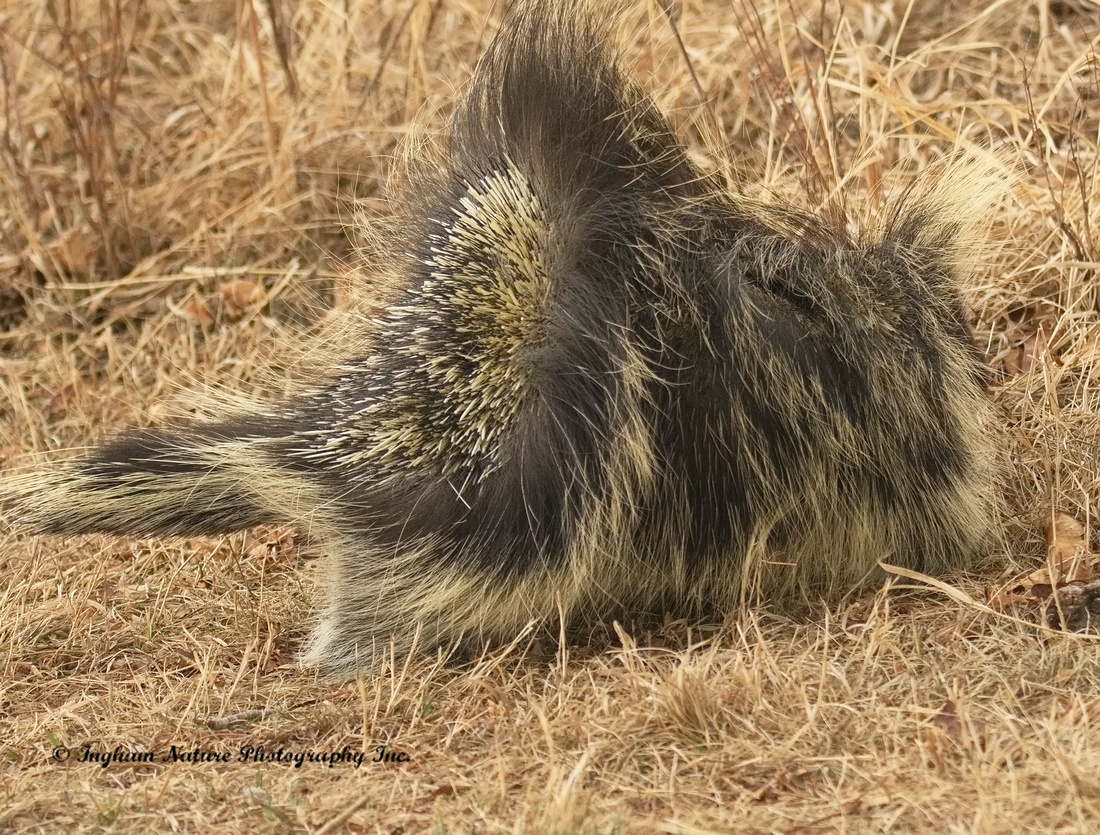 John Harper(non-registered)
These are great, I love the wind blown look. The grass and porcupine blend so well in colour! Your patience pays off, again!
Urszula(non-registered)
Oh wow, super series of photos.The porcupine looks fantastic walking in the grasses. You've captured his/her beauty really well. And that show of the quills in the back!
I think it is the new baby porcupine. Looks smaller than the female we've seen, although there is nothing to compare it to.
A very interesting story with the couple. It is nice to encounter smart people. So many times I've had a misfortune to encounter self-important people who don't care about animals.
Have a happy Easter, Susan!
No comments posted.
Loading...
Subscribe
RSS
Recent Posts
"CELEBRATION OF THE BIRDS" - Birds (North American) "DO PORCUPINES ONLY SLEEP DURING THE DAY?" - Porcupine (North American) "EACH ONE DESERVES RESPECT & PROTECTION" - Great Horned Owls "LATE TO THE PARTY - PARTY ANIMAL" - Weasel (Long Tailed) "WHAT ARE THOSE OSPREYS DOING NOW?" - Ospreys "LATE TO THE PARTY" - Weasel (Long Tailed) "BLACKBIRD SINGING ..... " - Blackbirds (Red Winged & Yellow Headed) "SPIDERMAN, SPIDERMAN - DOES WHATEVER A ..." - Porcupine (North American) "THE AW FACTOR" - Porcupine (North American) "THE DEMONIC MINK" - Mink (North American)
Keywords
Archive
January February March April May June July August September October November December
© Ingham Nature Photography Inc.
Powered by ZENFOLIO User Agreement
Cancel
Continue