The photos below are of a pair of Bald Eagles who are permanent residents of Calgary, AB. They have a nest on an island in the middle of the Bow River and frequent the river's shores regularly.

The male of the pair appeared in the January 2nd, 2023 blog, "When An Eagle & A Magpie Play Chicken" and unfortunately was "defeated" by the magpie, i.e. gave up his perch.

Mid-morning, again the male eagle flew into the same tree and took up the same perch, with the identical positioning as previously (Photo #1). So there I was madly shooting, when out of the corner of my eye, I spotted a second & much larger eagle coming in for a landing. The male had to move over to allow sufficient room for its mate, who landed in all her magnificence (Photo #2 & Photo #3).

The female, however, had taken her perch in exactly the opposite direction to her mate. So there they were side by side but facing different ways. (Male is to the left of the photo, female to the right.)

Soon these two eagles will be re-affirming their commitment to each other, which can include chattering to each other with heads lifted up. But in the interim, what better way to show love but to watch either other's back. Magpies beware, there will be no sneaking behind and tweaking tail feathers with these formidable two, standing side by side.

And even Bald Eagles can sometimes look silly as they try to establish positioning on a branch (Photo # 6). 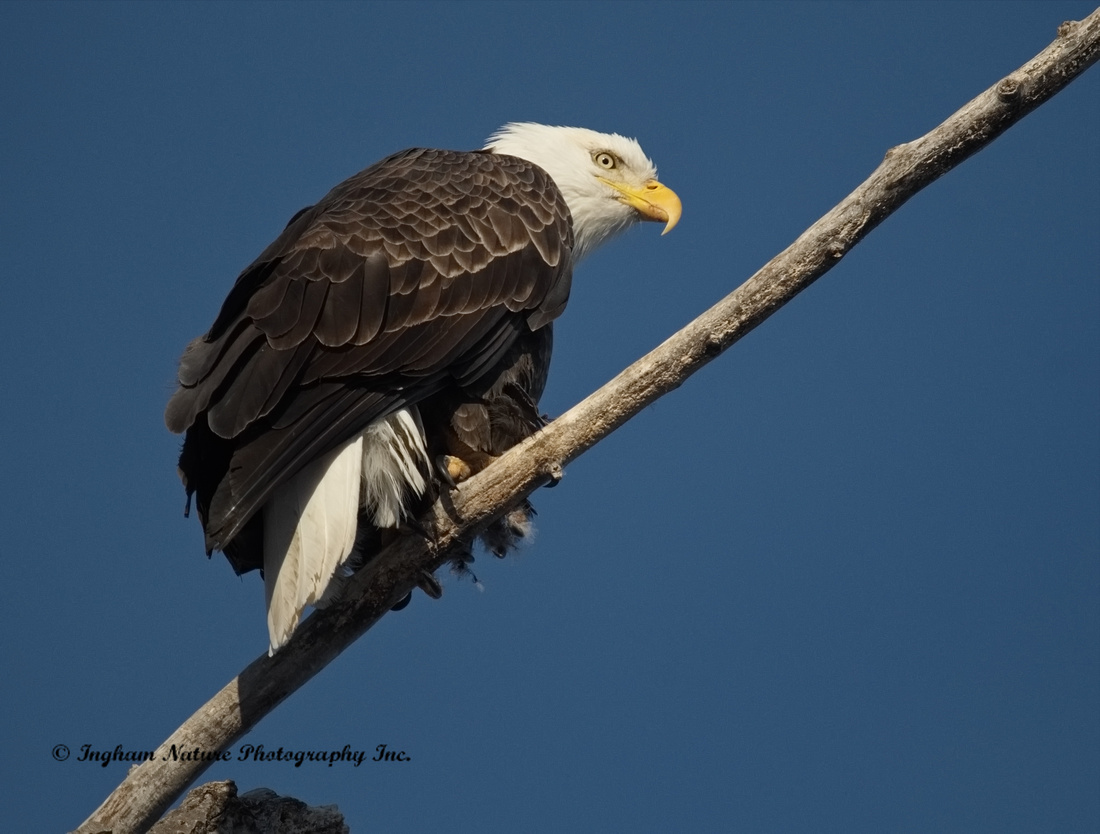 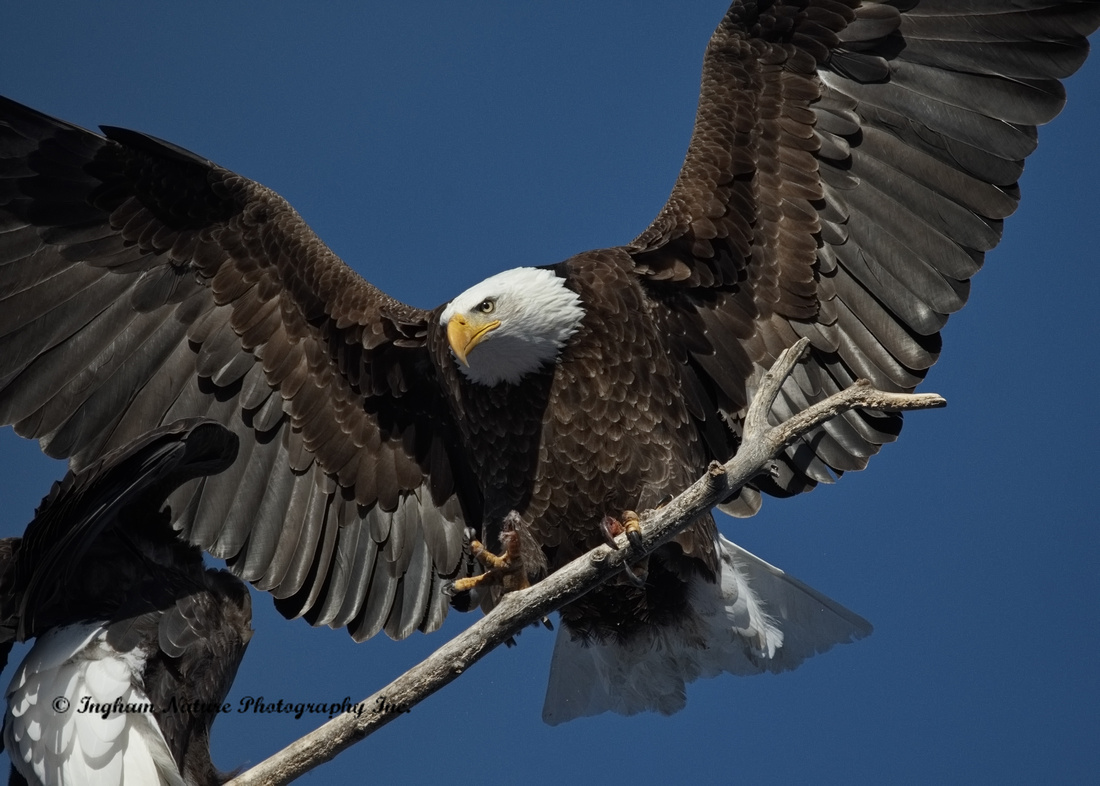 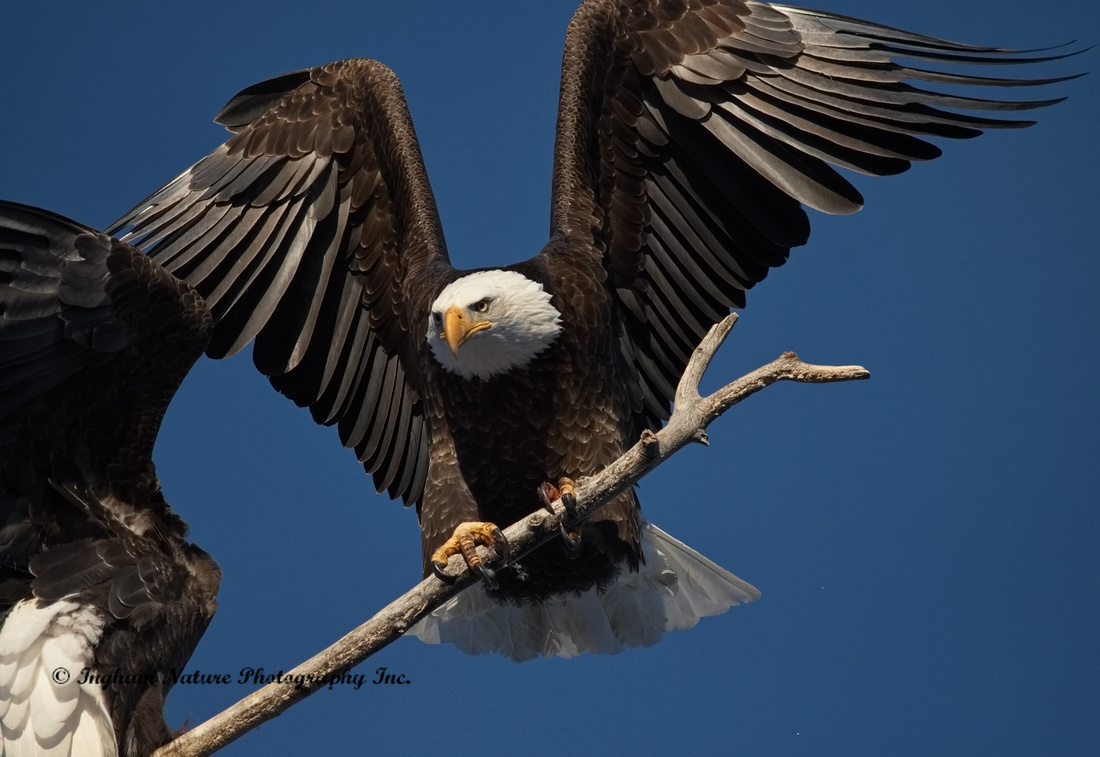 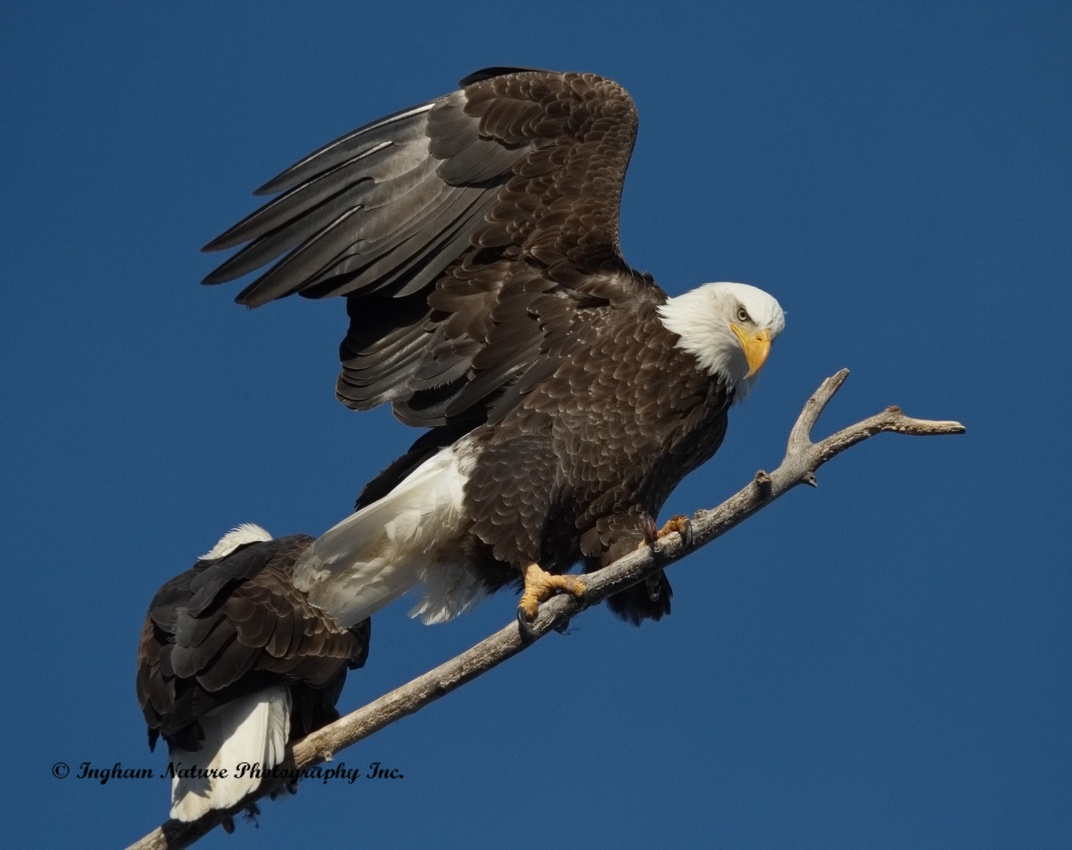 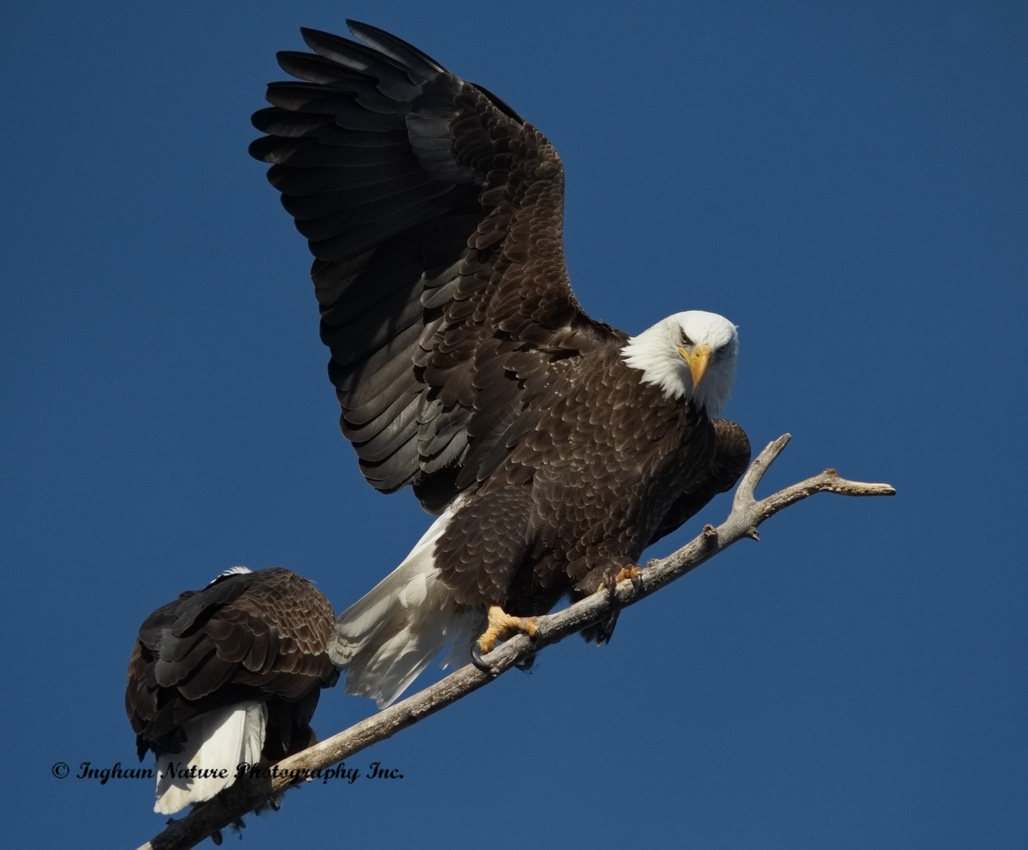 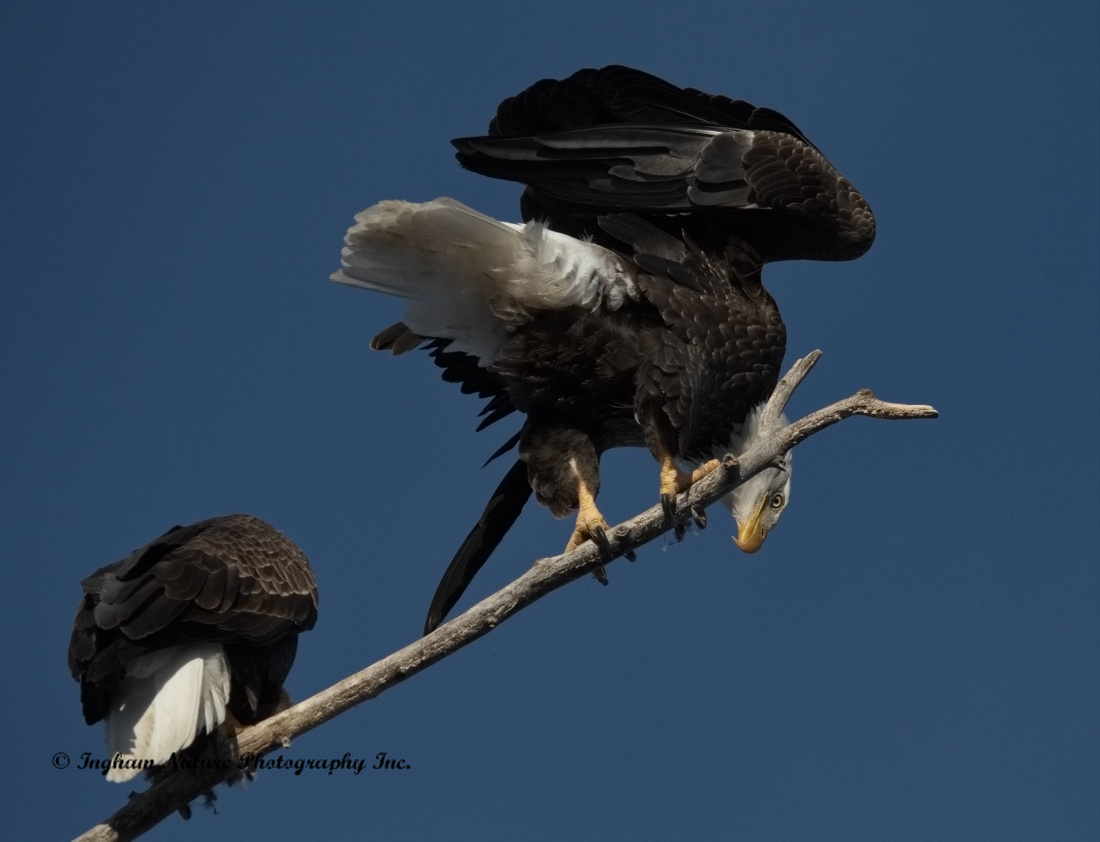 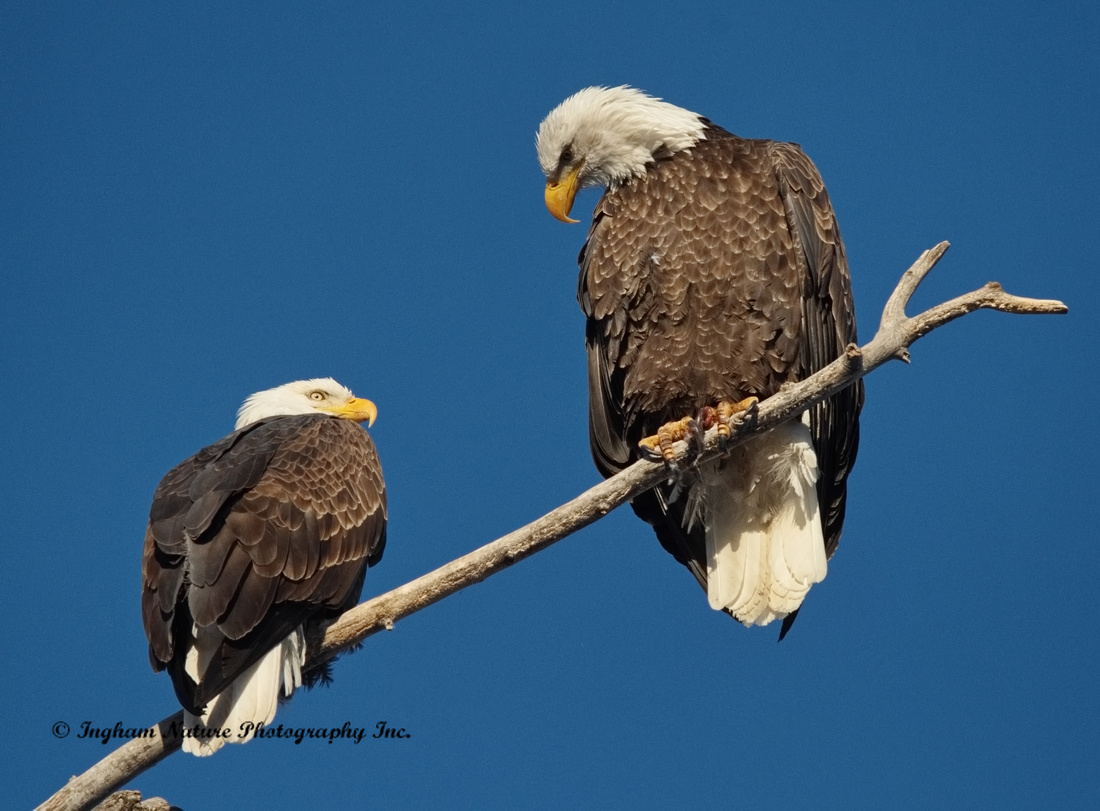 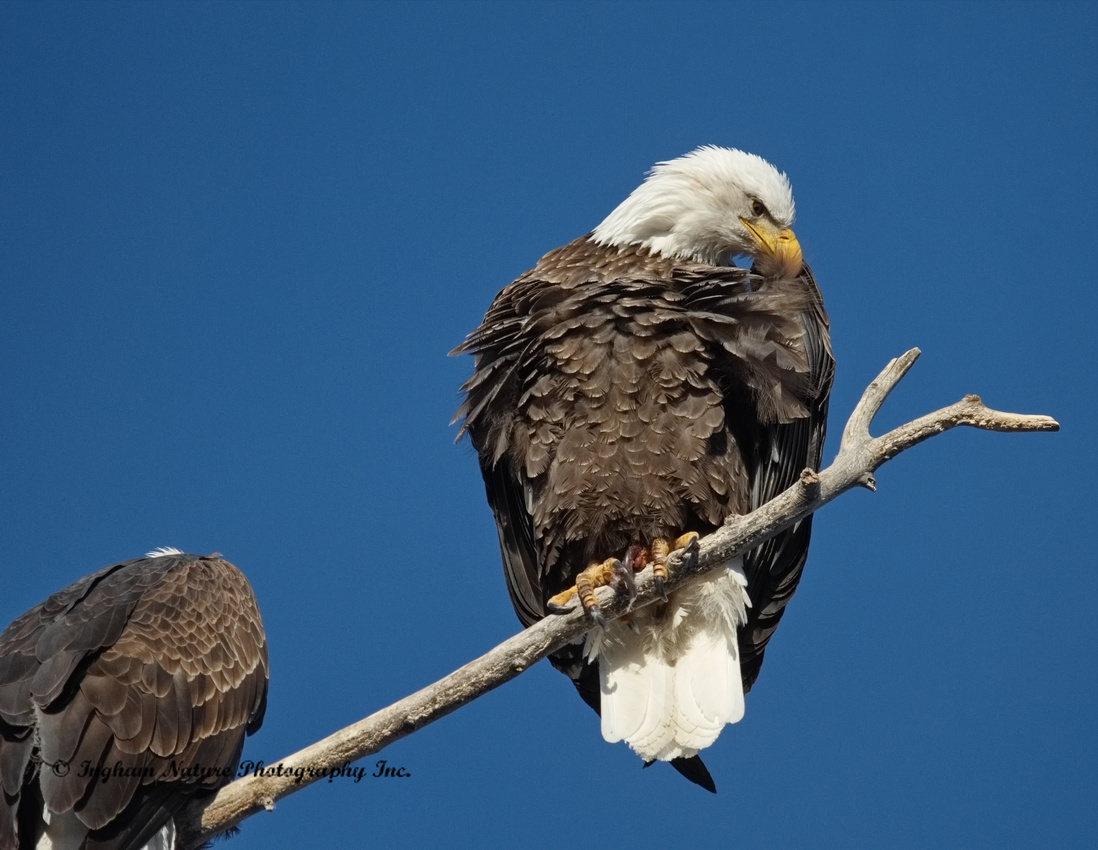 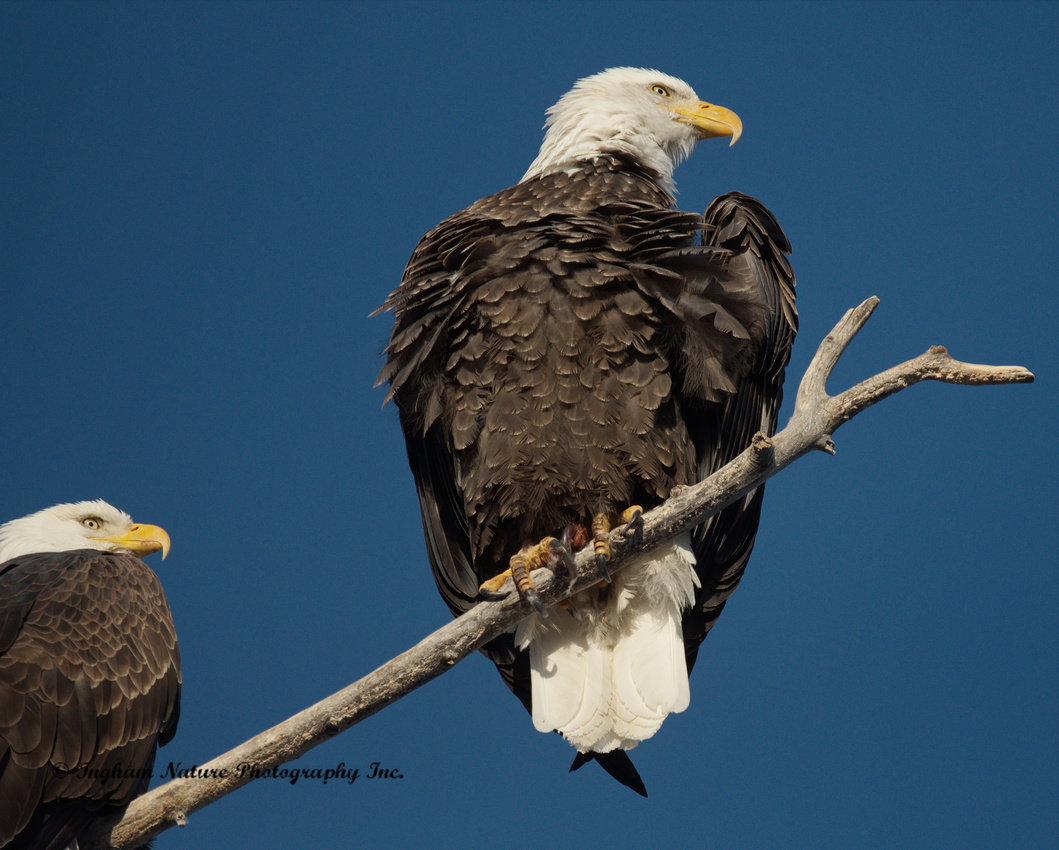 Urszula(non-registered)
It was magnificence, beautiful show of those amazing wings. You've done them justice!
On Monday I saw an eagle on the island you've mentioned. Later at home I saw another one in the nest close to the first eagle.
I wish I've had a longer zoom... What a confidence that we spotted it this year. Good omen :)
No comments posted.
Loading...
Subscribe
RSS
Recent Posts
"MAGPIE - THE OTHER WHITE MEAT" - Weasel (Long-Tailed) "NUM, NUM, NUM!" - White-Tailed Deer "THE NOT SO COMMON - COMMON GOLDENEYE" - Common Goldeneye "EVERYONE MUST HAVE THOSE DAYS WHEN YOU FEEL BLUE" - Belted Kingfisher "WHAT EAGLES GET UP TO IN THEIR DOWNTIME" - Bald Eagles (Mature) "GUESS WHO JUST DROPPED IN?" - Sharp-Shinned Hawk "CROUCHING EAGLE" - Bald Eagle (Mature) "CUDDLE BUG" - Porcupine (North American) "LIGHTNING BUG" - Belted Kingfisher "NINJA WARRIOR VS SUMO WRESTLER" - Squirrels (Red & Eastern Gray)
Keywords
Archive
January February March April May June July August September October November December
© Ingham Nature Photography Inc.
Powered by ZENFOLIO User Agreement
Cancel
Continue