"EACH ONE DESERVES RESPECT & PROTECTION"

WARNING - Some individuals may find some parts of this blog upsetting.

Having said the above, there is much to rejoice regarding one Great Horned Owl family. The female & male have managed to raise an owlet to fledging status. The owlet is now managing to scale trees with some wing flapping. Within a few weeks, hopefully it will graduate to flight, which will be one more huge step to full independence.

The photos of the female owl were taken on a very windy day prior to the little owlet fledging. The owlet was all cozied up in the tree trunk safe from the elements. As the female owl was sitting sideways to the wind on top of the nest, her feathers blew aside and you can clearly see in Photo #1, the opening for her true ear and eardrum. Photo #2 is a grooming shot, which shows off her beautiful feathers.

The photos of the male owl were taken during the similar time frame. I had been walking along the path & turned to look backwards, when I came face to face with Mr. Owl (Photo #3). Hence that big yellow eye stare. But no worries, got a few shots with the camera and then Mr. Owl went back to his well deserved nap. Photo #4 was taken on a separate day when the male was grooming.

Photos #5, #6 & #7 are of the lovely owlet with its mother. It seems to be a real "Mummy's Owlet", probably suffering from Only Owlet Syndrome" :)!

A friend has a cabin on MacGregor Lake, just southeast of Calgary, Alberta. For the past few years, a pair of Great Horned Owls have nested in fir trees close to his property. This year, for the first time during the Snow Geese migration, dead and sick Snow Geese have been found around the lake. Mammal predators like the coyote have not touched the carcasses. And yes, the cause of the illness is Avian Flu.  Some time during the past weeks, the male owl was found dead on the ground, some distance from the nest.

As there was no movement in the nest for sometime, my friend had the unenviable task of using a ladder to scale the tree. As he got closer to the nest, he could see the female was erect but not moving. She too had passed but still on watch with her wings spread across the three owlets who had also died. Truly truly a sad outcome for five beautiful Great Horned Owls and huge heartbreak for my friend.

Owls do not scavenge but were most likely feeding on small birds that had been infected with the virus by the Snow Geese. Other birds that owls prey upon include small waterfowl. All five owls, of course, had died from Avian Flu.

The tree has now been cleaned and everyone in the area is hoping for the return of a nesting pair of owls in the next year or two.

And this is where the title of this blog comes from. Every owl is precious and even if a pair of owls have only one owlet, we should share in the joy with its parents, but always with respect as with all things wild.

N.B. The Great Horned Owl is the Provincial bird of Alberta 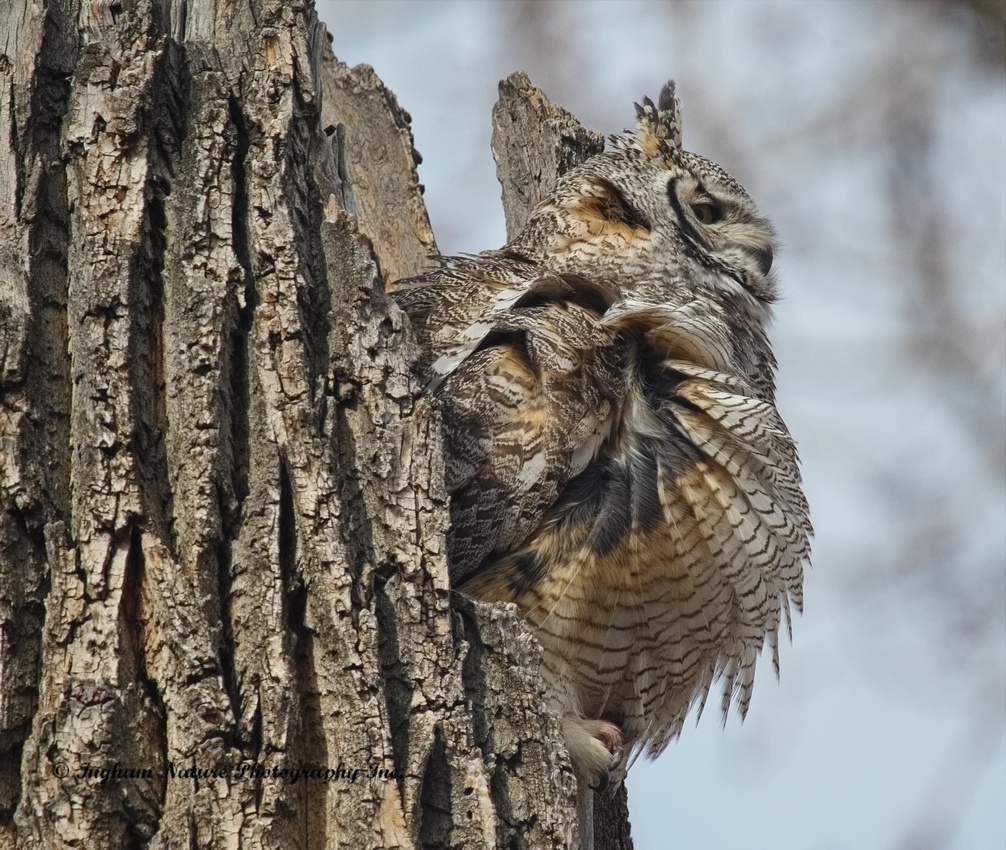 Great Horned Owl - Female"HAVE YOU EVER SEEN THE LOCATION OF AN OWL'S EAR?" 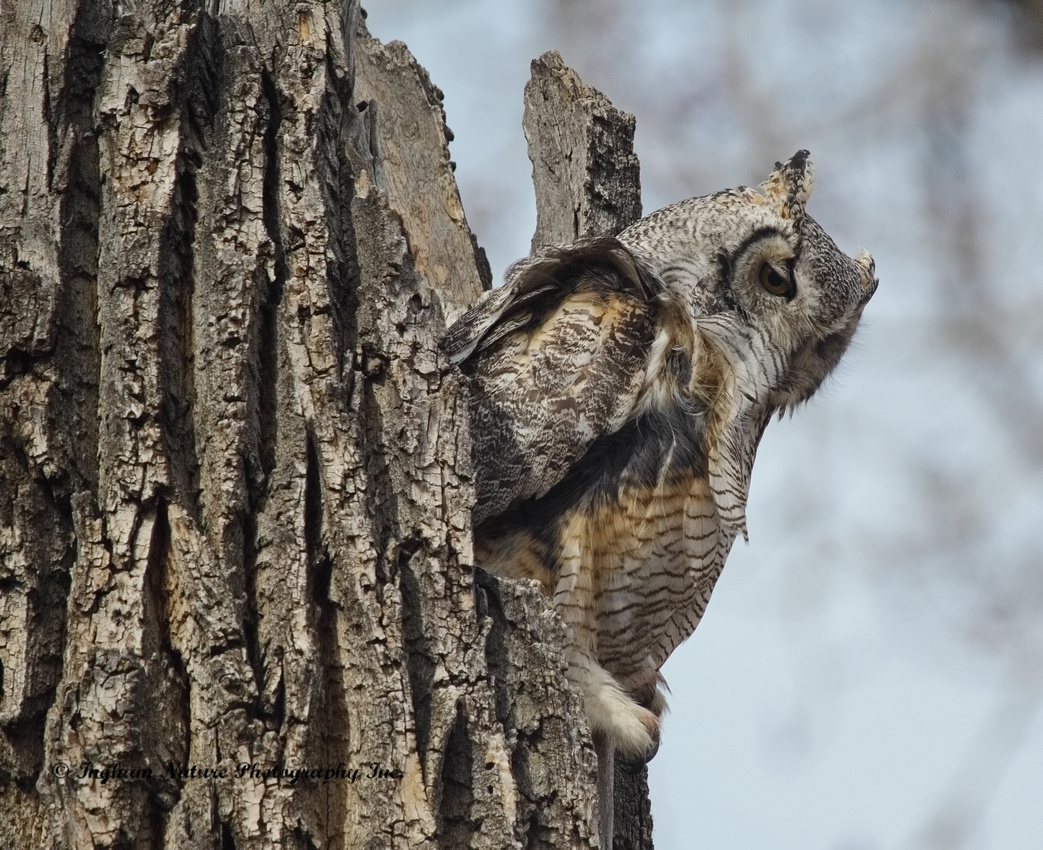 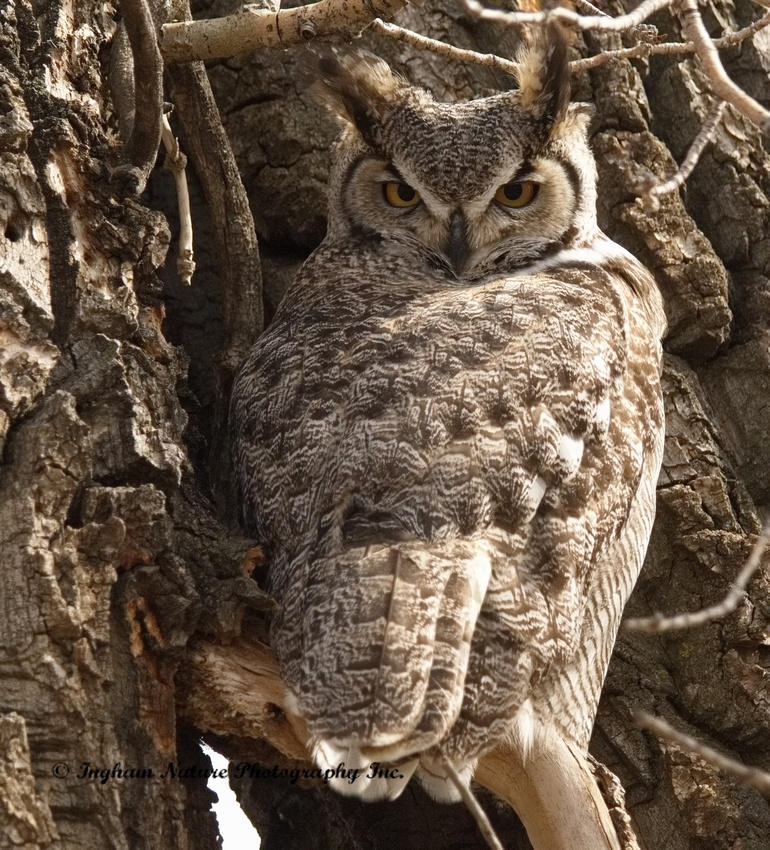 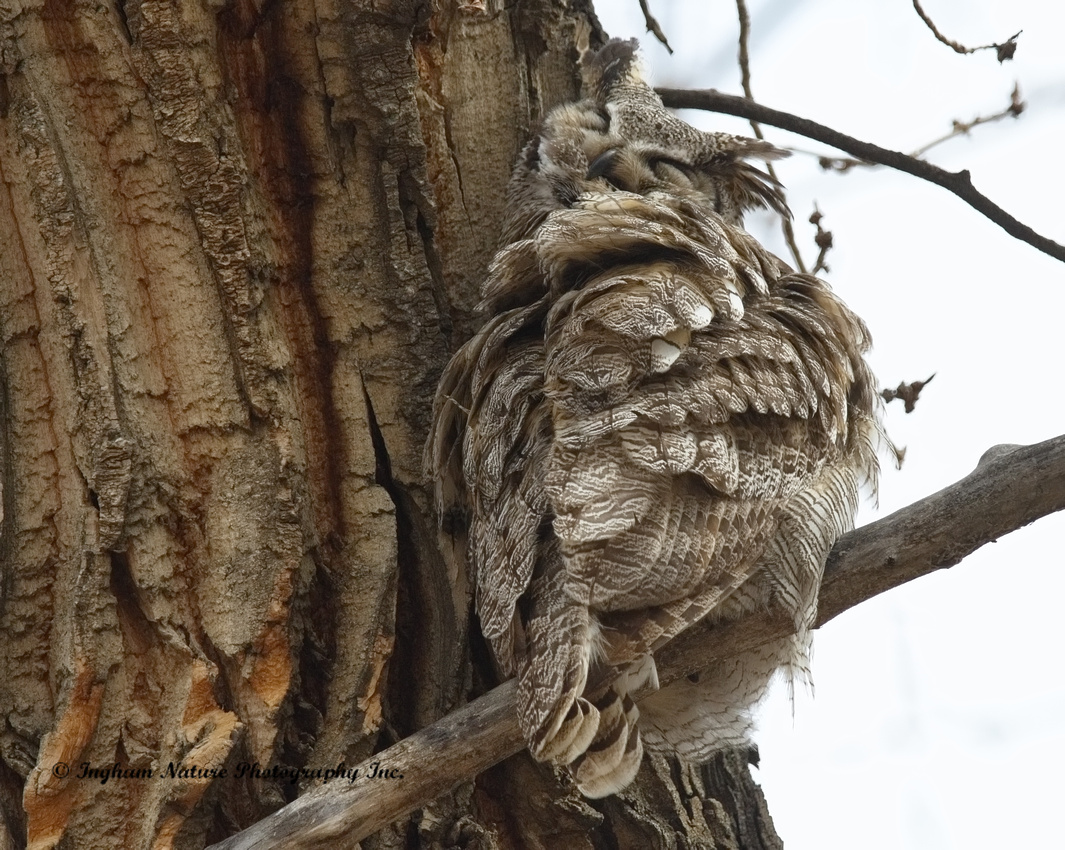 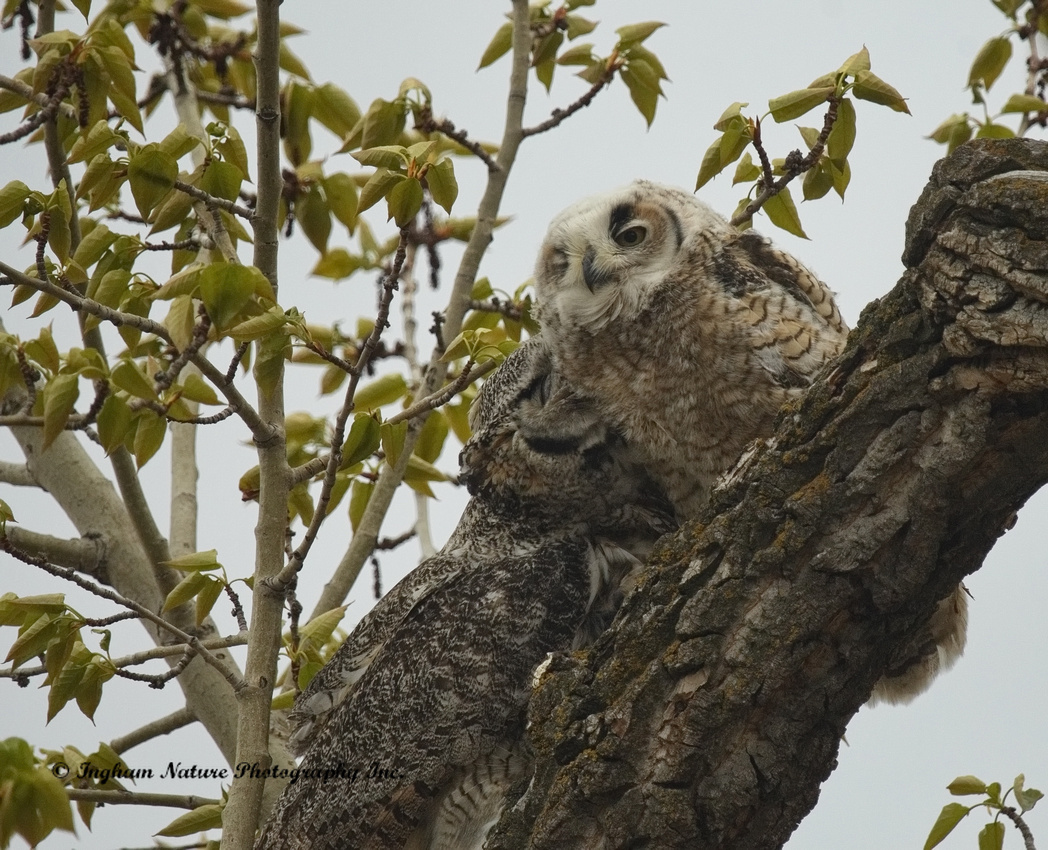 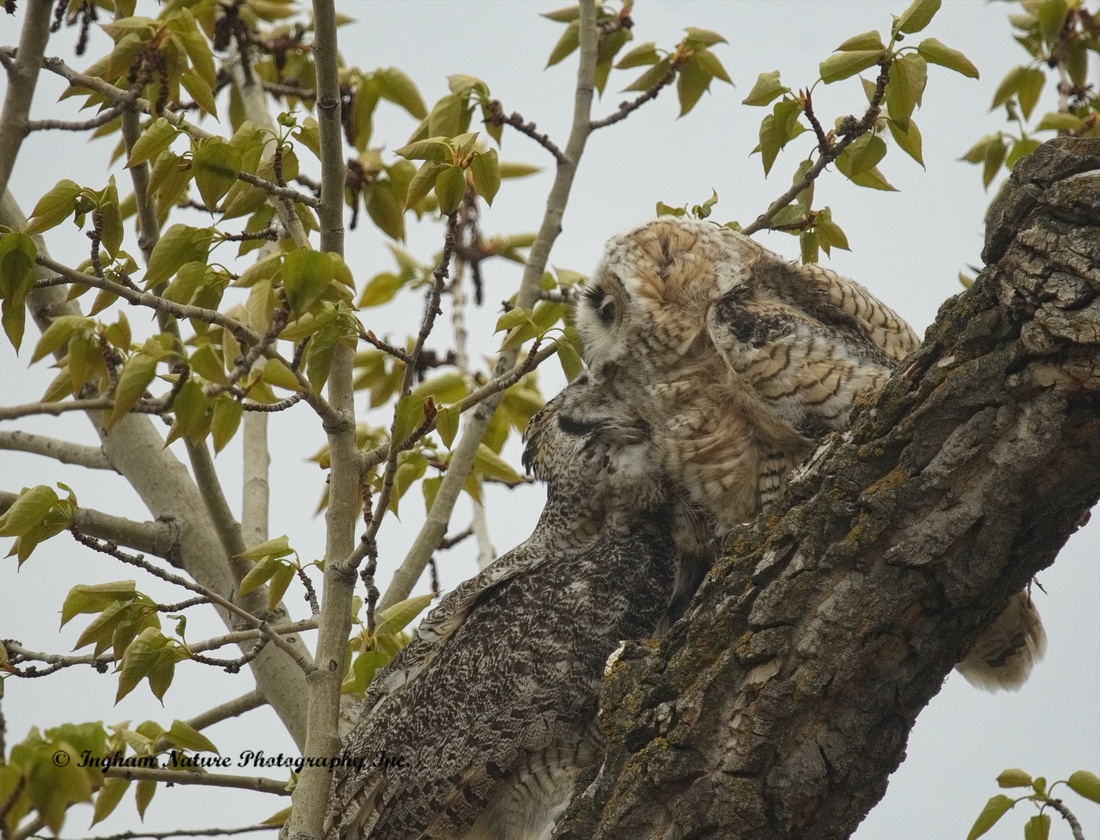 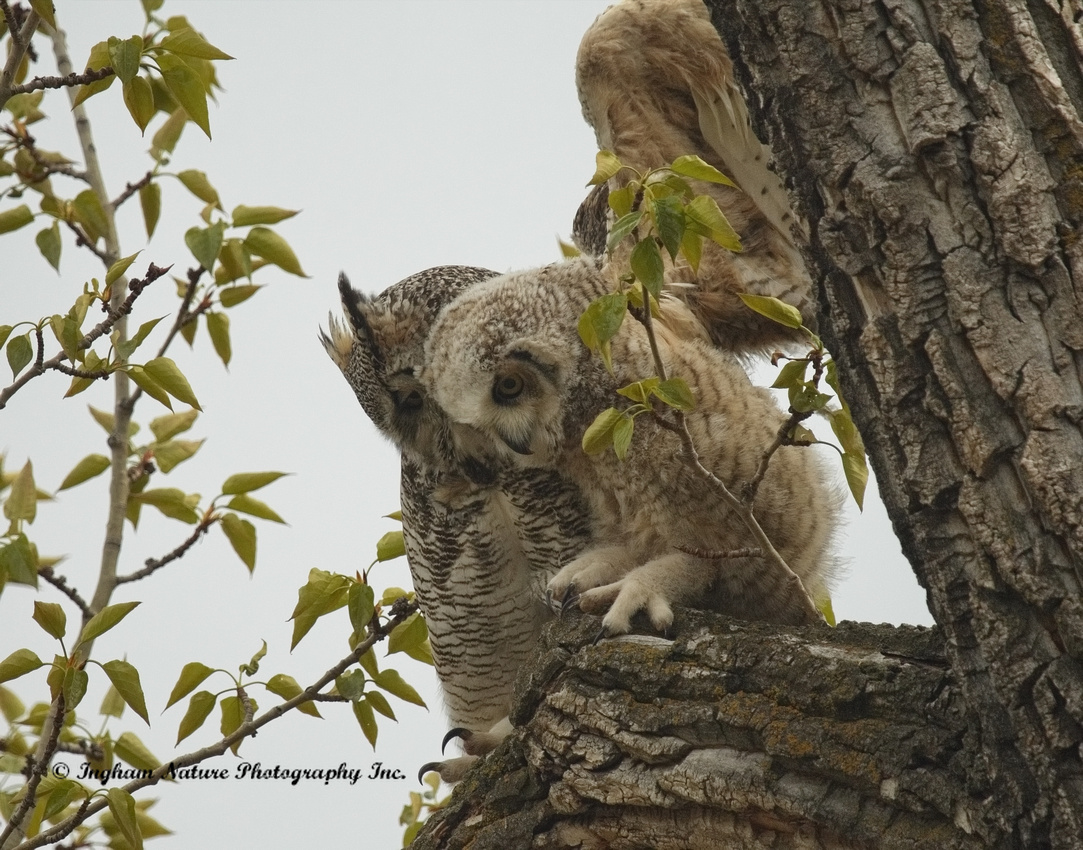