"BEAUTY & THE BEAST (or Revenge of the Rodent)" - A Short Story

The photos that follow were taken over 2 days at the same pond and the blog is more of a short story in three parts. (Pay close attention to Photo #9!)

So here we go.

The Great Blue Heron favoured this pond due to the abundance of fish and other tasty morsels. In fact, the day before it had caught a large fish which it took some time to down. It also liked to stand on a large beaver lodge located to one side of the pond, which allowed me some opportunities to achieve some close ups. Probably a great position for grooming & sunning, as well as always keeping a look-out for food. (PHOTO #1 THROUGH PHOTO #5).

And then for reasons only known to the heron at the time, it began to climb from the lower bottom of the lodge to the very top. It then reached across the top of structure and grabbed something. I knew it couldn't be a fish because the top of the lodge is almost 3 feet out of the water.

My first thought was a vole but when I finally could see it, in its entirety, between the rushes, I thought it was a muskrat. No not an adult but a baby.  However, I have subsequently have had some valuable input from two well versed naturalists and it is a species of Jumping Mouse, an unusual sighting, even if it unfortunately now deceased :(  Am still trying to determine whether it is a Meadow Jumping Mouse or a Western Jumping Mouse. The Meadow Jumping Mouse prefers moist fields but can be found in marshes & the Western Jumping Mouse prefers areas near streams, etc. And it took a lot of water dunking before the heron could successfully swallow the creature. (PHOTO #6 THROUGH PHOTO #8).

And that brings us up to PHOTO #9, a very important key to the happenings on Day 2.

So back to the pond to see if the heron returned. After almost an hour, it flew in to the west side of the pond and then slowly walked across to the east side, where it commenced fishing along the shore.

Then out from the side of the beaver lodge, closest to me me, swam a large muskrat. Uh-oh!

It swam towards the heron at which point the heron jumped up and over and then flew to the other side of the pond. (PHOTO #10). "Curious", I thought, "Not taking advantage of an easy meal?"

The heron began creeping along the west shore, looking for fish when all of a sudden it did something I have never seen a heron do before. It began to walk quickly backwards rapidly in retreat (PHOTO #11). And then all became clear, just in front of the heron, was the adult muskrat. As the muskrat swam towards the heron, the heron kept backing up and you can see from its head feathers, the heron was alert & concerned (PHOTO #12 THROUGH PHOTO #14).

I can only imagine a conversation between the muskrat and the heron.

"You're the guilty party. I finally found you. You've been eating rodents near my lodging and my family is not going to be next! You are not welcome in this pond. Don't let the rushes hit you on the butt on your way out!"

And then the heron flew off to another area (PHOTO #15). On previous occasions, the heron has quickly returned but in this instance, no sign of the heron. And the muskrat had also disappeared, no doubt somewhat abated by finding the culprit & sending it packing. 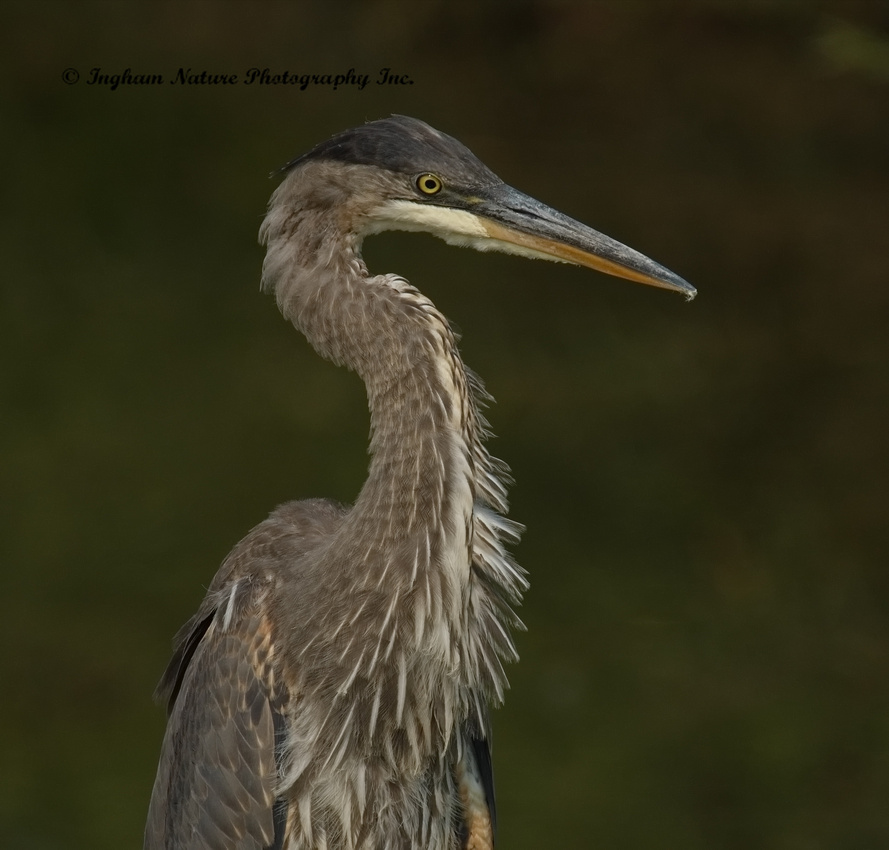 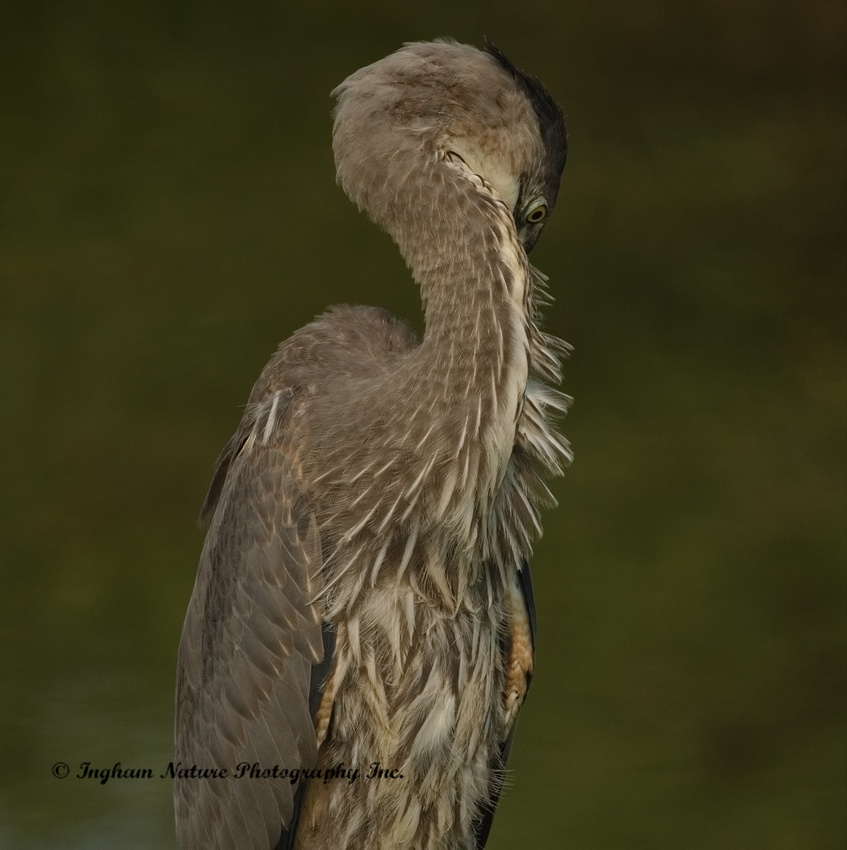 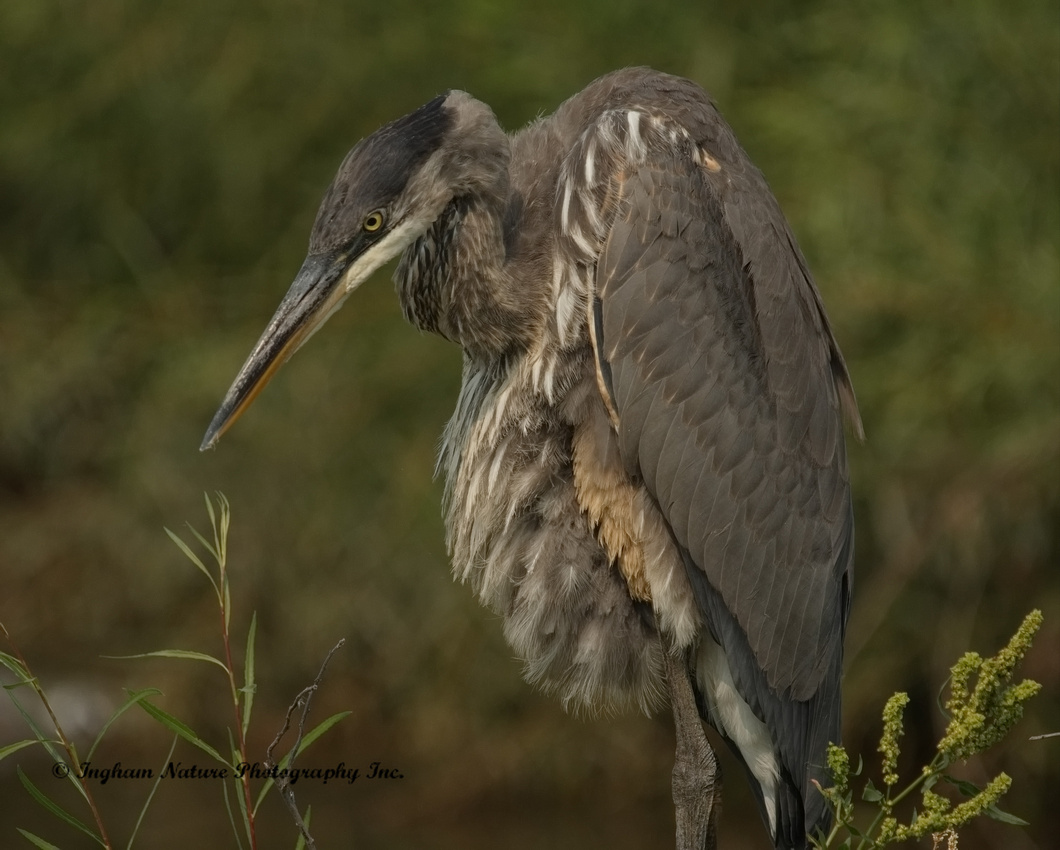 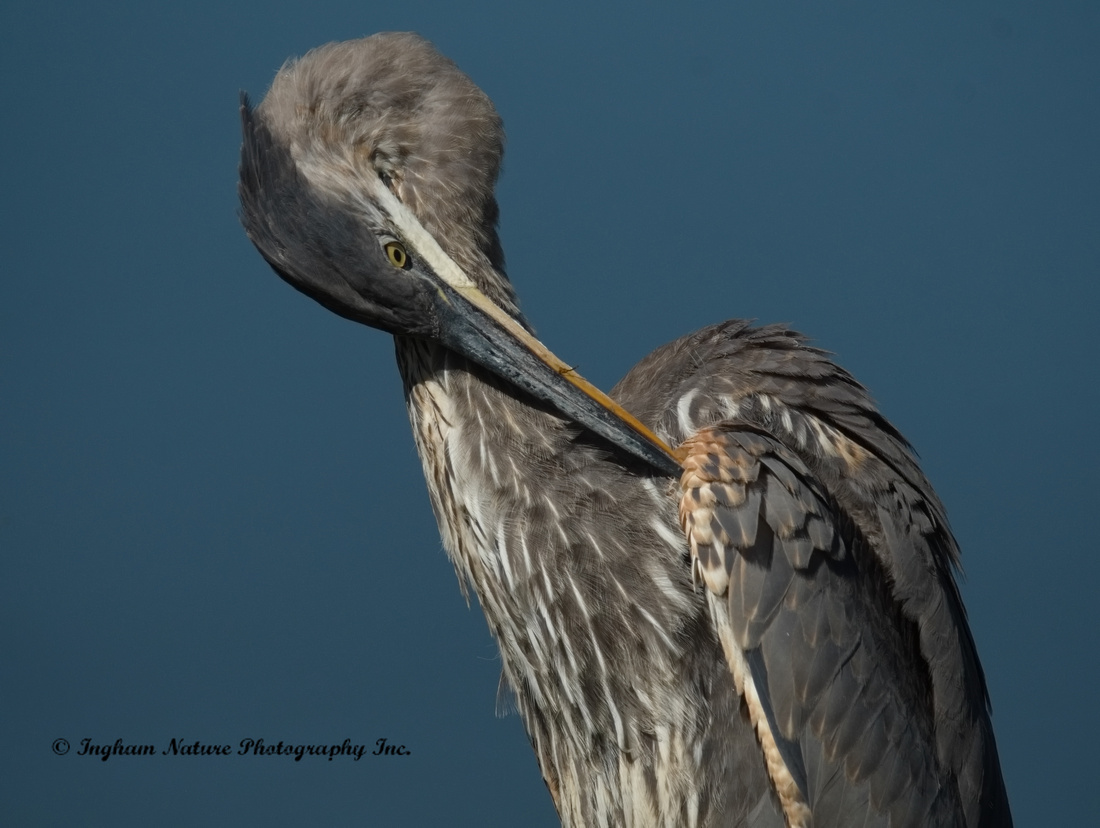 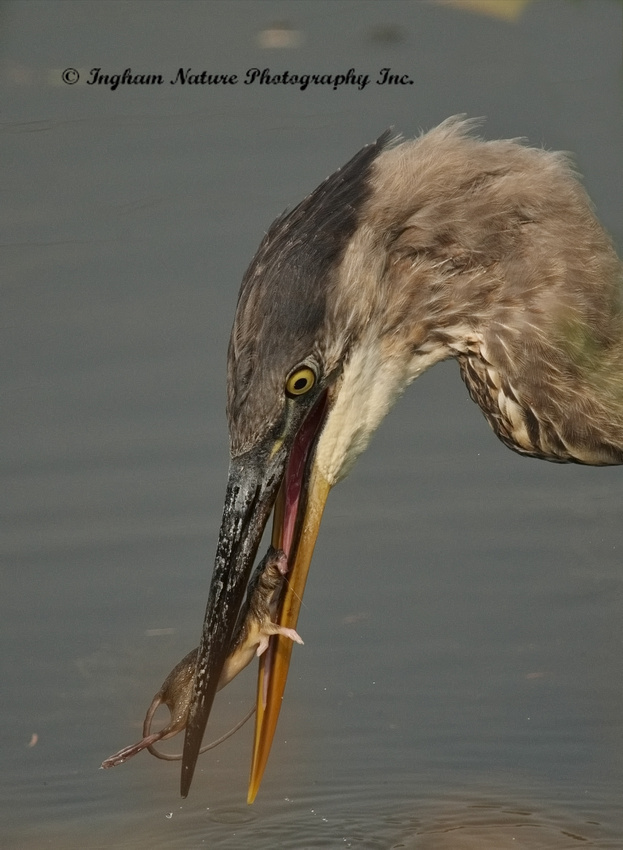 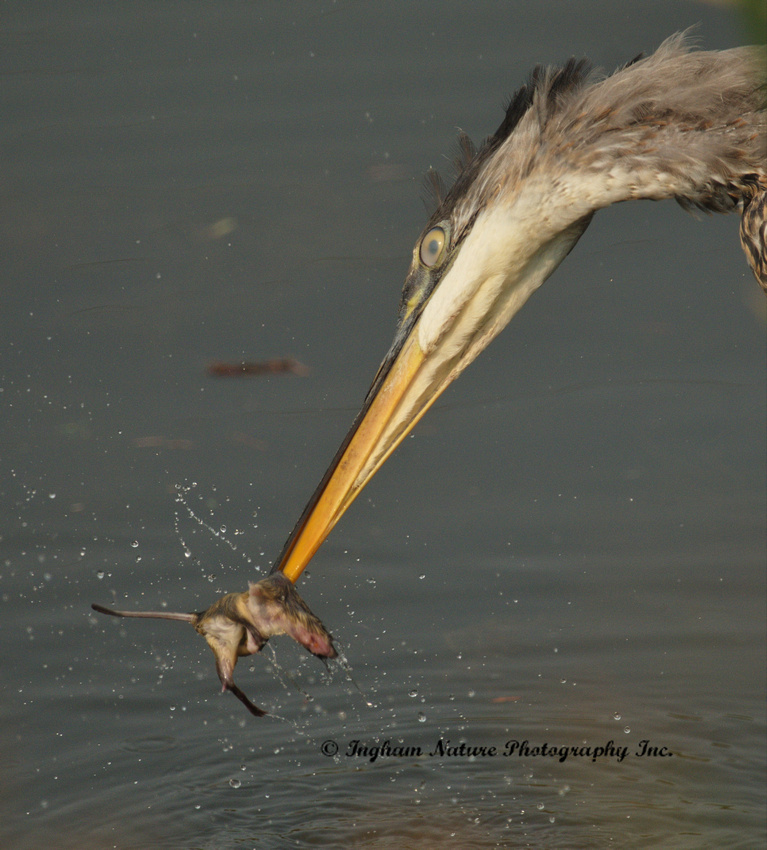 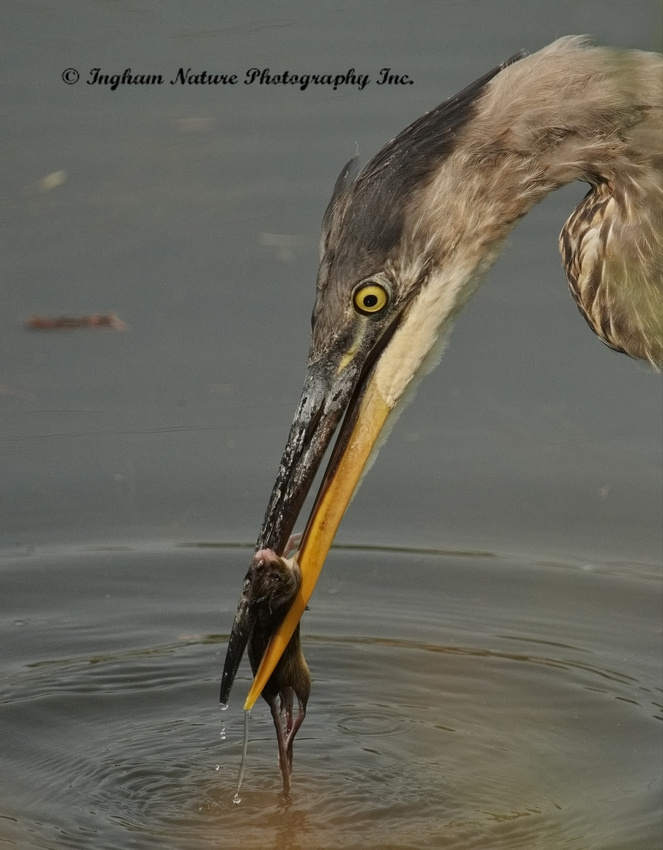 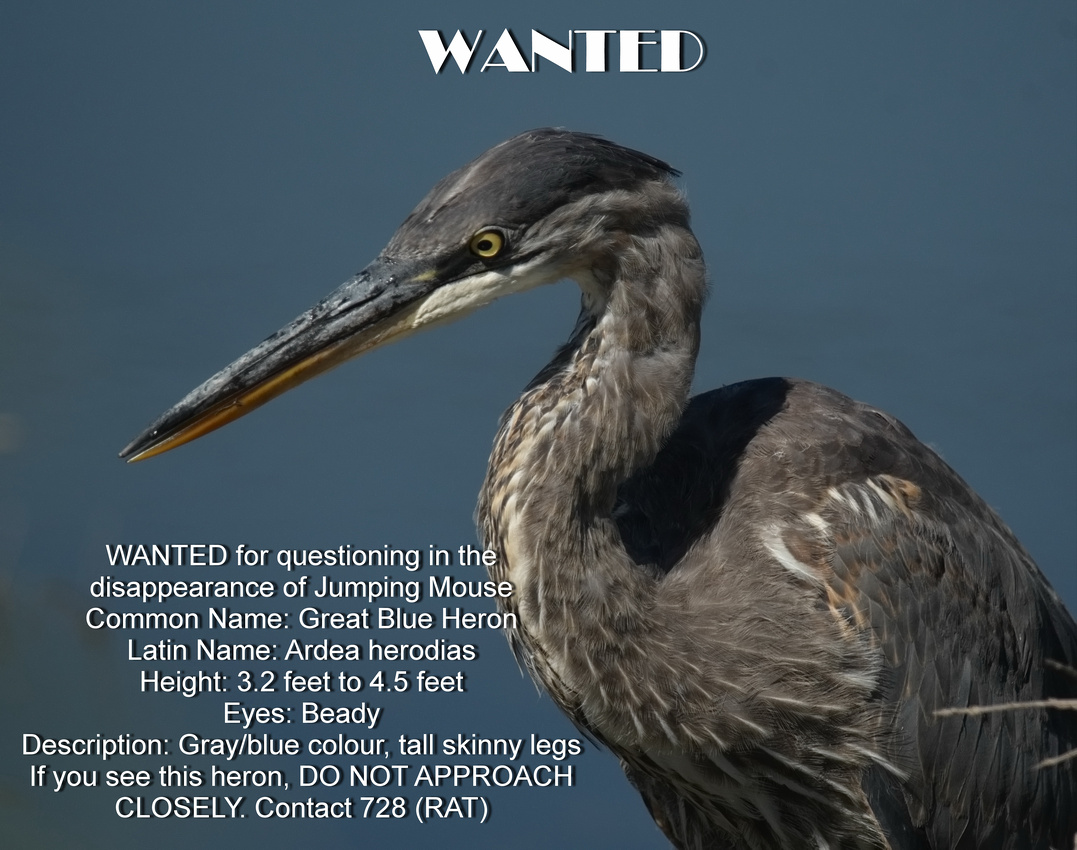 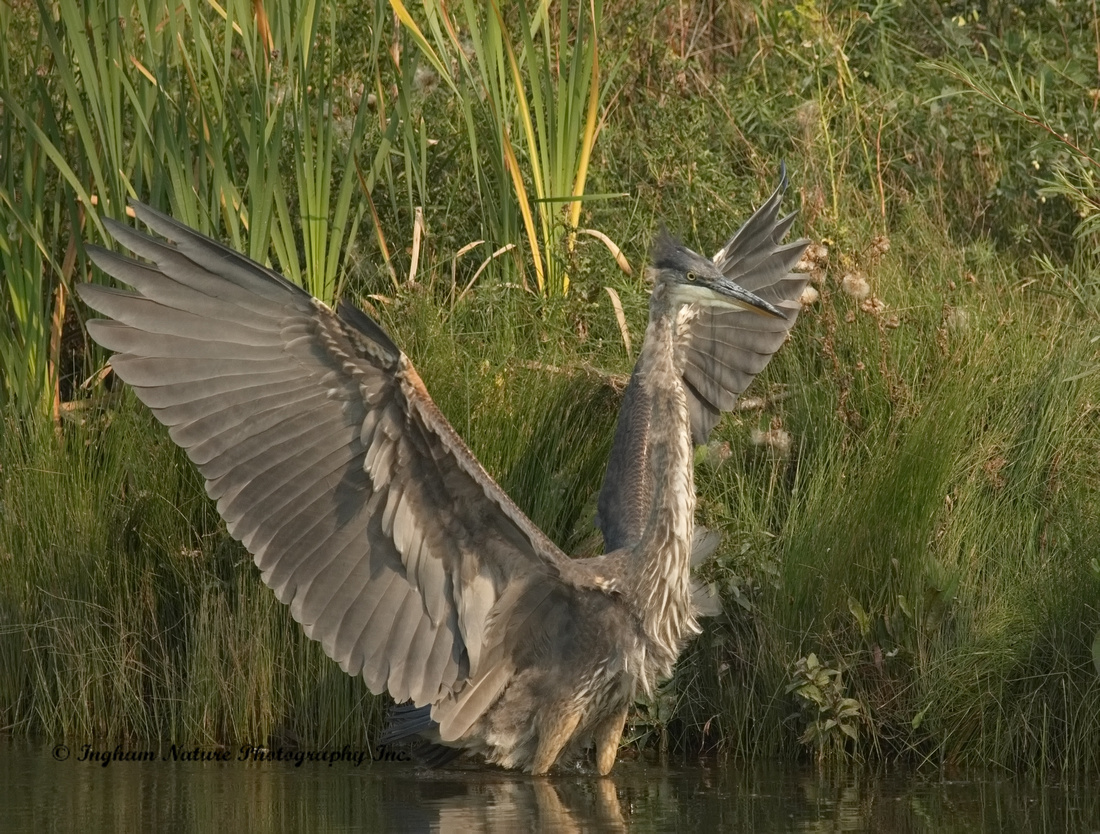 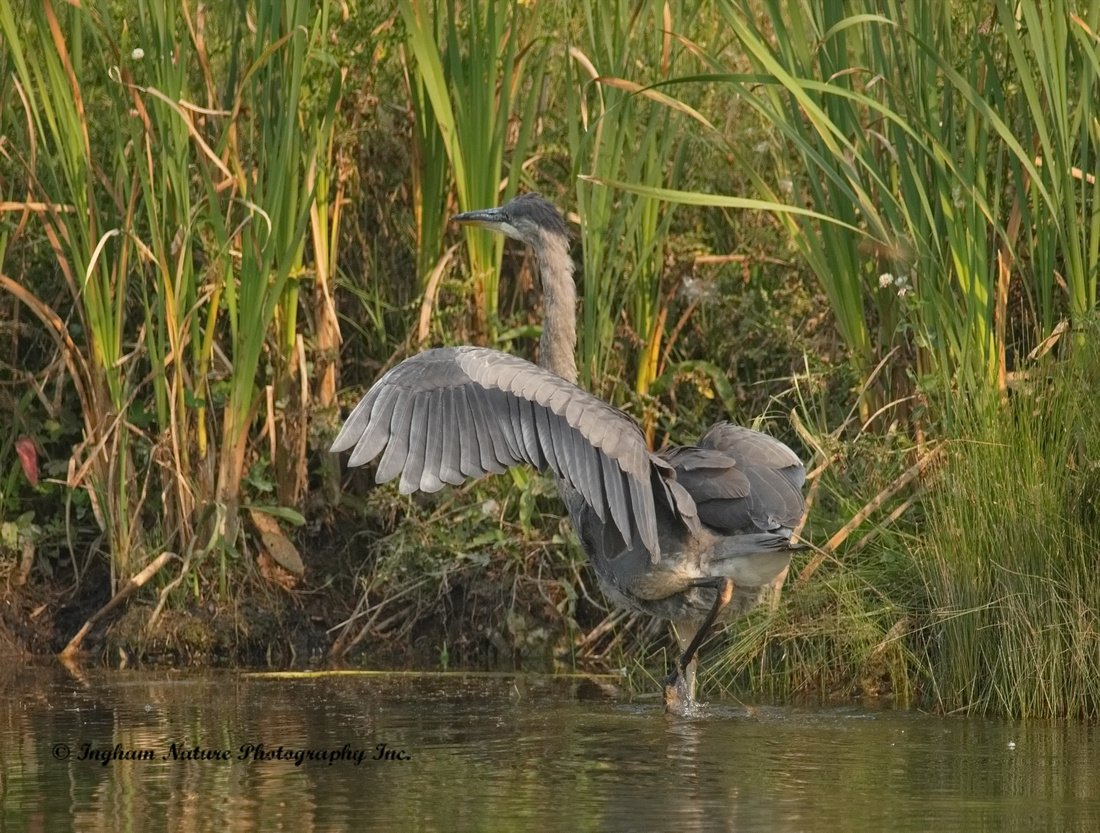 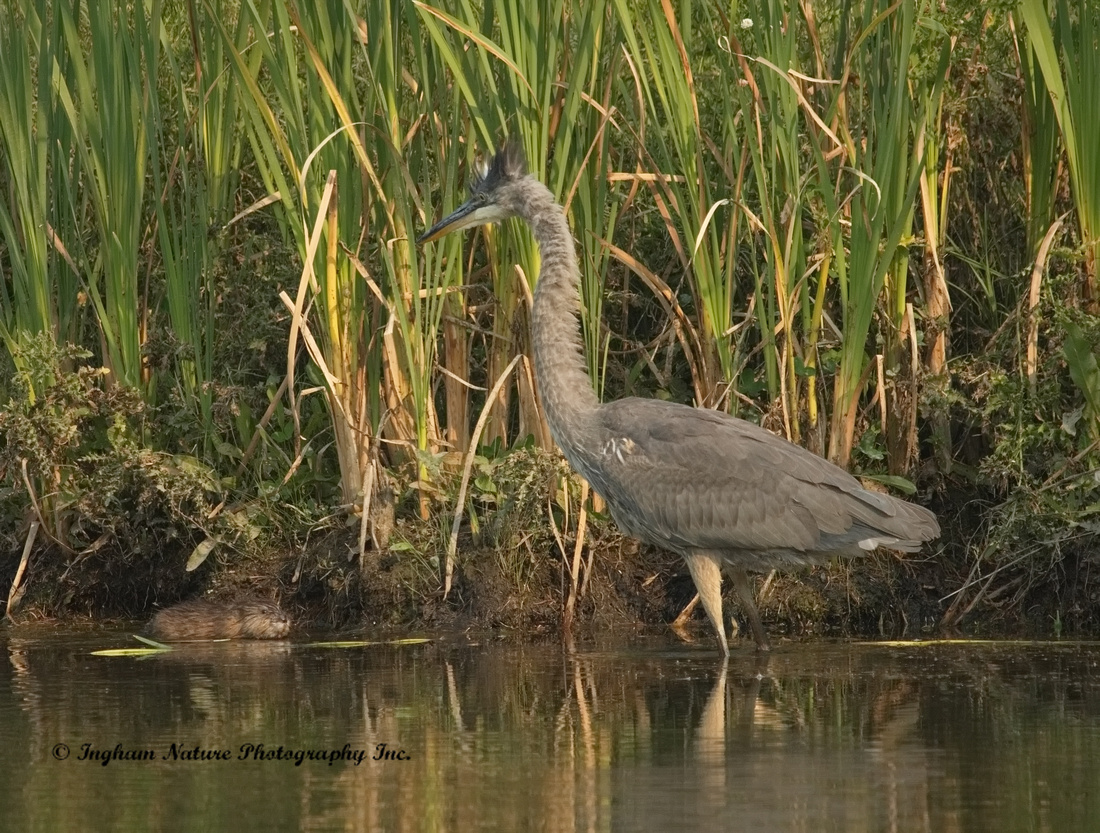 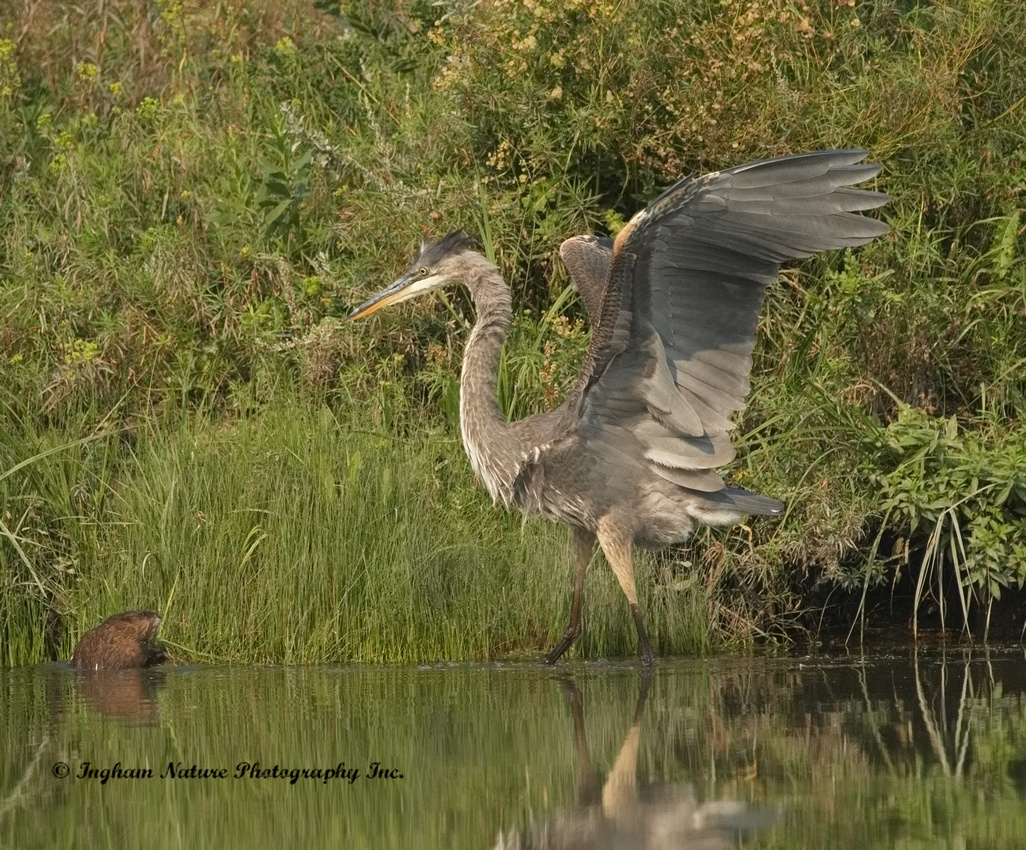 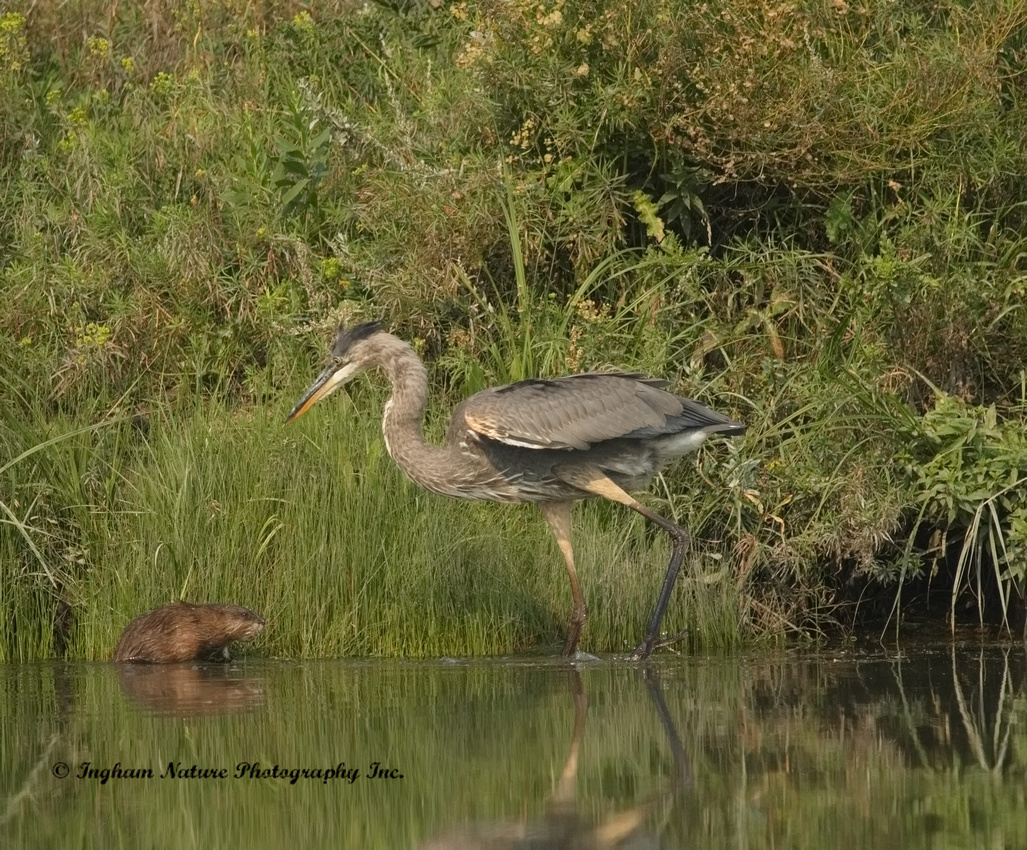 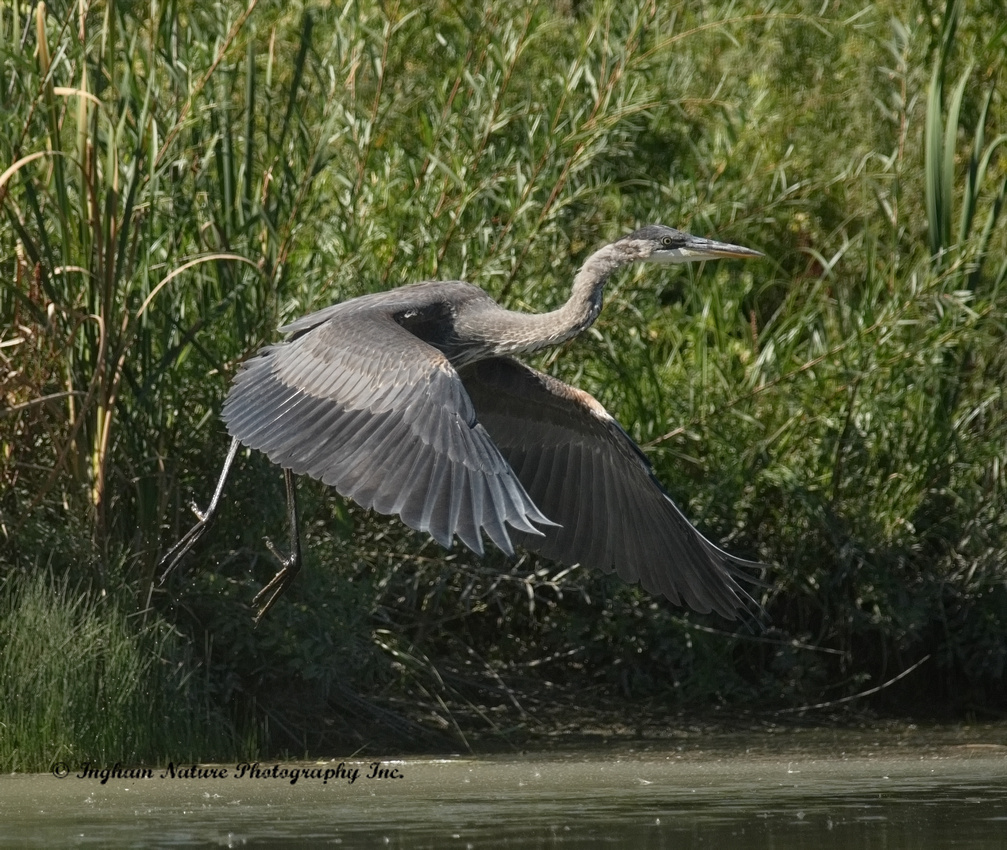