Coming up from downriver late in the afternoon, I spotted a muskrat swimming across the river, then another one. When I investigated further, I could see a little brown ball of fur sitting on a small ice shelf, out of the water.

I then went into that internal discussion with myself. Do I or don't I pursue it? Muskrats, with good reason, are extremely wary & have great hearing. (In the warm months and the birds have returned from the south, they are a favourite food source of herons, both Great Blue & Night Herons.)

It will probably hear me and dive back into the water. Oh what the heck - it's on the way back to the car anyways. So in my stealth mode (with heavy winter boots and noisy traction treads for the icy conditions), I followed the path down, stepped around a large pile of logs, turned around and low and behold the little muskrat was still there.

(The muskrat was sitting on a sheet of clear ice with a small amount of water on the surface. Some of the images contain reflections and some (such as the tail and feet) are the actual mammal just under water.)

Snapped a few shots. The muskrat went quietly back in the water and returned again with some yummy shoots from the river bed. It did that time and time again. At one point, it was joined by a larger muskrat (Photos #7 & #8), who I assume was its parent.

This went on for some time as the sun slowly began to set. And then a large flat rectangular piece of ice came down the river, hit the shelf and scared both of them into the water.

Muskrats are probably not everyone's favourite rodent but they do have cute faces and resemble the water vole of Britain. They can cohabitate with beavers in lodges and have been seen with the use of an inside trail camera, doing needed repairs on the inside of the beaver lodge. So no free ride there! And am sure the beavers appreciate the extra help.

And that log pile I stepped around, was a small beaver lodge! 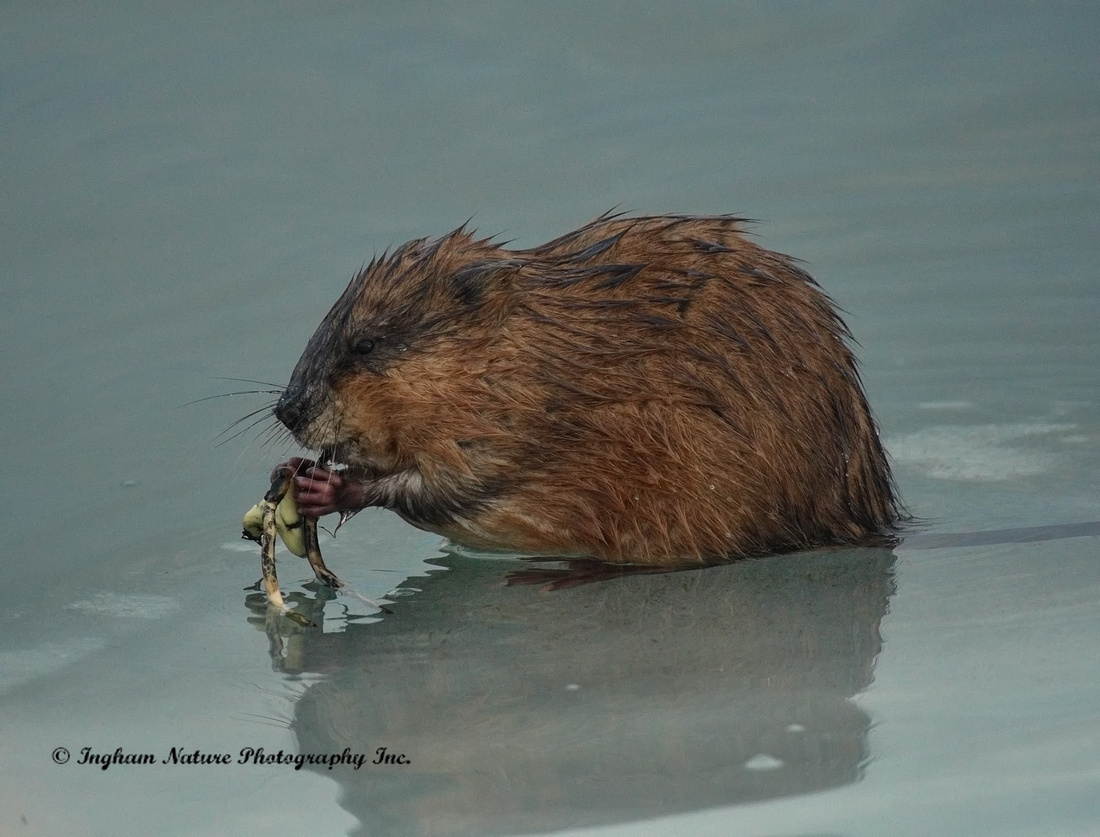 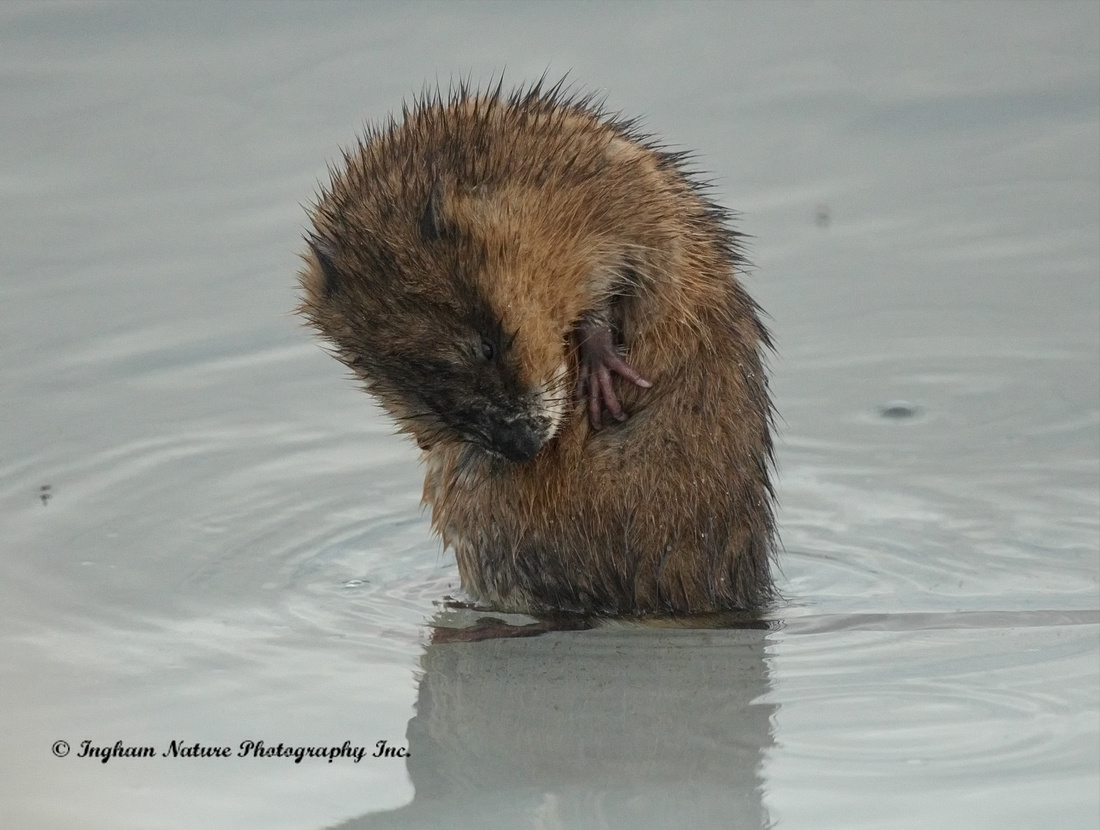 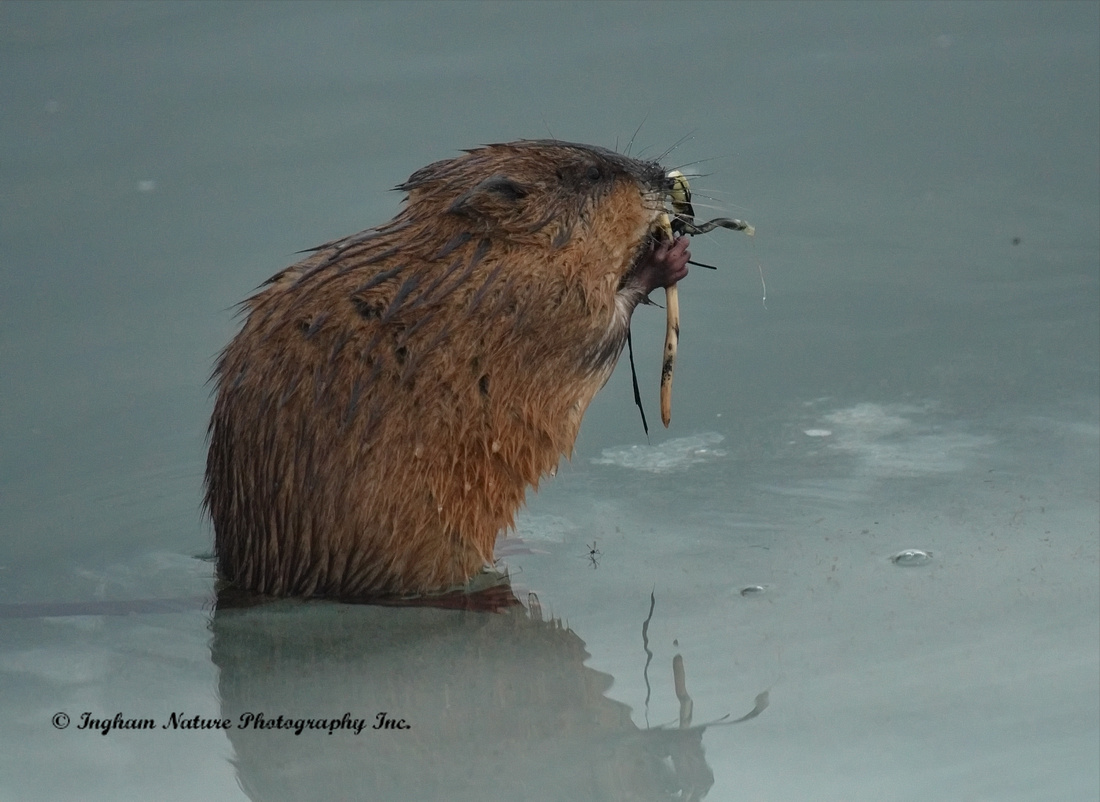 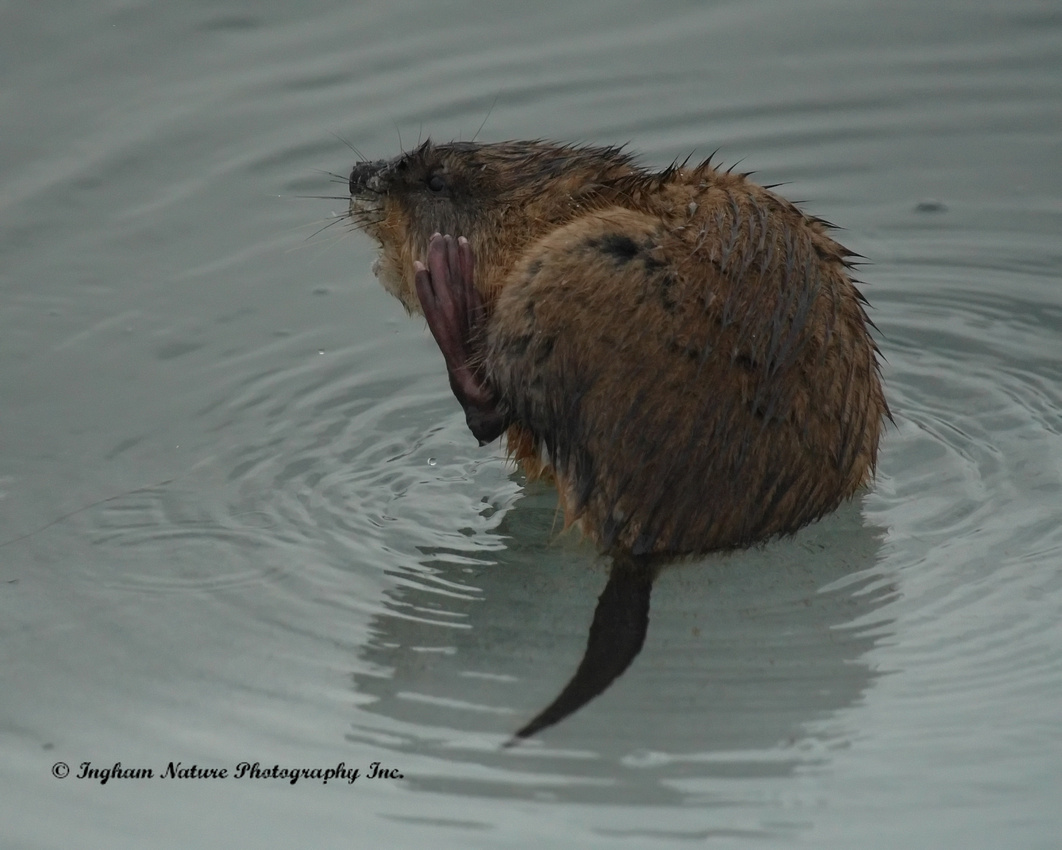 PHOTO #5 - There is something very "Gandolf" from "Lord of the Rings" about this one! :) 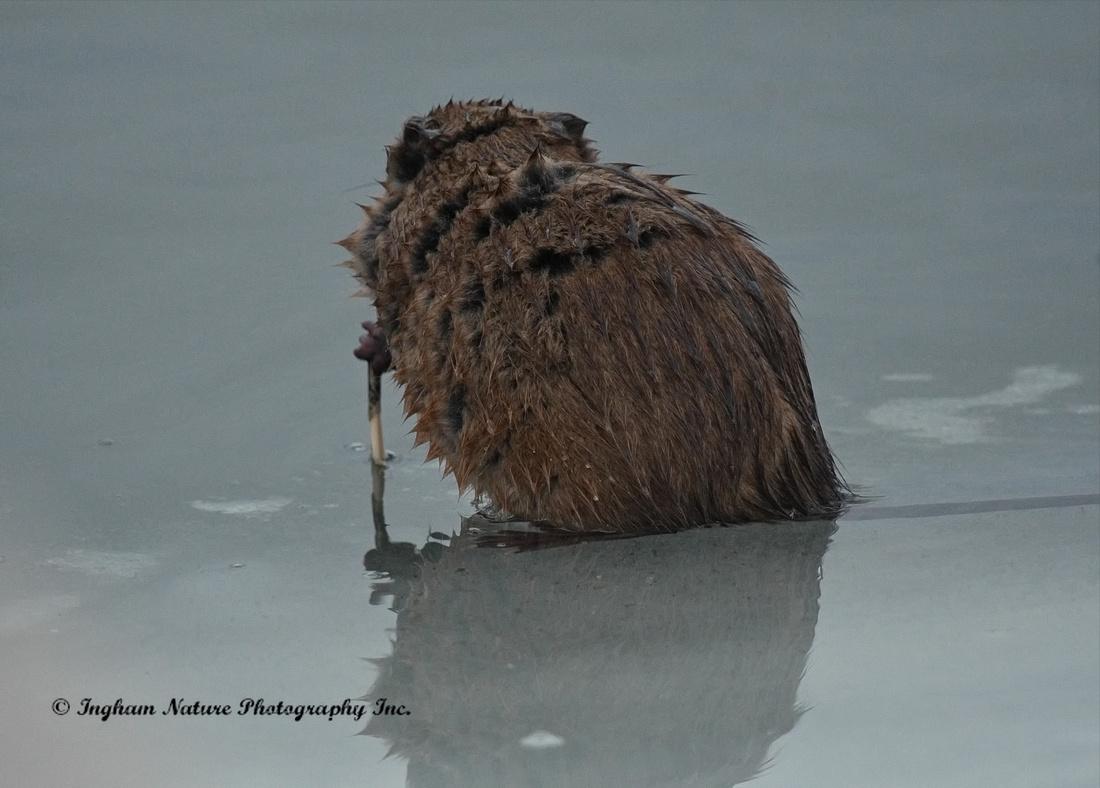 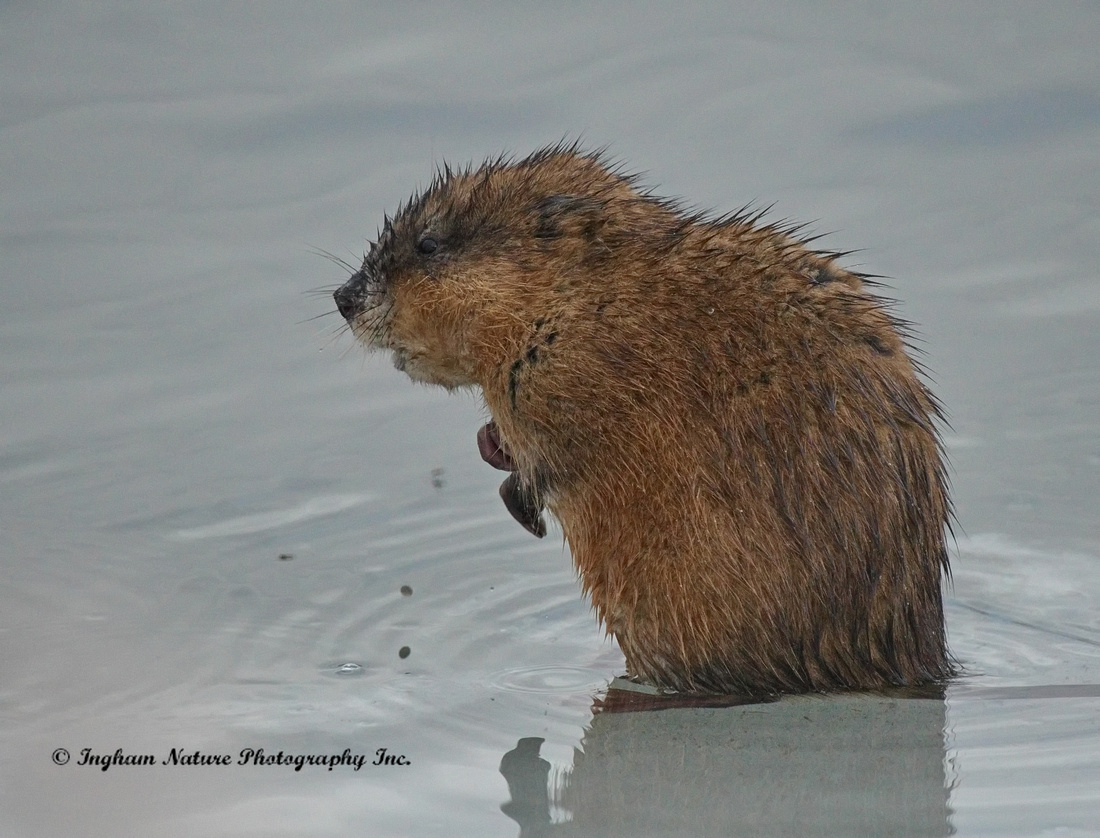 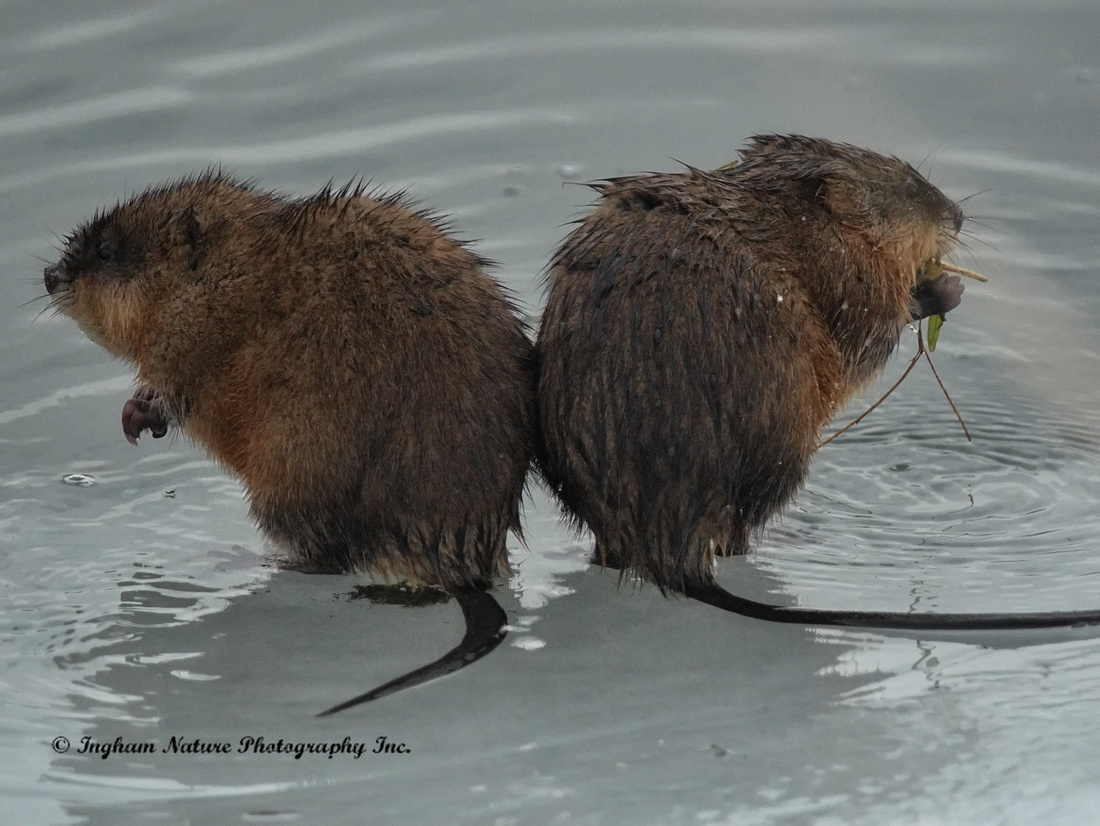 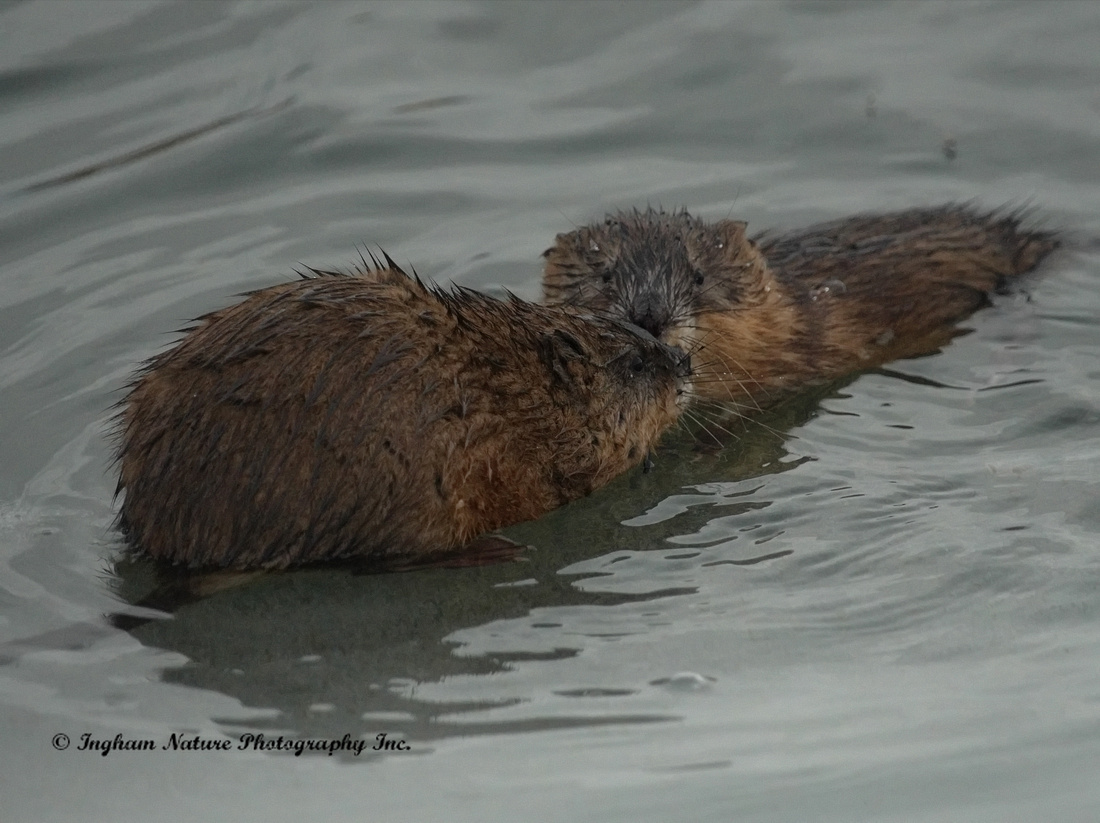 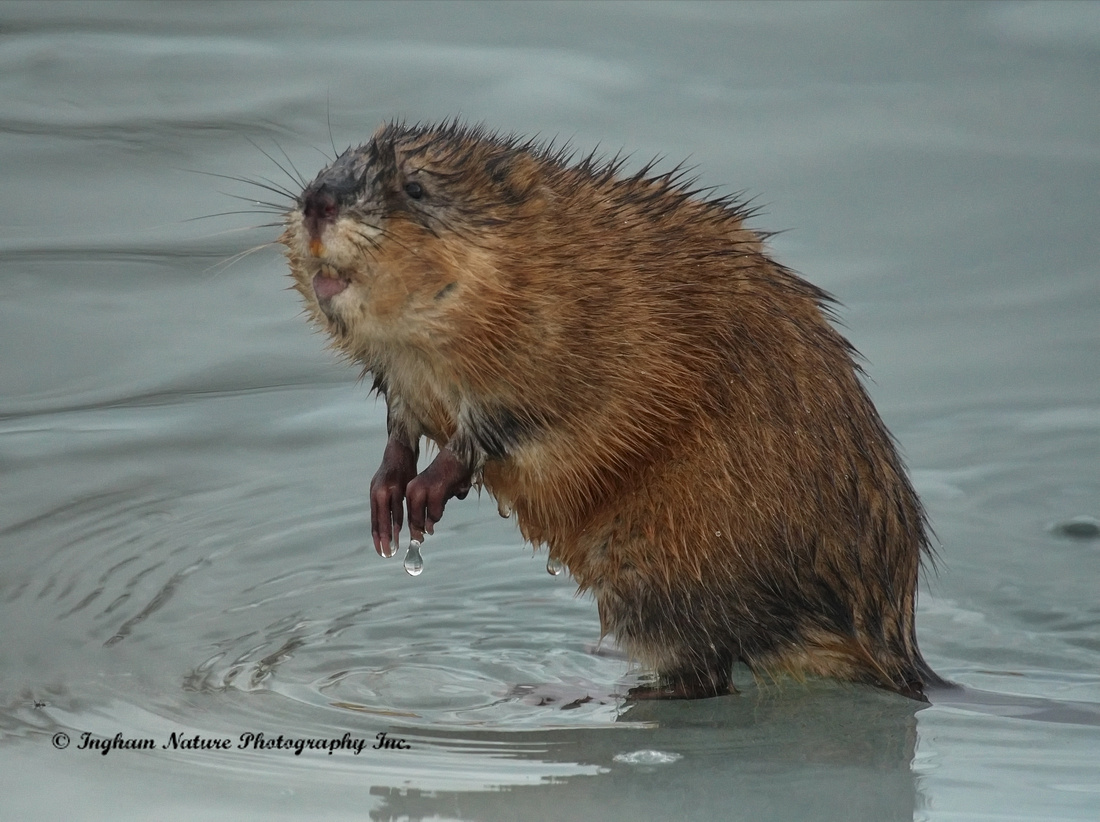 John Harper(non-registered)
Great story and photos. A wonderful glimpse into muskrat life!
Urszula(non-registered)
Oh wow, a unassuming animal like muskrat and such beautiful photos!
I especially like #2 and last one with water dripping from the "fingers".
I've seen them too and have a nice situation when they swim in a circle. I think they were playing, must be enjoying the warm weather.
Greetings!
No comments posted.
Loading...
Subscribe
RSS
Recent Posts
"EACH ONE DESERVES RESPECT & PROTECTION" - Great Horned Owls "LATE TO THE PARTY - PARTY ANIMAL" - Weasel (Long Tailed) "WHAT ARE THOSE OSPREYS DOING NOW?" - Ospreys "LATE TO THE PARTY" - Weasel (Long Tailed) "BLACKBIRD SINGING ..... " - Blackbirds (Red Winged & Yellow Headed) "SPIDERMAN, SPIDERMAN - DOES WHATEVER A ..." - Porcupine (North American) "THE AW FACTOR" - Porcupine (North American) "THE DEMONIC MINK" - Mink (North American) "A WINDOW INTO A PORCUPINE'S WORLD" - Porcupine (North American) "A PREDATOR'S LIFE IS NOT AN EASY ONE" - Coyote
Keywords
Archive
January February March April May June July August September October November December
© Ingham Nature Photography Inc.
Powered by ZENFOLIO User Agreement
Cancel
Continue