"EVEN HUMMERS CAN BE GREEN" - Hummingbird (Calliope) - Juvenile

"EVEN HUMMERS CAN BE GREEN"

So there I was sitting by the creek, hoping for a mink sighting (sigh) and watching two American Goldfinches flying in and around.

Wouldn't it be a great shot, I thought, if one of the finches would land on the newly opened flowers of a thistle, about five feet off to my right. What a great photo opportunity of the bright yellow bird against the pink.

Then something caught my eye. At first I thought it was a dragonfly flitting about the thistle flower, then my brain went to "hawk moth" and then it suddenly dawned on me, it was a hummingbird! And as soon as I thought "hummingbird",  a little songbird flew by and scared it off.  That was another "darn".

So I waited and maybe 10 minutes later, back came the little darling again. I guess the nectar in that thistle flower was just so tempting.

It hovered to the back of the flower and then finally flew clear so I could get some shots. After about 8 minutes, it flew away, leaving me in awe. And for this extremely tiny little bird, just one stop on its long migration south. How such a small creature can make such a journey of thousands of miles, is one of Nature's incredible stories.

I sent the photo off to Brian Keating, the Calgary naturalist who is a regular guest on Calgary's & Edmonton's CBC Radio. He kindly reached out to three brilliant colleagues of his, who all identified it as a juvenile Calliope Hummingbird.

So even some Hummers can be green!

And please check out Brian's amazing sighting on a hiking trip to Sunshine Meadows in Banff, Alberta, CA. Link below: 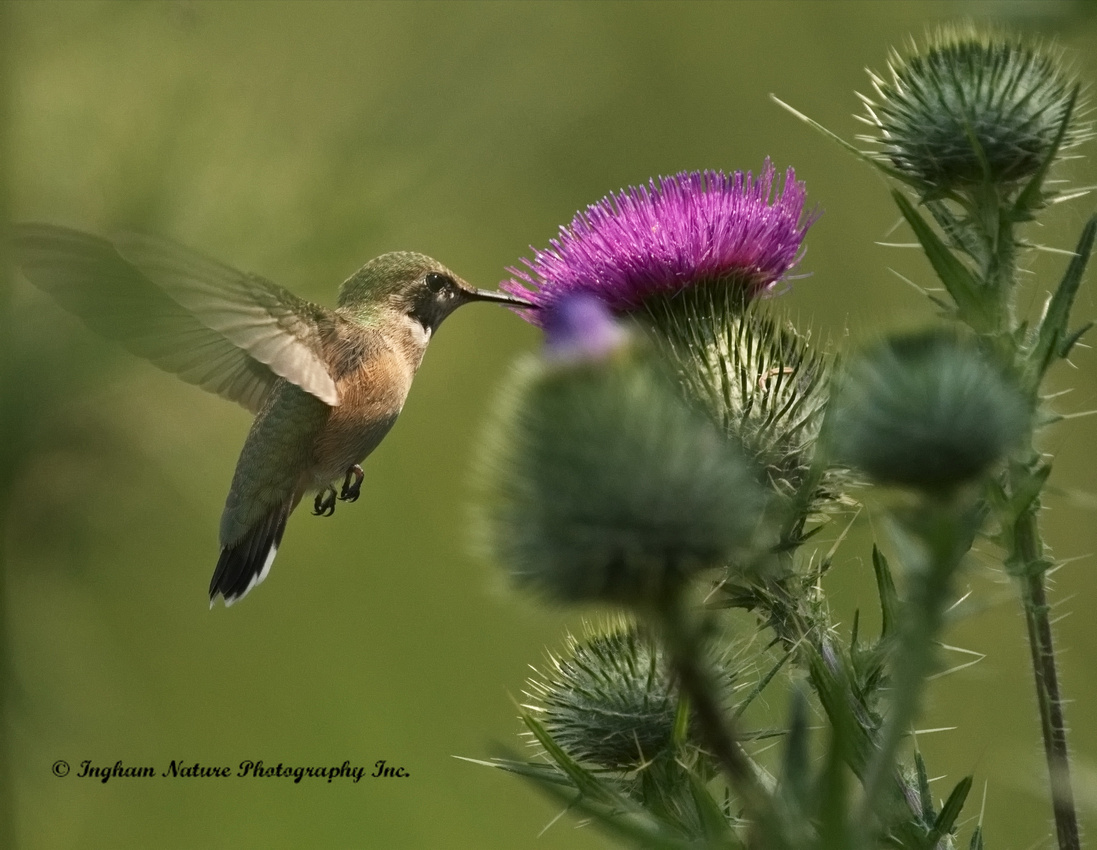 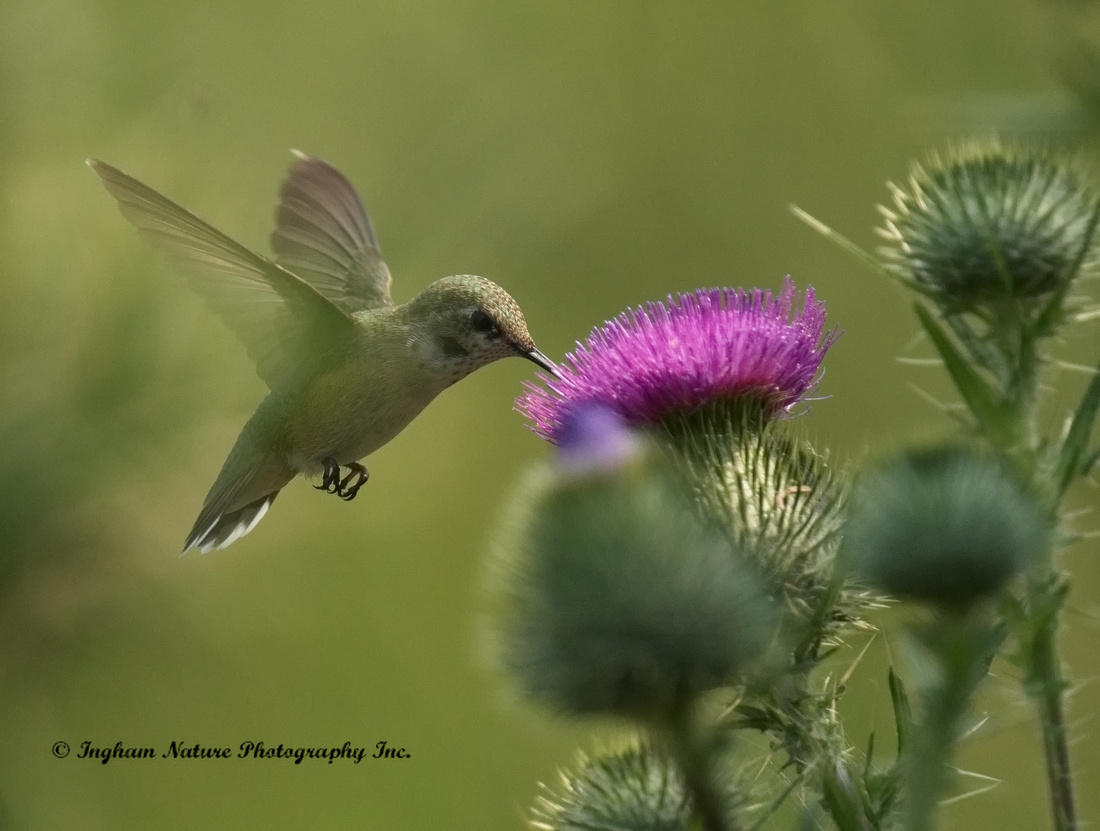 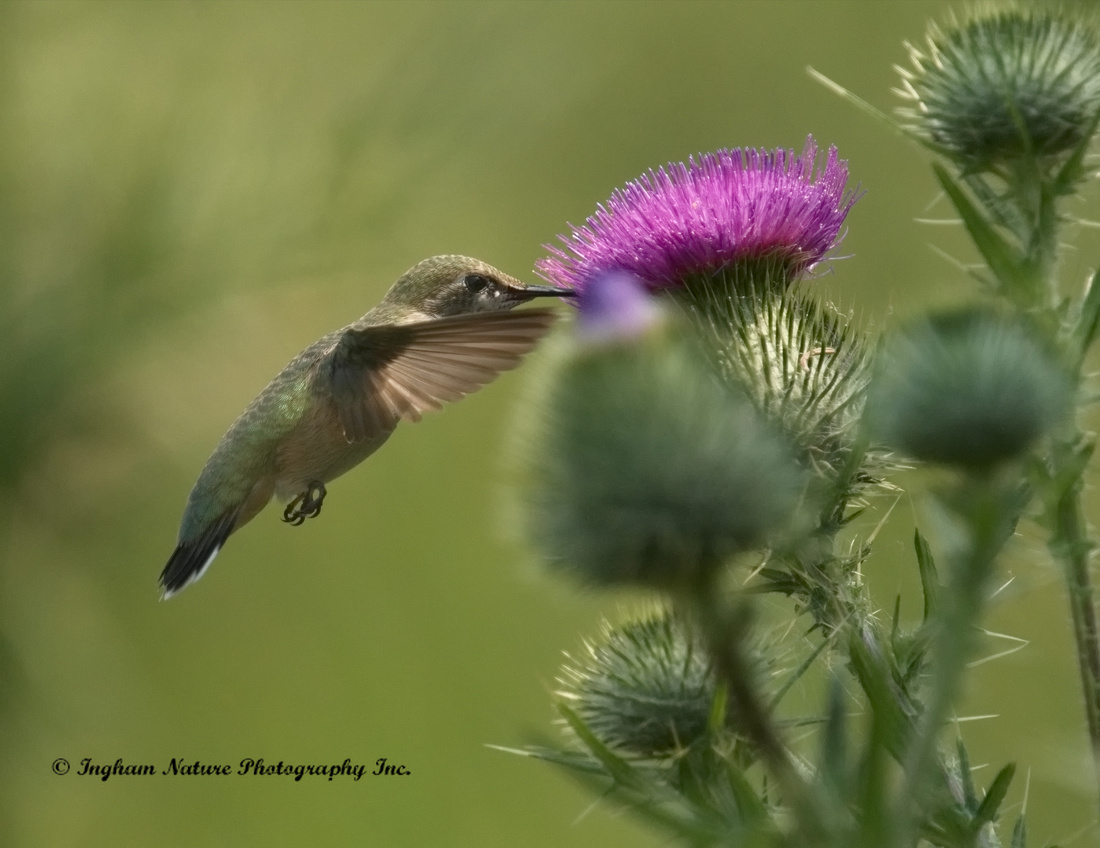 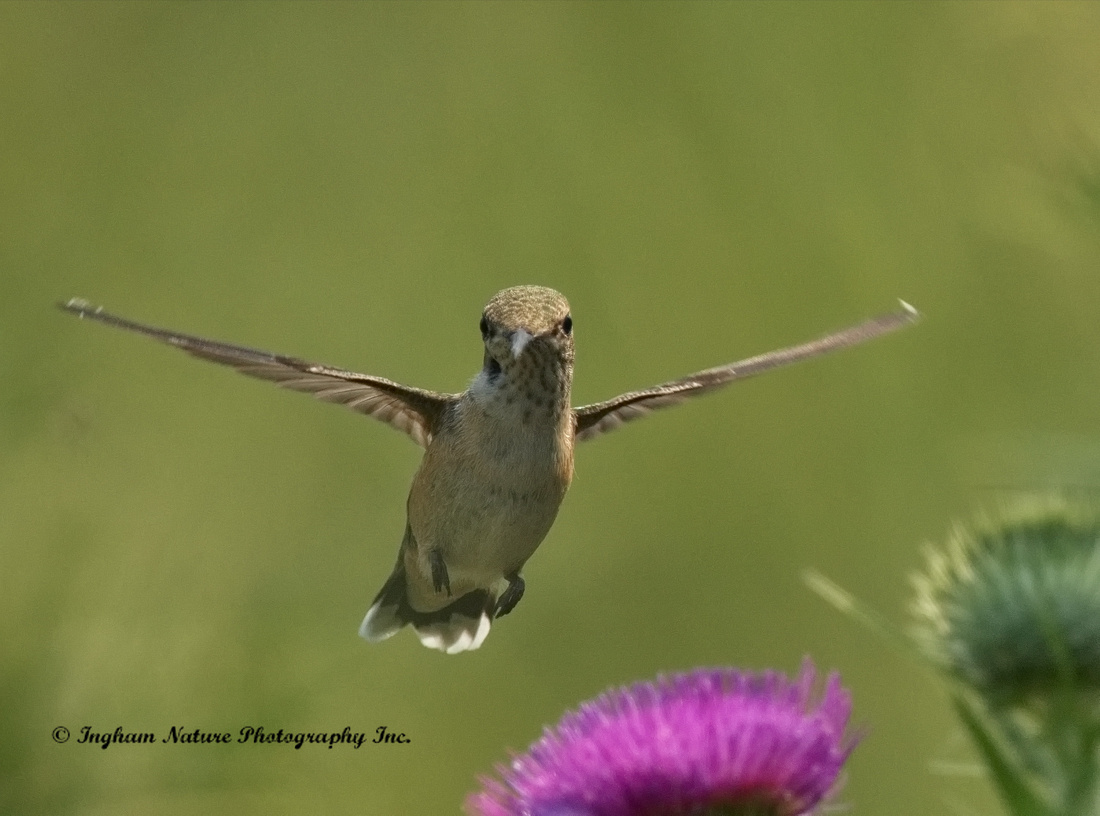 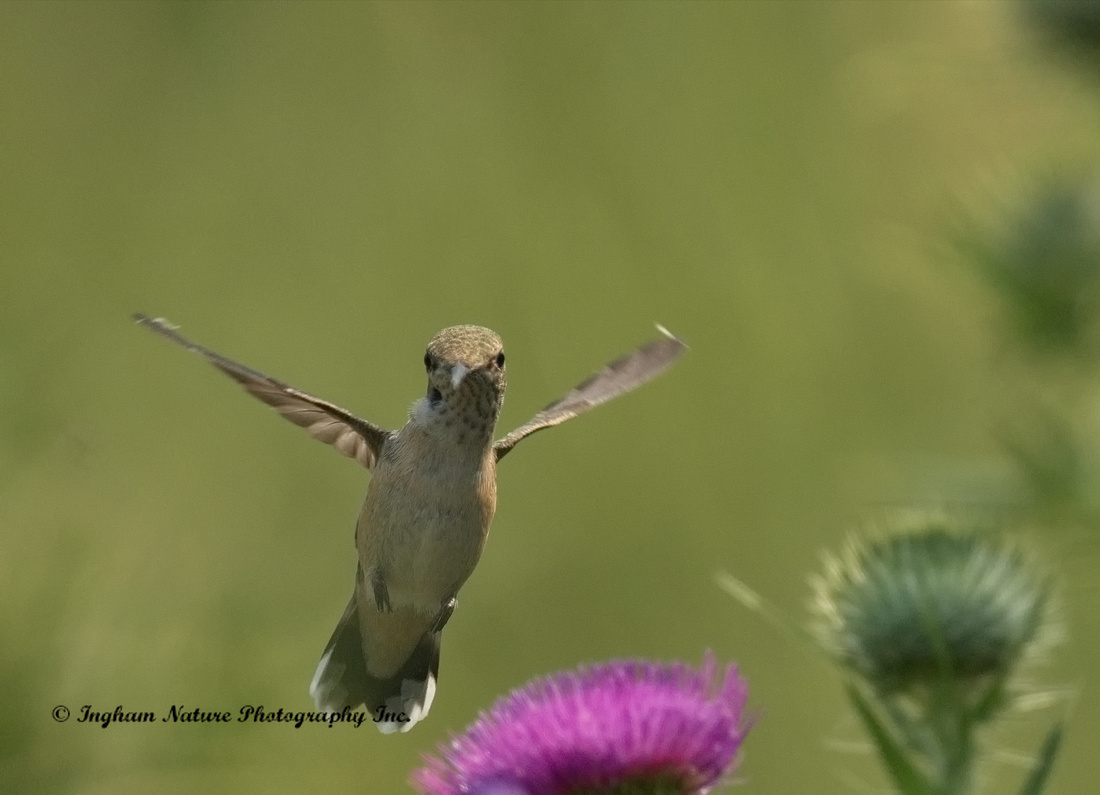 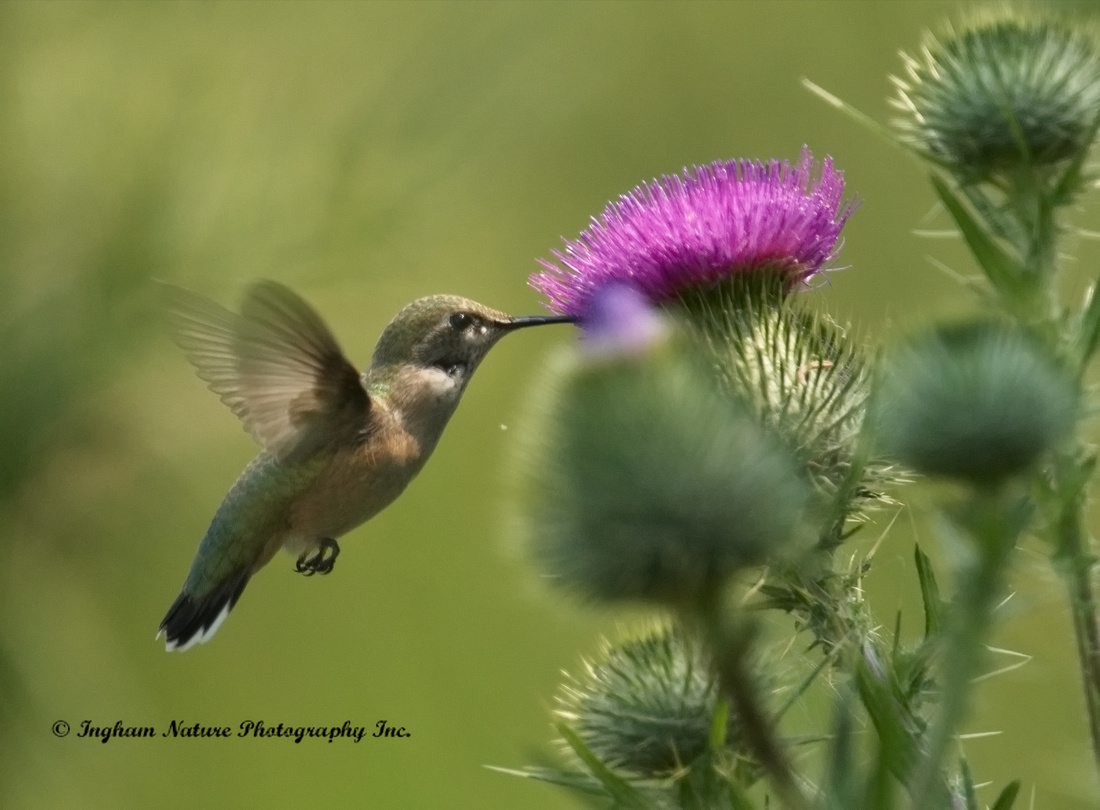 Garnet Verhoog(non-registered)
Wow great beautiful pictures
Nigel(non-registered)
Maybe it was tempted to travel North from the Excited States by your recent heatwave? We did see some hummingbirds a few years ago in the Okanagan one evening. The only ones I have ever seen in the wild.
What is the time frame for the photos, was it just a few seconds - camera on continuous shooting?
No comments posted.
Loading...
Subscribe
RSS
Recent Posts
"SNOW BABY" - Porcupine (North American) "THE WEASEL'S ALTER EGO" - Weasel (Long Tailed) "TAKE A WALK ON THE WILD SIDE" - Porcupine (North American) "PULLED ON MY HEART STRINGS" - Raven (Common) "ME AND MY SHADOW" - Weasel (Long Tailed) "THE SUN DOGS WERE BARKING" - Beaver (North American) "SHOULD HAVE BROUGHT MY HARD HAT!" - Woodpeckers (Pileated) "BELOW ZERO" - American Bald Eagle (Immature) "HERE COMES KRAMPUS" - American Bald Eagle (Immature) "LOVE IS IN THE AIR" - White Tailed Deer (Male)
Keywords
Archive
January February March April May June July August September October November December
© Ingham Nature Photography Inc.
Powered by ZENFOLIO User Agreement
Cancel
Continue