So was just about to enter one of the Provincial Parks in Alberta when I saw what I thought, for a micro second, was a new piece of commissioned art at the park entrance. Alberta Parks have been updating signs, etc. so for that split second I envisioned statue.

Well it wasn't. Thank the stars, it was a gorgeous red fox sitting absolutely still on top of a flat rock, completely clear of vegetation. The rock was one of two flat boulders and as it was late afternoon, I believe this member of the canid family was warming itself on the surface of the rock. It must have been really toasty with the late summer heat of the sun. Perhaps a fox's form of hot stone massage therapy :) At the same time, the rocks provided an excellent vantage point (safe from view and sound) of the rodent population which I am certain was living in the underbrush.

And then there is the colour coordination between the fox's fur and the lichen on the rock. Hmmmm?

Over the course of the next 30 minutes (yes, that would be 30 minutes), it changed positions and then eventually moved down the rocks into the grassy area and finally down the hill to the creek below.

I've only seen foxes once before in Alberta and that was young kits. Click on the link below if you wish to view the photos taken in Southern Alberta, several years ago. However, this latest experience was one for my photography books!

After some scrutiny of the photos, I believe this fox to be a young female and what a stunner she is. Her entire demeanor was relaxed but never missing "the big picture" of hunting.

This is Part 1 of 2 blogs featuring this North American Red Fox. Part 2 will follow approximately one week from now.

N.B. ALL PHOTOS TAKEN FROM A SAFE DISTANCE & LOCATION 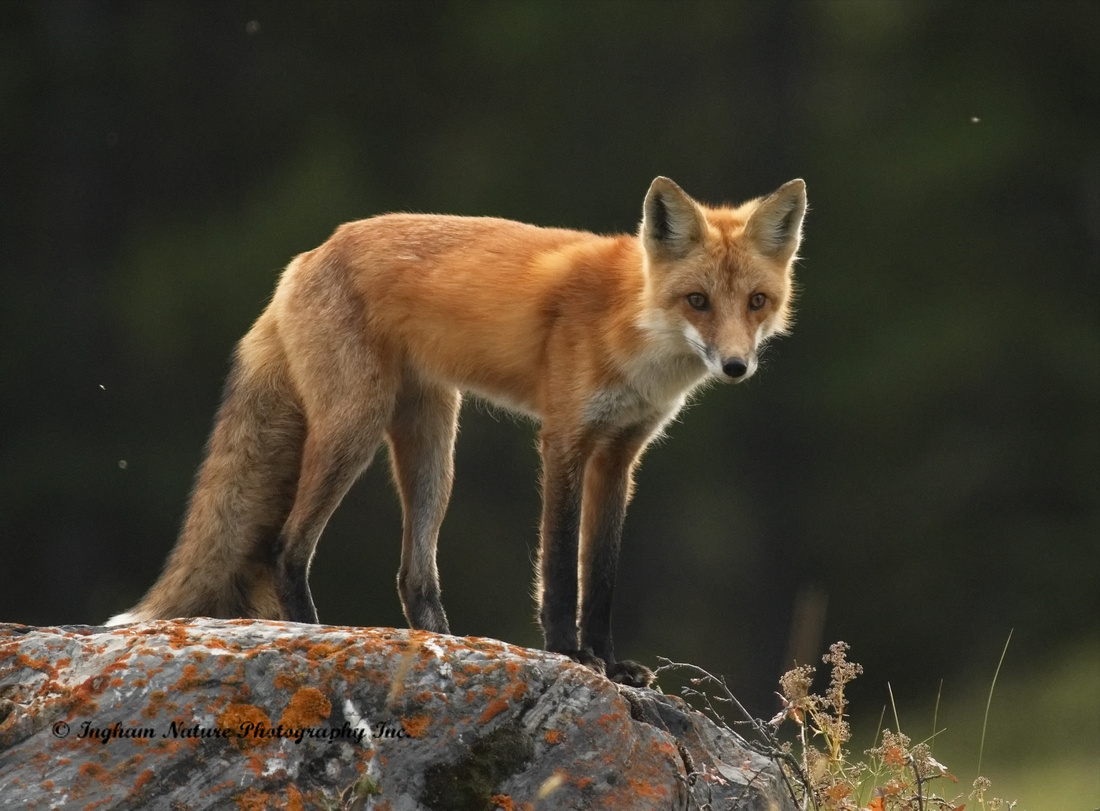 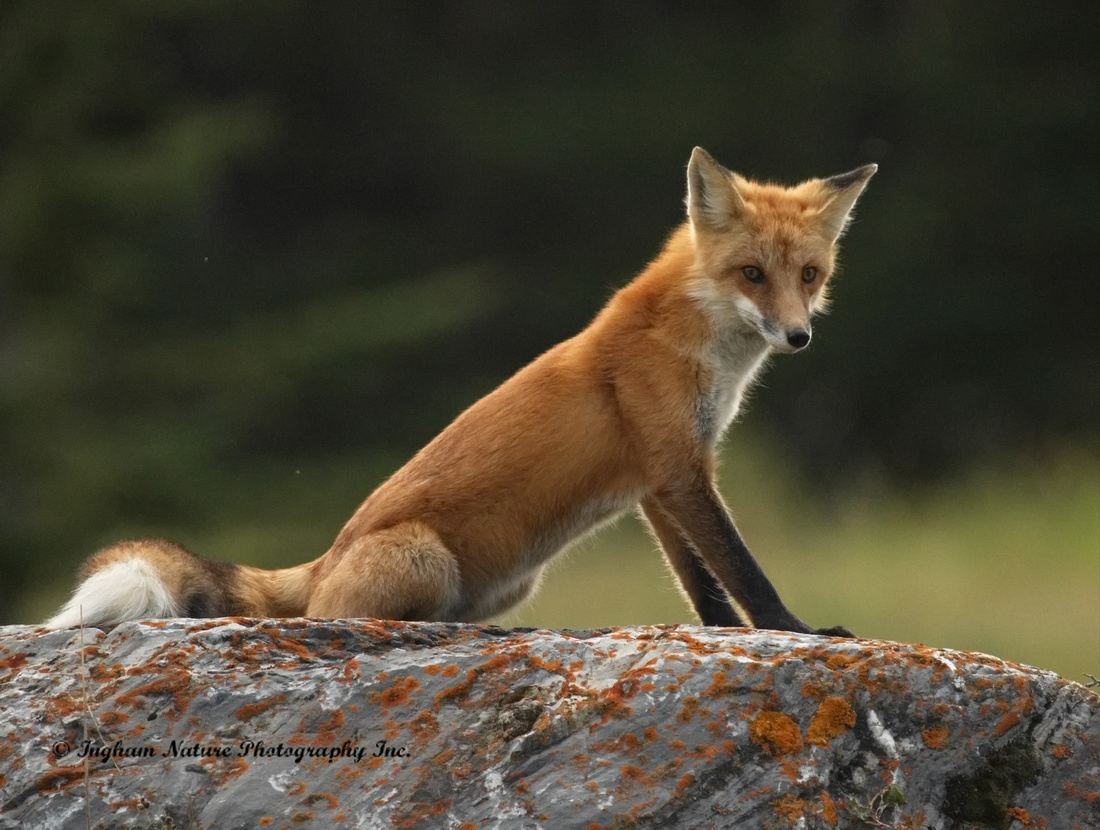 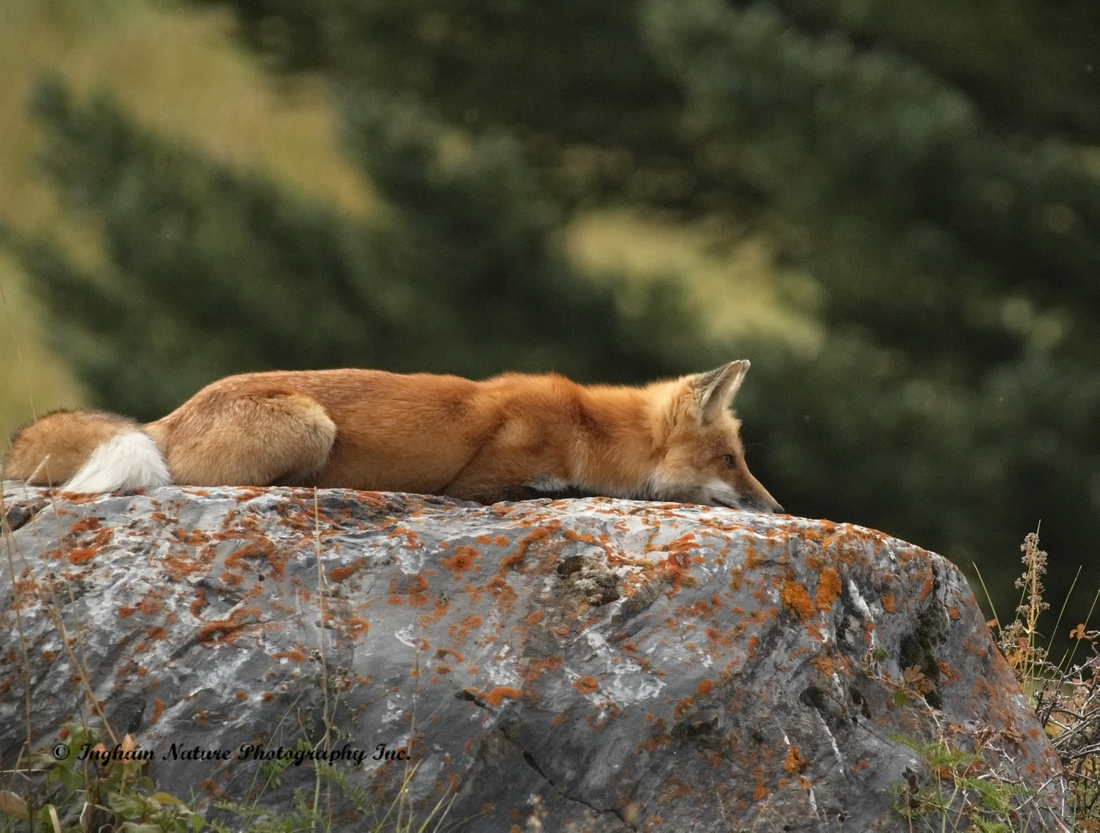 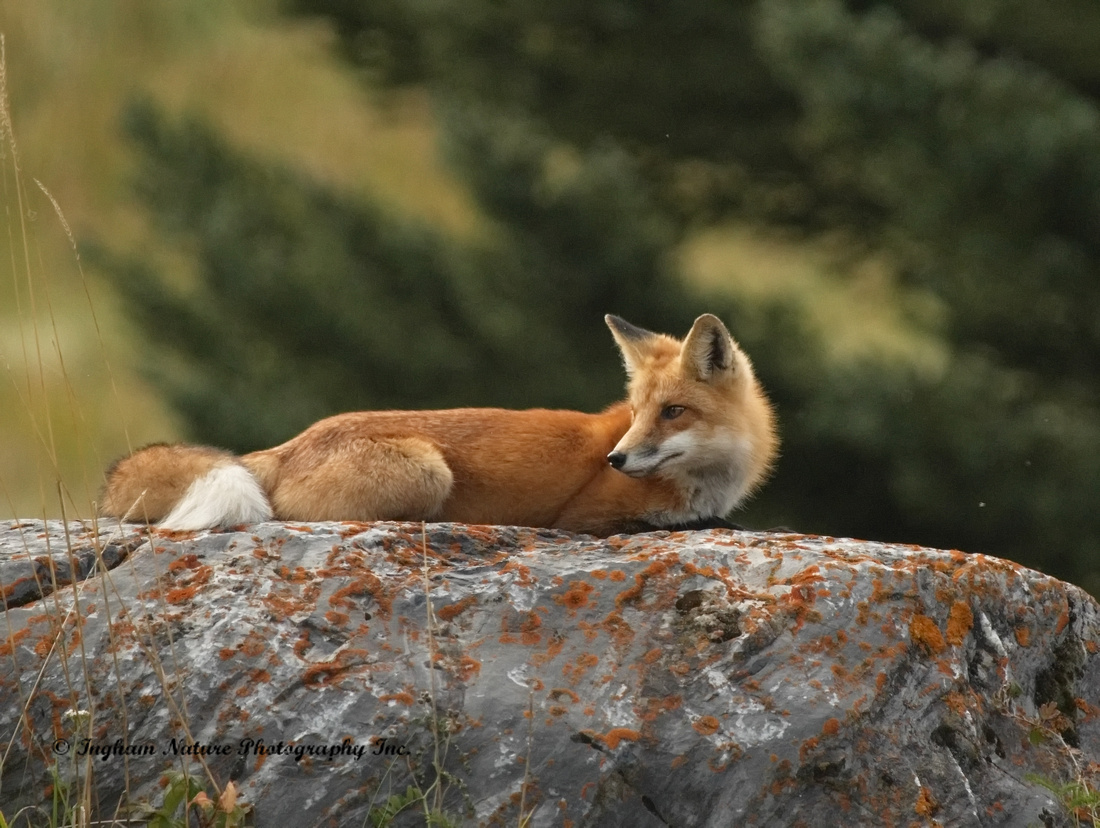 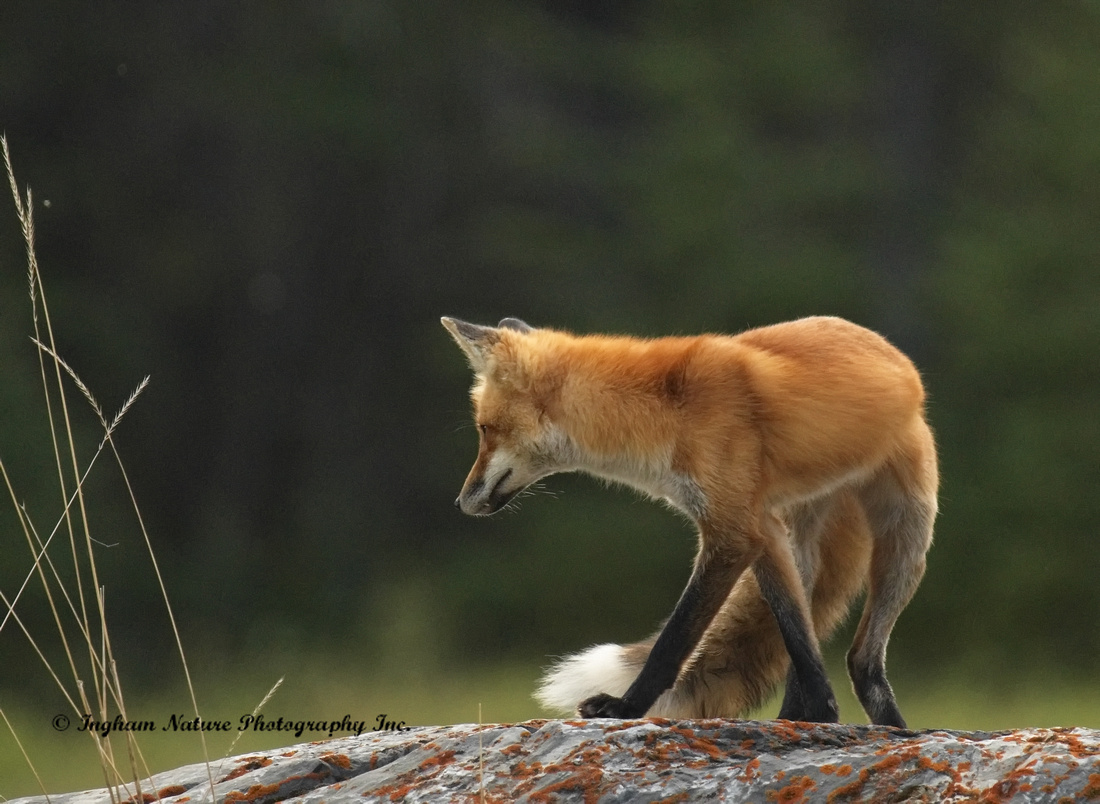 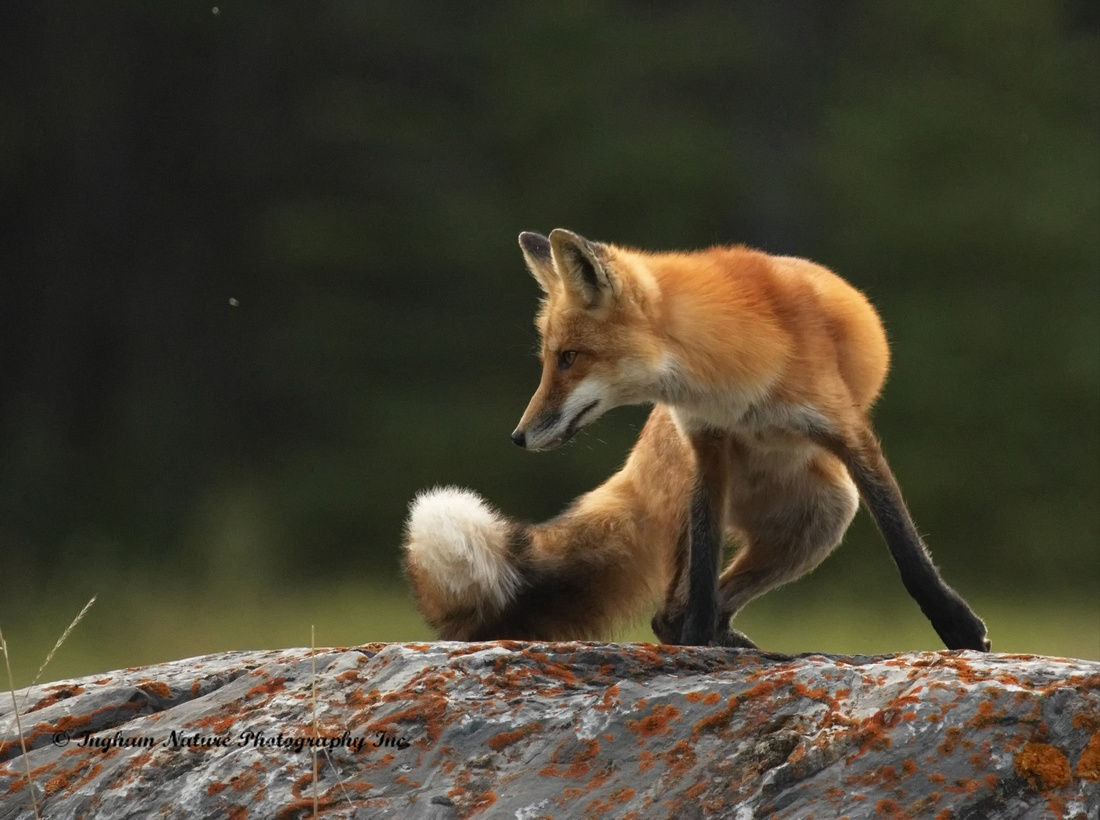 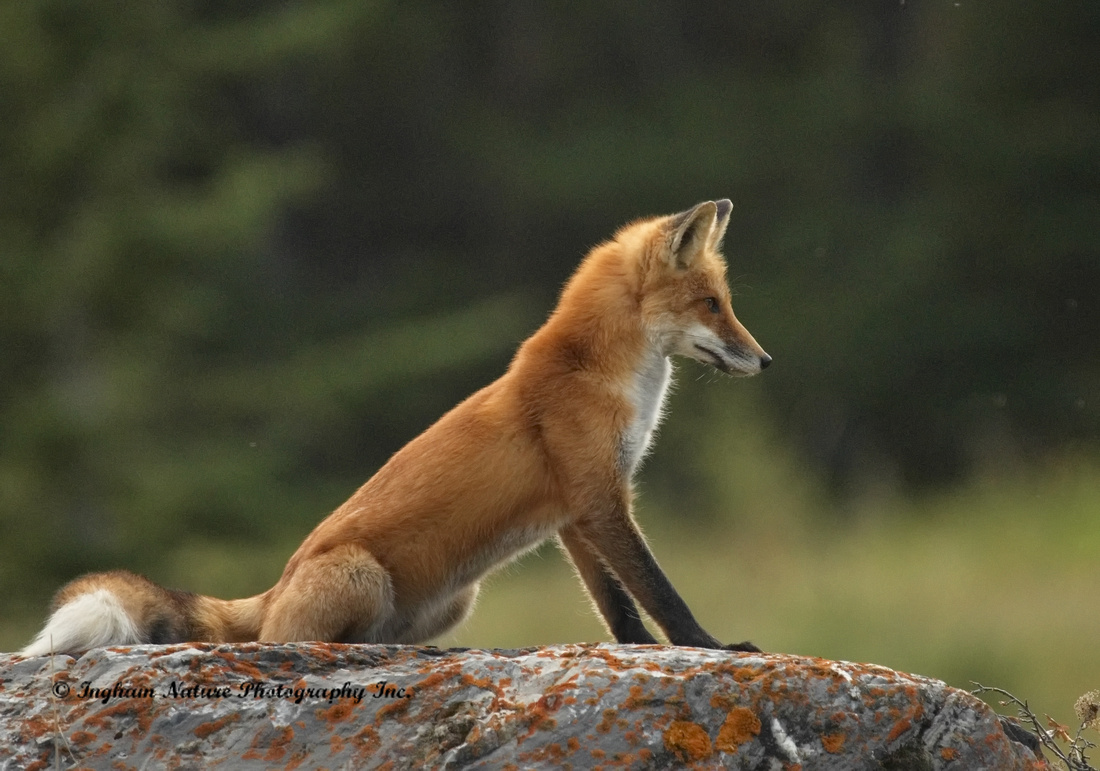